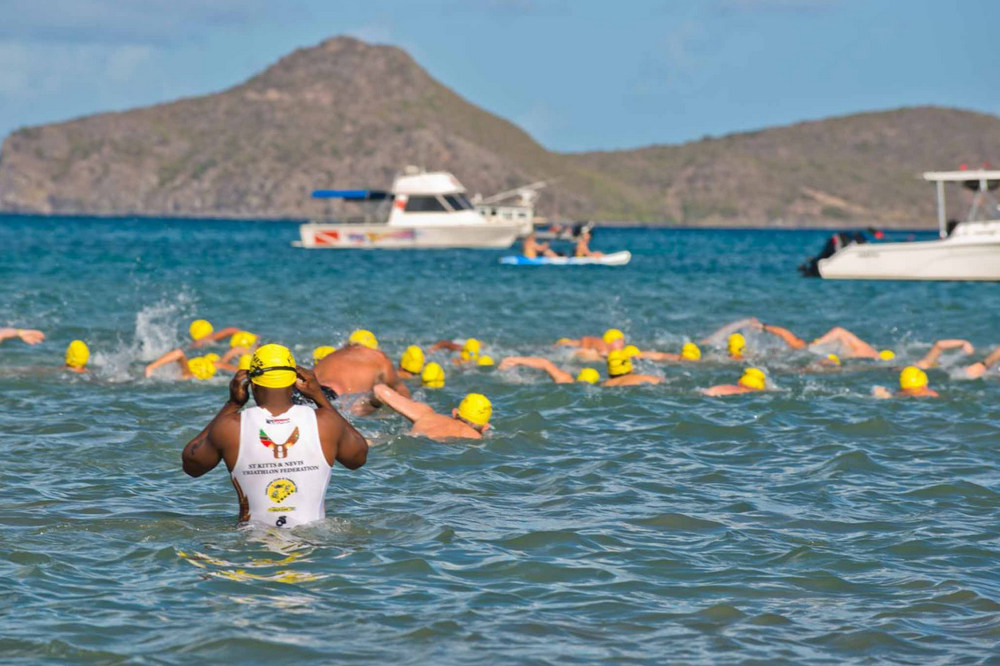 Woolly mammals did not spring to mind when I contemplated the creatures I might encounter on a Caribbean swimming holiday. But as I gaze out at the deep blue Atlantic Ocean, whipped up by the wind dancing across the waves, my taxi driver, Bernel, reveals that the local expression for foam-crested waves is "the sheep are feedin'".

As we drive on, it emerges that his native island of Nevis is also home to a surprising number of (real) goats, monkeys, donkeys and stray dogs, all foraging in the verdant green hills.

While the Caribbean calls to mind images of lazing on deckchairs sipping cocktails, Nevis also offers more energetic pursuits, such as cycling and hiking.

I am here for a preview of a new aquatic adventure tour with SwimTrek, a company that runs swimming adventure holidays in 40 different locations around the world, from the Caribbean to the Baltics.

The week-long itinerary features guided swimming and snorkelling averaging three kilometres a day, exploring the tropical coastline. It offers visitors a different perspective on the island, and curious first-timers, such as me, are as welcome as fitness fiends attracted by the more challenging swims.

Experienced guides lead the way and you can jump aboard the escort boat or miss a swim entirely if you don't fancy it.

"Try not to put your feet down to avoid treading on an urchin or fire coral," says Nedd, my guide, who kayaks alongside once I have donned goggles and cap.

Slightly anxious, I follow his advice religiously, trying not to think about the risk of meeting a shark. Nurse sharks are not uncommon in these parts and blacktip reef sharks are also known to cruise deeper waters.

When a shape looms out I jump, but it is only a young turtle. I am instantly captivated, while it is clearly the more startled, darting off out of sight. Above water, I'm surprised to see what look like warning signs on the rocks ahead, until they come into focus through my slightly fogged-up goggles as a pair of pelicans, standing like sentinels.

Though the shoreline is dotted with luxury hotels, the beaches are largely deserted throughout my 40-minute swim. Unlike much of the Caribbean, Nevis remains relatively little-known and strict planning laws limit all buildings to the height of a palm tree, restricting the mass tourism which has blighted other islands.

After a brief rest I change into snorkelling gear, following Nedd, who soon spots another turtle. Hawksbills, leatherbacks and greens all nest here between March and November and beach patrols by conservationists, which tourists can join, help to protect the endangered creatures from poachers.

As well as these shorter swims, next year's programme will feature the annual four-kilometre mass swim from Nevis to its sister island, St Kitts, now in its 13th year. The swim attracts almost 200 people, with a mix of tourists and young athletes from around the Caribbean.

I can do a kilometre-and-a-half in a pool with ease, but I've never gone much further or swum any distance in the sea. So, I'm reassured when Winston, founder of the channel swim, the Nevis Triathlon and the Bike Nevis activities company, says most people taking part have no open water experience either.

He invites me to join him in training, doing 50-metre lengths between two buoys moored off Oualie Beach, where the annual crossing starts. St Kitts looks pretty distant as I plough back and forth, easily lapped by Winston and Alex, a young local contender.

Swimmers next year will benefit from new water stations on three boats moored at equal intervals across the Narrows, the strait that separates Nevis and St Kitts.

The floating stations will also be handy landmarks to keep the masses on course – something, Winston guffaws, that is sometimes "like herding cats".

He has never had to postpone the mass swim itself, but unseasonable squalls right now mean that I can't yet make a solo attempt. Even the fishermen have been land-bound for a few days by weather more like the typical "Christmas winds" here.

After a day in the water, there's only one place to recover: Sunshine's beach bar, where the soundtrack is inspired by its name as Bob Marley's voice mingles with the buzz of the clientele – a mix of locals and tourists.

Vast plates of fresh seafood and the bar's celebrated Killer Bee rum cocktails are served in laid-back fashion and, as the sun goes down, I finally get to enjoy the more traditional Caribbean pastime of limin' – relaxing.

I can still see those hungry "sheep" offshore and I'm happy to leave crossing the Narrows for another time. But I'm disappointed too, and I make plans to return when those woolly mammals have had their fill.

This article was written by Julia Horton from The Independent and was legally licensed through the NewsCred publisher network.