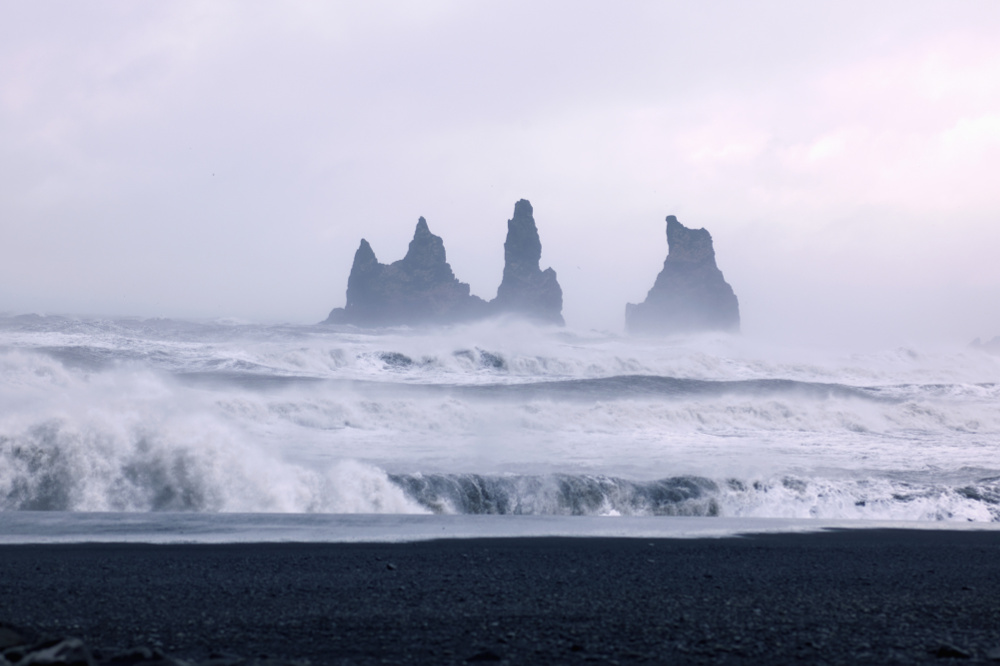 As my partner and I sat on the black sands of Reynisfjara beach, listening to our guide tell the tale of the Reynisdrangar rocks, a 20-strong Japanese photography group wandered past, taking pictures of the otherworldly basalt rock formations, the oil slick-like pewter sea (and, finally, us) with their telephoto lenses. It was 9pm, and the sun still hung high in the sky, casting a golden haze over everyone.

It was a surreal scene. The rock formations are – the story goes – trolls who waded out to sea to help a distressed ship, and were turned to stone when struck by the first rays of sunlight at dawn.

Legend has it that Iceland's Reynisdrangar rocks were once trolls. Picture: Getty Images

Legends such as these come up often in Iceland, in northern Europe. The Sagas tell tales of not only the trials and tribulations of the first settler families, but also elves, trolls, sorcery and magic.

They are bible-like in their relevance, used to explain the country’s dramatic landscapes: like Reynisdrangar, the country’s glaciers, rivers and volcanoes are woven into folklore.

It seems fitting, then, that our home for the night was in the fairytale-like Dyrholaey lighthouse. Dyrholaey, 'door-hole island', is so named because of a huge arch of cooled lava that extends into the sea underneath the house.

Placed on the edge of a promontory, it’s surrounded by natural assets: the black beach to the east, the Vestmannaeyjar islands to the west and the Myrdalsjokull glacier in the north. Resident puffins fly around at dusk. 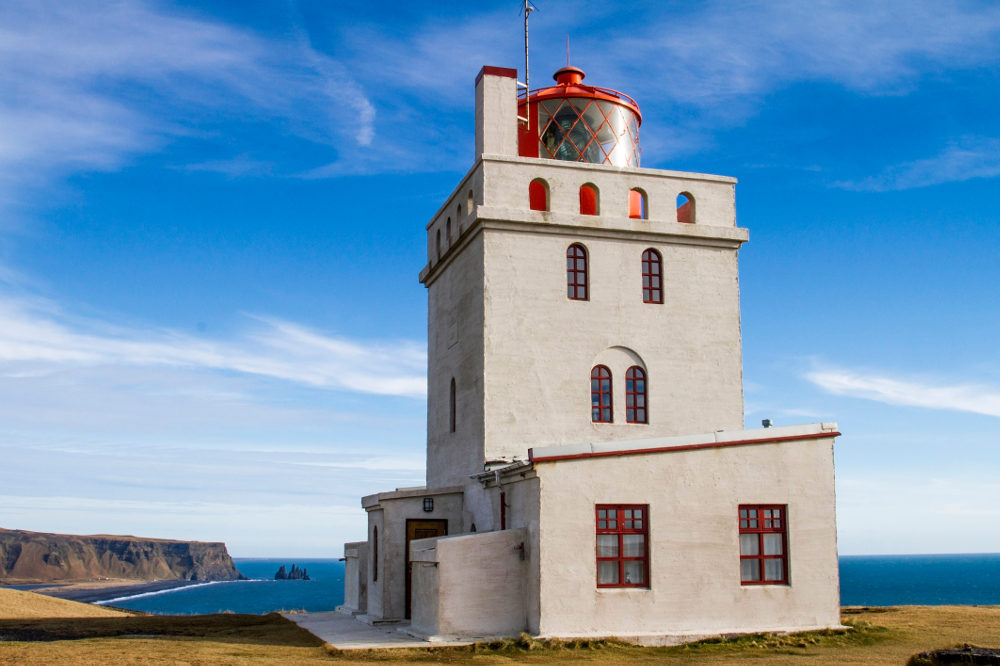 It’s the most southern point in Iceland, and for us to be spending the night here is a first. While the lighthouse is still fully functioning, it has never before been inhabited, and certainly not by tourists. For just two months this year, September and October, it is being transformed into a boutique hotel, which will be run by a hotel from the nearby town of Vik.

In Iceland to preview what forthcoming guests can expect to experience, our three-day trip began in Reykjavik, where we took flight in a helicopter despite whipping Arctic winds. Up and away we climbed, over the Lego-like houses of the low-rise capital, all primary colours lined in neat rows.

Buildings, designed to resemble natural forms, stood out: we saw the stepped frame of Hallgrimskirkja, a jagged, concrete church inspired by lava rock and dystopian in appearance, and the new Harpa concert hall, whose facade is inspired by the crystallised basalt columns found in Iceland. 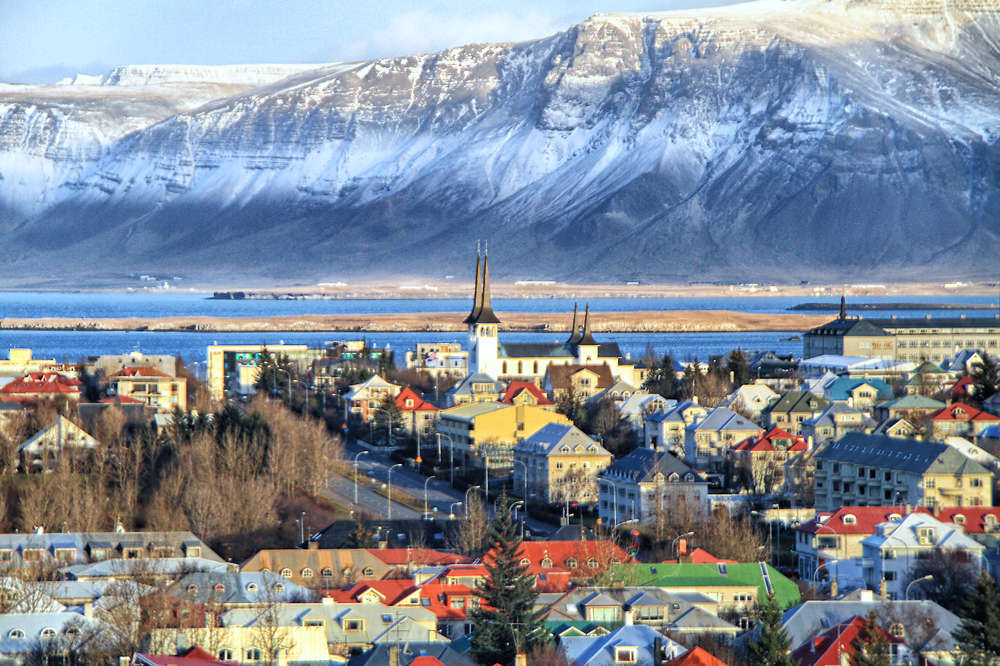 We glided north-west, away from civilisation. Rust-coloured lava fields, still dusted with snow in spring, unfurled below us; the all-white outline of Vatnajokull glacier decipherable in the distance.

I saw the Iceland of the big (and small) screen through my window, while our pilot told us of the films on which he has worked, flying cameramen around for aerial shots: Game of Thrones, Interstellar, Thor. We landed in a crater, geothermal steam enveloping our chopper, and as we stepped out on to the lunar-like land, the sulphuric smell of bubbling geysers was strong.

This was the closest we’d come to the uninhabited places in the centre of the country, and at that moment, it was hard to comprehend just how isolated we were. The day before, flying from London Gatwick, it was a scene of hyper-civilisation that stood below us.

Staggered by Iceland's natural beauty? Check out these Masterworks Of Nature

More wild landscapes on the other side of the world: From Wilderness To Wine In NZ

Our subsequent tour by land was similarly spectacular. We spent most of our time on Route 1, the sole ring road that circumnavigates the entire country – though we focused on the Golden Circle roadway, where the country’s moniker ‘land of fire and ice’ is perhaps best illustrated.

We entered Thingvellir National Park, known not only for the Althing, where parliamentary sessions were held until 1722, but also as the site of the mid-Atlantic ridge, where the North American and Eurasian tectonic plates meet. Nowhere does the sense of Iceland’s intrinsically connected history and nature become more apparent than here. 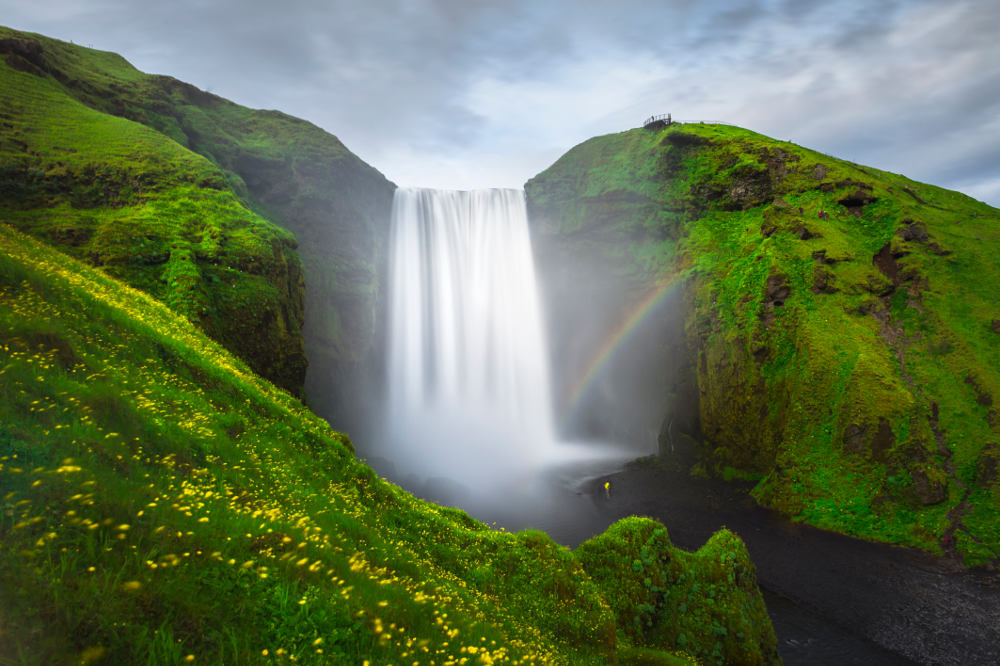 The rainbow-strewn Skogafoss, one of Iceland's many gushing waterfalls. Picture: Getty Images

From there we veer south, towards the coast, seeing modernist churches, surrounded by nothing but rolling hills; the farm that signalled the alert when the Eyjafjallajokull volcano erupted in 2010; wild horses; black swans; and gushing, gargantuan waterfalls. We gear up and climb into a cave where we’re sprayed with freshwater from Gljufrabui, see the frozen tendrils of Seljalandsfoss and tentatively climb up to the top of the rainbow-littered Skogafoss. There is even time in our tight itinerary to visit a family-run thermal spa, whose steam rooms use the vapour from geysers below, and menu offers geothermal baked bread and arctic char fished from its lake.

Back at the lighthouse, we climb up to the roof, where the all-important lantern is housed, sipping on Birker liquor while we watch the colours of the sunset dance from blue to purple, pink to orange. When the sun finally fades, we retire to our bedroom, the drum of light beating as it spins round and round, alerting ships to their – and our – location. We are like the trolls of Reynisdrangar, out at sea, trying to keep them safe.

This article was written by Jade Conroy from The Daily Telegraph and was legally licensed through the NewsCred publisher network.

Cuba: In Search of the Last Studebaker

A True Taste of Tasmania