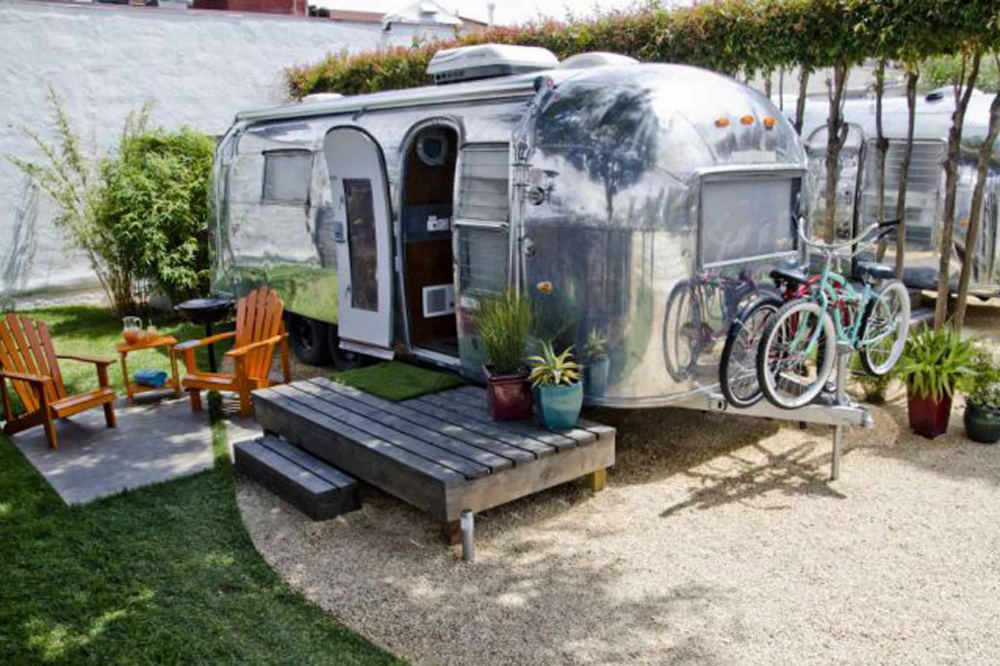 Pulling into the drive of Santa Barbara's Autocamp feels like a very 'now' experience – with five spruced-up American Airstream trailers, originally from the 1950s, '60s and '70s, standing in landscaped gardens, with their own barbecue and beach-cruiser bicycles. In reality, this site in Santa Barbara – one of California's loveliest cities, midway down the US Pacific Coast Highway road-trip route – can trace its existence back to 1915, when city councilman A.W. Dozier returned from an auto tour, reporting to have witnessed thousands of makeshift roadside rest stops for travellers along the way.

Deciding there might be a market for motorists “just passing through”, he recommended land be designated in Santa Barbara for this purpose. By 1919, the first auto camp had opened and as of 1922, Santa Barbara Auto Camp had launched, too, which today continues to operate both as a traditional RV trailer park and as home to five repurposed Airstreams, installed by Prospect Hotels in 2013 with the goal of attracting a young, fashionable crowd in search of a different overnight experience.

Each of the Airstreams has been designed by local firm Hoffmann Architecture, successfully making use of every available space. There's a compact bathroom with a loo, sink and shower, a kitchen, and two sleeping spaces that would comfortably cater for two adults and two children (four grown-ups at a push), one overhung with a flat-screen television.

The overall effect feels comfortable, cool and spacious, especially when you venture outside to your mini-garden – ours, No 3, sits beneath a fruit-bearing avocado tree – which has a hotplate-style barbecue, a parking space and two bicycles. These come in handy because the one downside of Autocamp is that it's a fair distance from downtown.

At night, you'll need to get a taxi or bring your own lights for the bikes.

While you're in the States: The Best Tickets In Las Vegas

Santa Barbara has earned itself the title 'the American Riviera' for good reason, blessed as it is with a reliable year-round climate, palm-fringed beaches and fine restaurants. The best place to start is State Street, where you can rummage through the treasures at Antiques Alley or browse the wares at trinket-laden Punch Vintage, before dropping into The Closet Trading Co, which buys and sells designer labels.

Afterwards, hit the beaches at the end of State Street, where you can try stand-up paddleboarding with What SUP Yoga or attempt yoga while you do it. Beyond the city, try wine tasting in the Santa Ynez valley – as featured in the 2004 film Sideways.

The area is best accessed along the 154 scenic road, which loops through dusty pink mountains and vine-planted fields to link with the wine-tasting towns of Los Olivos and Los Alamos. If you don't want to drive, Santa Barbara Taste does day tours, with transfers, tasting fees and lunch.

Two blocks from Autocamp, there's a branch of Trader Joe's supermarket, great for barbecue or breakfast goods. Beyond that, you'll want to hit as many of Santa Barbara's dining spots as you can.

Just along the street, there's Yellow Belly, a cool, no-frills restaurant and tap-house that serves up great burgers and craft beers on a lovely outdoor deck. At the other end of the scale, you can head up to the smart terrace bar of the Belmond El Encanto hotel at sunset for elevated views of the city and the sea.

Eat your way along State Street by stopping at Something's Fishy for Japanese sushi rolls and Uncle Rocco's for New York-style slices. Finally, don't miss the Funk Zone – a formerly run-down area of warehouses close to the railway station, that's been converted into cool restaurants and bars.

Favourites included The Lark restaurant, where reservations are essential, followed by the adjoining Les Marchands wine bar and the Figueroa Mountain Brewery Co, which often has live music.

This article was written by Laura Holt from The Independent and was legally licensed through the NewsCred publisher network.

Into The American Heart On Route 66