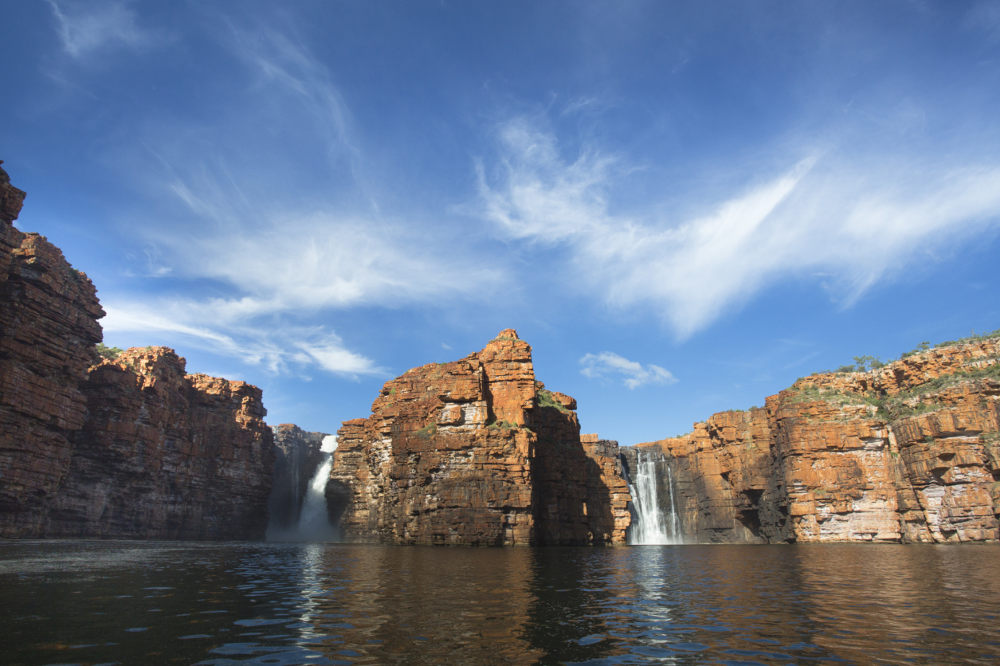 TRAVEL BLOG How To See Kimberley's Waterfalls By Air & Water

How To See Kimberley's Waterfalls By Air & Water

Some things happen so fast you don’t have time to be frightened. There we were in a helicopter, levitating above the ancient red rocks of the Kimberley in Western Australia, when without warning the ground disappeared. Seemingly in slow-motion, our chopper pin-dropped, plummeting down the stark, 80-metre face of a waterfall, chasing thousands of droplets as they splintered into a cloud of flossy, white mist. Just as my reeling brain caught up, the pilot whisked us safely back up, careering through a red curtain chasm before veering towards a giant column of rock and performing a cheeky fly-by of our gleaming cruise boat. There was a stunned silence, followed by loud whoops of relief and awe.

The extremes of nature were what this nine-day trip of a lifetime was all about. Aboard a 25-metre luxury catamaran in the remote Kimberley region, 14 of us were combing the two-billion-year-old coastline in pursuit of some of Australia’s most epic waterfalls. While most visitors to the region opt for the easy-going temperatures of a Southern Hemisphere winter, we were here, deliberately, at the tail end of the wet season: late March. Nearly 1,525 millimetres of rainfall is recorded annually, and for a few months after the tropical rains subside, water culminating in the rivers forges towards the sunburnt country’s outer crust. It was this dramatic spill – and maybe an electric storm or two – that we were chasing. On the boat, the air was heavy with humidity, and the presence of crocodiles meant relief couldn’t be found with a belly flop off the deck. But our skipper had other solutions as he navigated the 1,000 nautical miles between Broome and Wyndham. Chris Tucker has been exploring the region for about 30 years, and April is his favourite time in the Kimberley. “People see their first big waterfall and their faces light up,” he said.

We didn’t have long to wait. Soon, our aptly named vessel, The Great Escape, reached the thousand islands of the Buccaneer Archipelago, banded with a tie-dye of burnt orange, weathered beige and rhinoceros grey. That evening, after a safe swim in a freshwater creek, anchored for the night, we were served fresh snapper panko-crumbed with chilli mayo as we took in sunset’s colour wheel of pinks.

The following afternoon we witnessed a waterfall of a very different kind. Each day, Montgomery Reef is revealed by the retreat of some of the largest tropical tides in the world. As metres of water were sucked away, Australia’s largest inshore reef appeared to be rising from the ocean. When we skirted it in Zodiacs, it was little more than a dark line beneath the sea. But by the time we had buckled ourselves into a chopper for an aerial view, the mottled reef had emerged. “It’s like a reverse Atlantis,” said our pilot, Bernd Banke.

Falling for the Kimberley

With each new day another Kimberley icon loomed into view, proving – for us, the converted – why the region repeatedly tops international travel wishlists. King’s Cascade was like an Italian layer cake, spilling white water over numerous levels. The Mitchell Falls required a second helicopter ride over a verdant plateau, then a sweaty hike before a lookout revealed the frothing prize. Water tipped continuously on to four giant platforms, throwing steam-like spray into the air.

Before we reached what is regarded as the region’s highlight, the 80-metre King George Falls, we were granted a spectacular electrical storm. As the sky darkened, forked lightning clawed through the clouds. Sitting on the deck of the boat (having been evacuated from our beach bonfire dinner), we were captivated. On the penultimate morning, our vessel made its way carefully through the ochre walls framing King George river, following the serpentine sweep of what was once a great, forceful waterway. Then, as if in a postcard, the twin falls emerged. For the final time we took to the helicopter, which deposited us at the top of the falls for a wallow in its placid rock pools. “I’m blown away by this wilderness,” said Banke. “The sheer scale – it’s so untouched.” Poignant observations. Who would have thought he was about to nose dive us off a cliff? This article was written by Fleur Bainger from The Daily Telegraph and was legally licensed through the NewsCred publisher network.