The dramatic romance of Russia's history is never more apparent than in St Petersburg.

The city is rife with must-see monuments, sites of convoluted history and remnants of nobility that distinguished themselves with tenacity and extravagance. The selection of palaces and museums is overwhelming, and while many seem similar, each has an engrossing tale to tell. Here is a selection of our favourite St Petersburg palaces and museums, along with a few reasons why we think you'll love them. 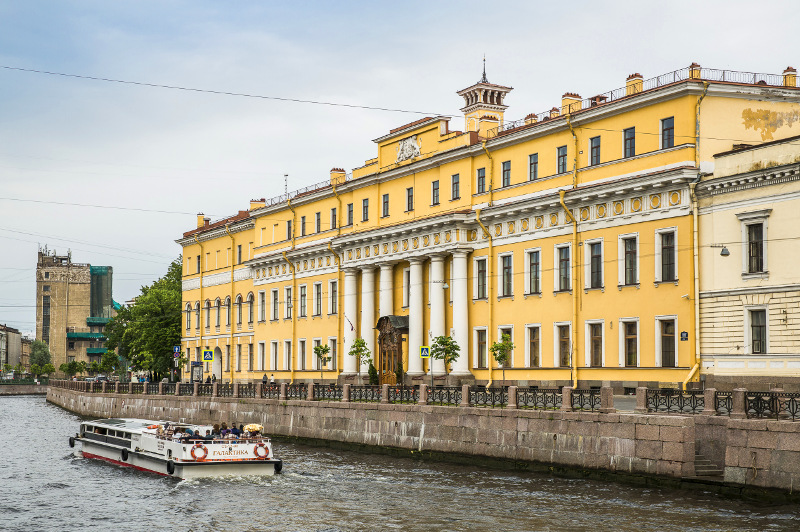 The Yusupov Palace, where Rasputin met his end, despite surviving poison and several gunshots

About: Also known as the Moika Palace, this St Petersburg mansion was once a residence of the immensely wealthy Yusupov family. Guests can explore the exhibitions and lavish interiors with the help of an audio guide or see performances in the remarkable home theatre.

Why you’ll love it: As well as boasting an incredible private theatre, this palace has the distinction of being the place where Rasputin was assassinated in 1916. The circumstances of the murder are detailed in exhibits throughout the palace, making Yusupov a must for any visitors interested in Russia’s history.

Fun fact: Royalists Felix Yusupov and Dmitry Pavlovich strategically lured Rasputin to Yusupov Palace ahead of his assassination. Felix could refuse police investigation on Yusupov property as the family was related by marriage to the Imperial Family. Rasputin was fed wine and cakes laced with cyanide, but when that failed to take effect, Yusupov shot him. 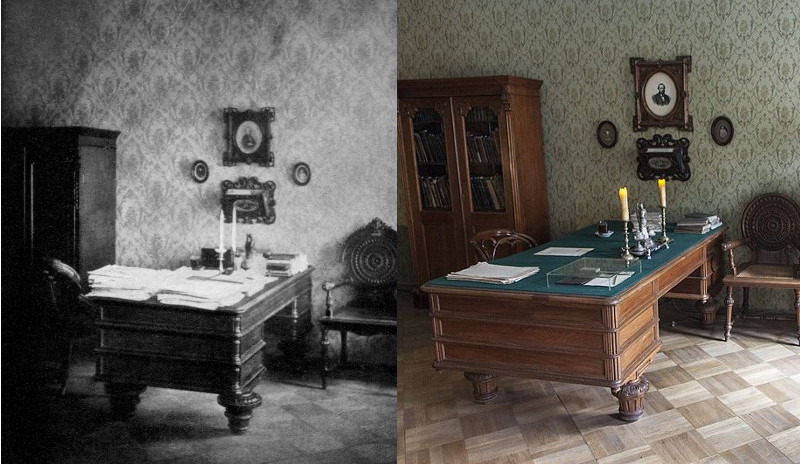 The original appearance of Dostoevsky's office and the reconstructed museum

About: As the author of such masterpieces as Crime and Punishment and The Brothers Karamazov, Dostoyevsky portrayed the working classes of Russia’s history with unique genius. The museum is the apartment where he lived for the last years of his life, reconstructed to look as it did during his residence.

Why you’ll love it: The museum was recreated using the memoirs of Dostoevsky’s wife and friends, to ensure the utmost authenticity. Sink into the past as you view the desk where the great writer penned some of his most notable works.

Fun fact: Although the apartment is furnished with reconstructed items, several of Dostoevsky’s personal effects remain, including his top hat.

About: This pink-and-white Baroque palace was the St Petersburg residence of the Stroganov nobles. Great care was taken to authentically reconstruct the interiors, ensuring the palace offers a gorgeous insight into the lives of the noble classes that defined Russia’s history.

Why you’ll love it: Spacious and uncrowded, the rooms of the Stroganov Palace are beautifully decorated in Rococo plaster designs. Don’t miss the Mirror Gallery and its simple yet effective optical illusion.

Fun fact: Legend has it that the recipe for Beef Stroganoff was invented in the Palace’s kitchen. 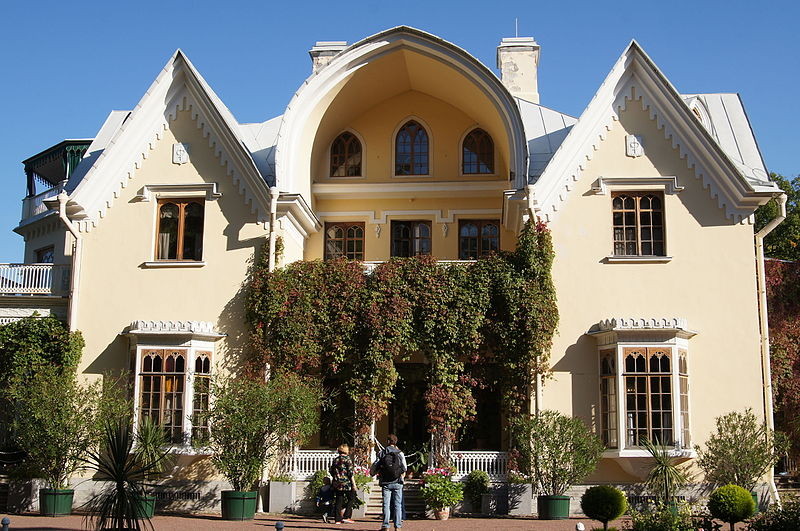 About: A comparatively casual abode, the Cottage Palace was built by Russian Emperor Nicholas I for his beloved wife Alexandra Fyodorovna. The royal pair sought to escape the oppression of the over-gilded palaces and valued this isolated family home.

Why you’ll love it: Generally passed over by the masses, the Cottage Palace offers a quiet experience and a rare insight into the humanity of Russia’s historic nobility.

Fun fact: The Cottage Palace was built in an English Gothic style, a departure from the fashion of the times. The building was fitted with the very latest in technology, including running water and ventilation. This reduced the number of required servants and preserved the couple’s highly valued privacy.

Are you a history buff? These mind-boggling museums are a sample of the excursions available on Crystal Cruises' Museum Medley, a cruise that brings you up close to the world's most monumental history. 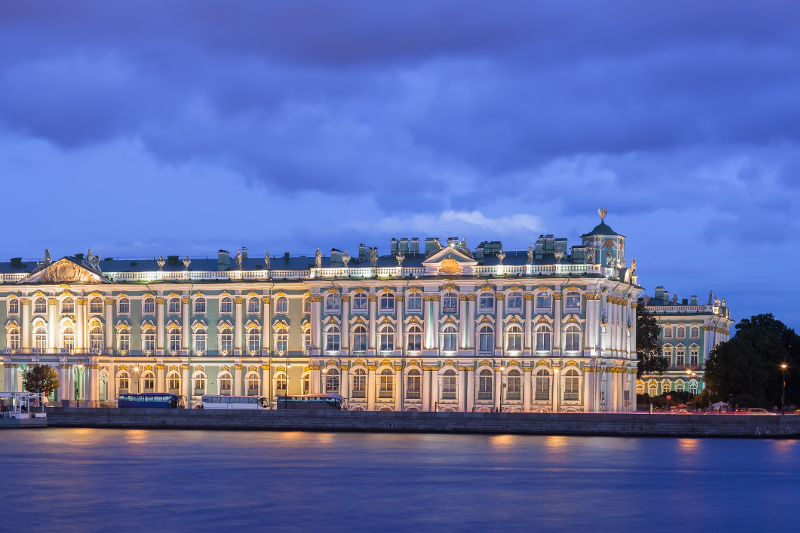 The imposing grandeur of the Hermitage Museum, St Petersburg

About: Catherine the Great and Nicholas I’s enormous hoard of art is spread over 360 rooms in the Hermitage Museum. With revered works from Rembrandt, Da Vinci, Van Gogh and Picasso representing just the tip of the iceberg, the Hermitage is the oldest and largest art museum in the world.

Why you’ll love it: As well as breathtaking pieces from the world’s masters, you’ll be dazzled by the Gold Room, a treasury of jewels that were once the pride of the Russian tsars.

Fun fact: Rumour has it that if you spent a minute looking at each painting in the museum, it would take you 11 years to view them all. 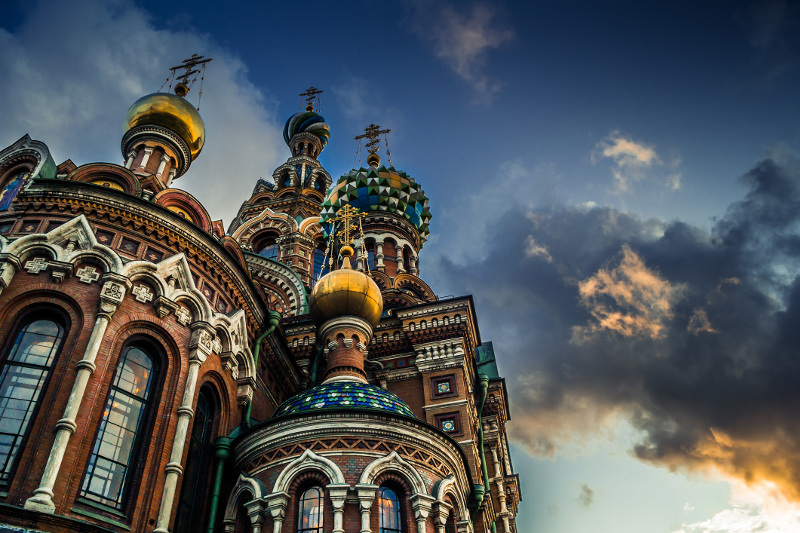 Church of the Saviour on Spilled Blood

About: One of Russia’s most iconic landmarks, this St Petersburg church greets the eyes with fabulous domes and ornate flourishes. It was erected on the exact spot where Emperor Alexander II was fatally wounded in 1881.

Why you’ll love it: The church contains over 7,500 square metres of mosaics, with the interior walls and ceilings completely covered with intricate biblical scenes and figures. Every last inch of the building is embellished, and the longer you linger, the more details you’ll fall in love with.

Fun fact: In World War II the church was used as a vegetable storehouse, earning it the nickname “Saviour on Potatoes”. 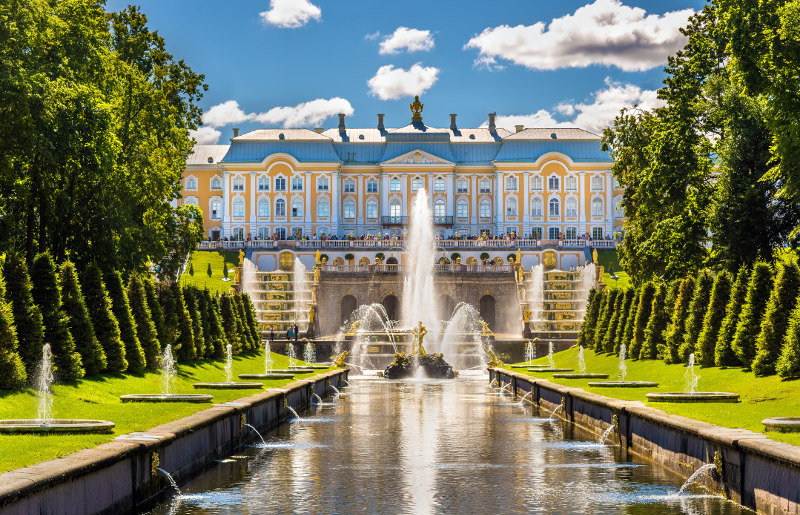 The famous fountain show of the Grand Palace, Peterhof

About: Although Peter the Great initiated the building of the Grand Palace some 35 kilometres from St Petersburg, it was transformed into a Baroque masterpiece in the 18th century during the reign of his daughter, Empress Elizabeth.

Why you’ll love it: The palace gardens are just as gorgeous as the ornate interiors, with their terraced fountains, marble sculptures and manicured walkways.

The wonders of the palace include priceless works of art, such as the large paintings detailing the Battle of Chesma. Peter the Great’s red velvet throne is on display in the massive Throne Room, and various other artefacts of the conqueror can be found throughout the palace.

Fun fact: When German artist Jacob Phillip Hackert first painted the scenes from the Battle of Chesma, he was criticised for not realistically portraying exploding ships. Catherine the Great helped him do some first-hand research by blowing up a frigate in the harbour of Livorno, Italy. 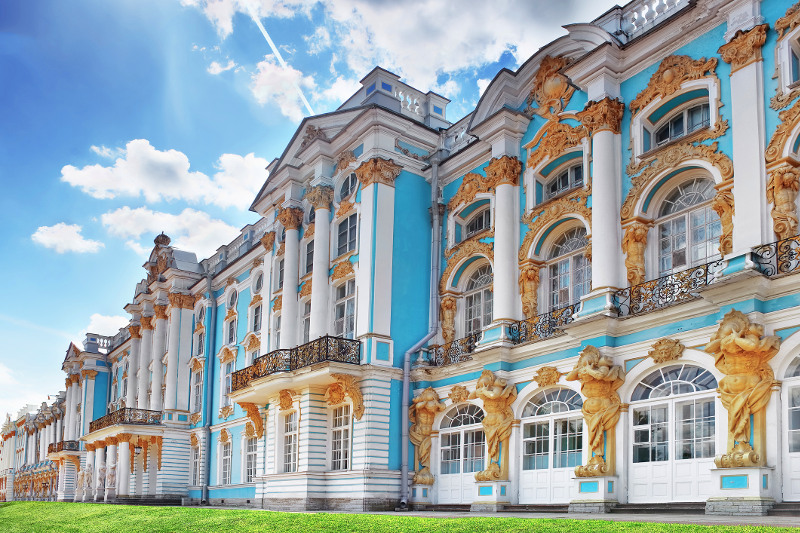 About: Commissioned by Peter the Great for his wife Catherine, this palace also owes its eventual grandeur to Empress Elizabeth. After much reconstruction at her order, this excessive palace is nearly 1 kilometre in circumference, with exteriors festooned in almost 100 kg of gold.

Why you’ll love it: The gorgeous blue, white and gold exterior of the Catherine Palace is worth a visit in itself, but the opulence of the interior is guaranteed to make your jaw drop. A series of lavishly decorated rooms known as The Golden Enfilade includes a vast, mirrored ball room, the sumptuous Green Dining Room and the Amber Room, known as the gem of Catherine Palace.

Fun fact: The Amber Room was an extravagant chamber decorated with gold-leaf amber panels that disappeared during WWII. Its current whereabouts remain a mystery, although the room has been fully reconstructed in Catherine Palace. It was once considered the Eighth Wonder of the World.

All these museums are featured on Crystal Cruises' Museum Medley tour, the ultimate itinerary for history buffs. Your local Travel Associates advisor has information on all the latest Crystal packages - get in touch to find out more!

What to Expect When Cruising The Inside Passage