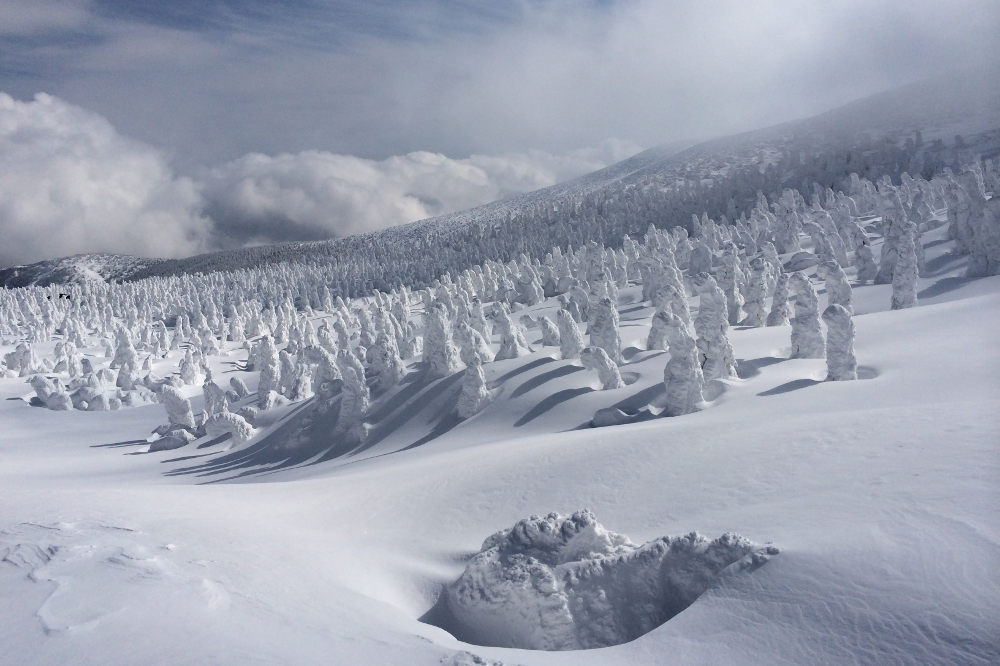 They may have been on their last legs but the snow monsters of Zao Onsen were still a fairly fearsome sight. Assuming a number of twisted, fantastical shapes, they commanded the mountaintop and, lined in ranks, looked as though they were about to march into battle.

The wind whistled through their contorted forms, bringing forth what sounded like a collective groan. Perhaps I had watched too many science fiction films, but it felt like it was time to make a Bond-like getaway.

Fortunately, I was armed with a good pair of skis and was at the top of a spectacular, nine-kilometre run back to base, and while the monsters may have looked more menacing, I was considerably faster.

The incredible creatures that appear every winter at the top of Mount Jizo in the Japanese resort of Zao Onsen are something of a legend. Formed at the point at which the seasonal winds from Siberia, heavy with moisture collected over the Sea of Japan, meet the Maries fir trees of Zao, they are extraordinary constructs in snow and ice, works of art crafted by the forces of nature.

In the peak season of January and February, when they are at their most formidable, people take delight in skiing through the field of snow monsters by day, returning at night to take in the same spectacle, illuminated, from on high in a gondola. Even in March, during the course of an action-packed week-long ski holiday in Japan with my 20-year-old son, Anton, they were still quite something to behold.

Our encounter with the monsters came towards the end of a trip in which we divided our time equally between the country’s most famous ski resort – Niseko, on the northern island of Hokkaido – and Zao Onsen, a much more traditional settlement found in the mountains of Tohoku on the main island of Honshu. We wanted to experience both – and as a bonus, travel between them by night train, a journey affording snapshots of Japanese life and spectacular vistas of the country at its winter wonderland best.

We’d begun as most British visitors do in Niseko, a resort prized for the quantity and quality of its powder snow, its popularity with an international set (in addition to fellow Britons we encountered Australians, Canadians and skiers from Hong Kong, Singapore and Malaysia), its lively nightlife and the excellence of its crab, oysters and buttery ramen soup.

Any concerns we may have had about the difficulty of skiing in Japan were soon dispelled. There are English-language maps covering all four main sectors of the Niseko ski area (Annupuri, Niseko Village, Hirafu and Hanazono), the signs on the slopes are bilingual, and there are English-speaking instructors.

Keri, a Canadian out for her second season, gave us an initial introduction to the slopes above our ski-in/ski-out Green Leaf hotel in Niseko Village. The snow was fresh underfoot, yet there was an almost silky softness to it.

We began on the easiest green and red runs (green replaces blue in Japan), familiarising ourselves with the slightly different sensation and techniques involved in skiing on fine powder. Emboldened, we began to make mini detours, branching off to work our way between the clusters of trees to the side of the piste.

Visibility on that first day wasn’t great but the circular tower of the Niseko Hilton proved a useful landmark and rediscovering our ski legs in such an exotic location was undoubtedly exhilarating. Visibility on our second day was much better; indeed, it was one of those days that all skiers dream of.

A land full of surprises: Japan Amazes Me Every Day

We started early, heading for the clutch of runs above Hirafu, the largest of Niseko’s ski sectors. Progress was slow – not because of poor conditions but because we kept stopping to marvel at the sensational views across the valley of Mount Yotei, Hokkaido’s answer to Mount Fuji.

Bathed in brilliant sunlight and framed against a pristine blue sky, the snow-capped peak of the perfectly formed Mount Yotei defined and punctuated our day, its snowy summit and pyramid-like shape informing our every turn. We saw it when the sun was high in the sky; we saw it when it was low; we saw it again later, caught in the luminosity of a full moon.

Niseko may not offer the range of peaks you see in the Alps, but Yotei has a very special, very Japanese quality all of its own. There was another stirring sight to be had that day when we trudged up to the viewing area at the top of Mount Niseko-Annupuri and, in the distance, caught a glimpse of the shimmering Sea of Japan.

From there, the only way was down: a challenging but rewarding descent through a stretch of thick virgin powder (we were feeling more confident) before hitting the pistes again and tackling a couple of black runs (Dynamic and Legend of Shinya) and a host of reds (including the Stairway to Heaven). We did the runs over and over, exploring the farthest reaches of the ski area and coming back repeatedly for more.

Reluctant for the day to end, when nightfall arrived we carried on under floodlights. After all that, there was much to celebrate and, fortunately, Hirafu village caters well for those seeking apres diversions.

We began in the Ice Bar, which, although beginning to melt, was extremely … cool. Or at least that’s how it felt after a couple of Sapporo beers chased down by a concoction involving butterscotch flavouring, Baileys and vodka, on top of lively conversation with the bar’s endearingly eccentric Japanese proprietors.

More beers followed in Bang Bang, a stylish (but nicely informal) restaurant in which we decided to temper the alcohol with some of the seafood specialities for which Hokkaido is famed (the oysters were excellent). Nightcaps (Suntory whisky, of course) came at the Edge, an establishment that was so out there it didn’t even have a sign on the door.

Father and son matched each other drink for drink, laugh for laugh: an evening to be logged in the great memory bank of shared experiences to treasure. As indeed was the next one.

A cloudy, snow and rain-filled morning had yielded only a fraction of the fun we’d had in the bright sun of the day before, and by early afternoon we were preparing for what turned into an epic (but epically rewarding) train and bus journey back to the main island of Honshu and down into the mountains of Tohoku to Zao Onsen – a resort famed for the hot springs (onsen) that bubble forth in streams and pools on every street corner.

If you didn’t hear or see them, you would certainly smell the sulphur-rich hot springs of Zao Onsen, which ever since their discovery almost 2,000 years ago have been providing visitors with the opportunity to relax, bathe and soothe weary muscles whatever the time of year. Within seconds of arriving, we realised that Zao offered a very different experience to that of the more cosmopolitan, Westernised Niseko.

Here, instead of bold blocks fashioned out of concrete, most of the buildings are made of wood and many are adorned with lanterns, lending the town a charm that evokes the old-world spirit of the geisha district of Gion in Kyoto. The vibe is more 1520 than 2015 (OK, I exaggerate – but not much).

English, too, is far less widely spoken – it was quite touching to be shown around the 18th Century Miyamaso Takamiya ryokan (the old-style inn where we stayed) by a traditionally attired young woman who read rather nervously from English-language notes. Not that much was lost in translation.

We smiled, we bowed and we retreated with pleasure into our spacious, minimalist room complete with welcoming futons (even they seem comfortable after you’ve been travelling by train all night), ancient Japanese puzzles and an additional outer room offering a serene outlook on to the hills and bubbling streams of the town.

Bliss. So, too, were the Miyamaso Takamiya’s assortment of hot spring baths and the exquisitely presented meals involving colourful and exotic combinations of plants, fish and pickled vegetables, and steaming shabu-shabu pots of boiling broth into which we would place delicate slivers of beef.

We donned our traditional yukata robes, drank lots of green tea and marvelled at a beauty beyond the walls of the ryokan that was complemented perfectly by one within. Then, finally, we remembered that we had come here to ski – and that we had an appointment with some famous snow monsters.

We clipped on our boots for one last time and set off for Mount Jizo. These creatures would have to be seen to be believed.