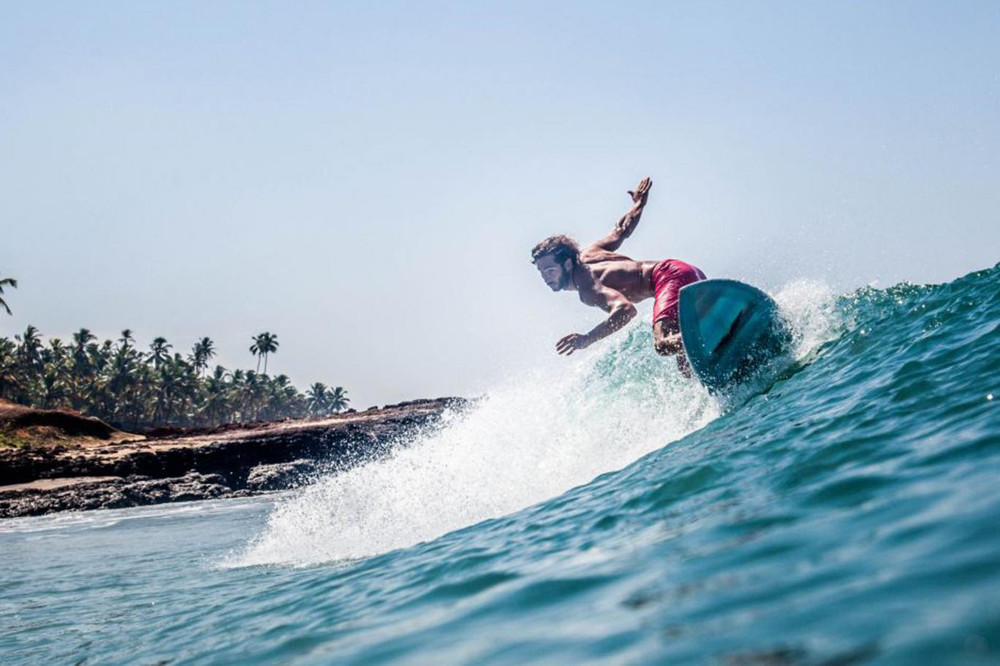 "This is the closest I’m likely to come to being in a Wes Anderson movie," my new friend Ben says as we unload foam surfboards from the roof of an Ambassador car, the visual choreography of the brightly coloured boards against the coconut tree-framed horizon adding to the film-set feel. The sun is rising over Varkala in the laidback state of Kerala in south-western India, the bright red globe looking more like dusk than dawn.

Fuelled with bananas and chai,we carry our boards down to the water’s edge for a morning surf. We are not the only early risers – this is activity hour, when the sand is still cool enough for walking barefoot to be a pleasure.

At the farthest end of the beach, a few Hindu worshippers perform morning puja, offering blessed rice wrapped in banana leaves to the sea. A class of primary schoolchildren in smart burgundy uniforms files in a crocodile across the beach and up the cliff steps, a few pausing to stare at our boards.

Small groups of tourists practise yoga; lone crossed-legged figures meditate; two dogs come to guard our bags. Aside from the occasional swimmer, we’re the only ones in the water.

I’ve tried surfing a few times but sadly I’m still very much a beginner – and it shows as I’m pulled and pushed by the relatively tame waves. Rakhul Shyamraj, 23, is one of the first wave of Indians to become an internationally qualified surf instructor.

He moved from the hills near Munnar to work at Soul & Surf’s cafe, graduating to the organisation’s surf school as his love of the sport grew. He currently assists the small team of mainly British, universally patient, teachers.

I’ve rarely met someone so passionate about their job. “Big wave coming. Wave for sale,” he shouts to our group.

I jump on to my board, belly down, and he gives me a push. I giggle as the wave swoops me along, reminding me of the feeling of sledging down hills as a child, out of control.

Almost immediately, I fall off. The Arabian Sea catches me, swirling me around and down before flinging me back to the surface.

I clamber back on. Rinse and repeat.

Make like a maharajah: 18 Royal Palaces You Can Actually Visit

A couple of hours later, exhausted and invigorated, guests and staff crowd around communal tables in the clifftop garden to eat breakfast and chat about the waves. Soul & Surf was founded in 2009 by Ed and Sofie Templeton, who quit their jobs in graphic design and fashion in Brighton, set off on a round-the-world trip, and found themselves lingering in Varkala.

They were some of the very first surfers in Kerala and still explore the coastline to find new, as yet unclaimed, waves. “It was weird to find ourselves at the forefront of Indian surfing,” Ed says. “We’re not ex-pros, we just stumbled on it and did it.”

With the sport in its infancy in India – an estimated 700 people now surf countrywide – Soul & Surf offers free lessons to local teenagers on Sundays, many of whose parents can’t swim. When they first opened, they had four rooms and no experience, but offered a warm welcome.

Ed and Sofie have now expanded to a 15-room Keralan villa – split into “quite nice rooms”, “nice rooms” and “really nice rooms”, all with en-suite bathrooms, most with a balcony – but have managed to keep the same staying-at-a-friend’s-home vibe. A little welcome pack to my sunny room includes locally produced soap and a hip flask – for a discreet tipple in the officially dry state of Kerala.

But the real comfort is the sociable atmosphere. Guests and staff hang out in the breezy, beautiful garden, the sound of the sea a constant backdrop.

Brahmani kites and occasional paragliders float by lazily on thermals, while steep steps at the end of the garden lead straight to the beach.

I wander to a temple five minutes from Soul & Surf, with a giant banyan tree in its grounds and ghats below for bathers.

Then on to North Cliff, the main tourist area, a 15-minute walk away. Here, hawkers sell hippie clothes and Ayurvedic doctors offer massages among the juice bars, seafood restaurants, and bakeries.

Bars subtly serve beer and cocktails. In high season, North Cliff can feel like walking through soup, as hundreds of people meander along the narrow pathway.

But when the crowds thin out, it has charm. Three kilometres by auto-rickshaw, Varkala town has canteens serving delicious dosas, and my favourite restaurant – Dwarka – has the best thali, served on banana leaf, and paneer butter masala I’ve tasted.

At sunset, we practise yoga on Soul & Surf’s rooftop, in classes tailored for surfers by Lucy Foster-Perkins, who runs Yoga for City Surfers in London and Bristol. Friendships are cemented over barbecues and curries.

“There’s a community feel to Soul & Surf, and while we provide a good service, we hope to bridge the gap between staff and guests. The people make it so special,” Sofie says.

They are currently setting up a new Soul & Surf, which will open in Sri Lanka in November, as well as running pop-ups in the Andaman Islands and Banda Aceh in Indonesia.

After three days, I notice I’ve become part of a different world where I struggle to remember the day of the week and my main aim has become to ride a green wave. Over breakfast one morning, a guest who’s just arrived admits to a fear of the sea.

“I won’t go in further than my ankles,” she tells me. The next day, after some coaxing from instructors, she is standing up on her surfboard, riding white water, any thoughts of keeping her knees dry long forgotten.

My progress is slower. My pop-up is a clamber, and I can’t quite shake the suspicion that my board will attack when I’m churned underwater.

But the feeling of riding a wave – however rare – is unbeatable, and however many times I’m thrown off it’s impossible not to smile in the sea.

Even Wes would struggle to create a better set for a restorative break.

This article was written by Genevieve Roberts from The Independent and was legally licensed through the NewsCred publisher network.