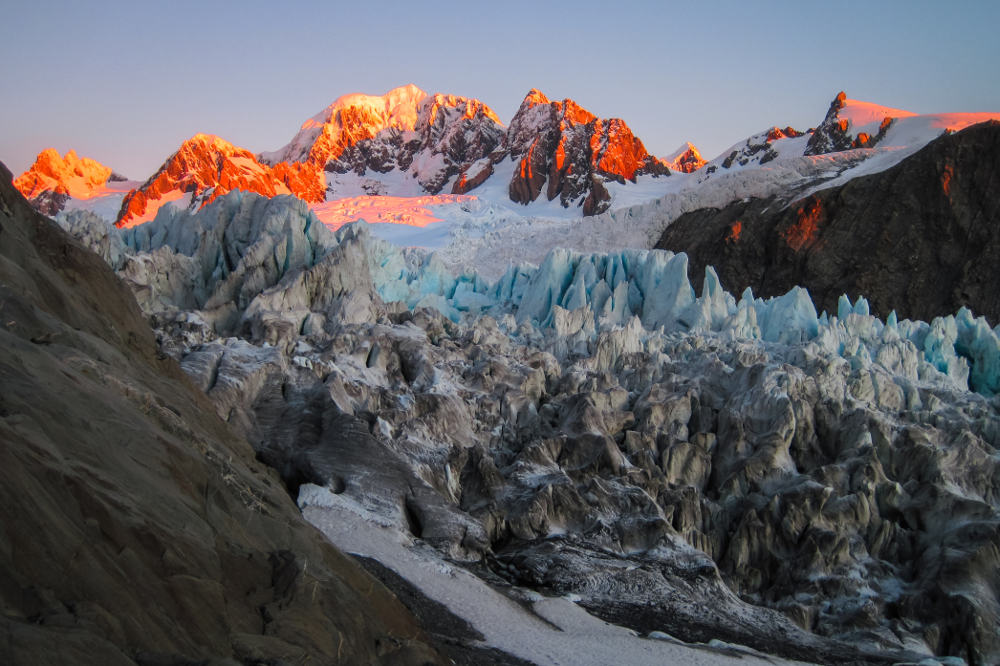 12 Days In New Zealand And No Second To Spare

"So, what do you think of Brokenville?" asks Jim the taxi driver as we slink through the streets of post-earthquake Christchurch in the early morning light. I draw breath but Jim doesn't wait for my answer. "They're going to put planters on the side of the streets to make it look prettier," he scoffs. "I just want them to mend the roads."

I ask where he was when the 6.3-Richter quake tore up this city on the east coast of New Zealand's South Island in 2011, killing 185 people and restyling this quiet centre of agribusiness as a war zone. Three years on, not much has changed.

"I was driving. Straddling a hole in the ground," he remembers. "There were lumps of clay the size of steering wheels bouncing down the road towards me. People in the street had their mouths wide open – their faces were as white as this car."

Jim sees the world through the prism of the motor vehicle.

Transport is a theme of my trip to New Zealand; with just 12 days on the ground, how I get about has been as important as where I'll stay and what I'll do along the way. My transport choices not only need to join the necessary dots but fill in some of the colour of this country, too.

I'd already made the 80-minute flight from Auckland to Christchurch. With just a few hours to spare in the city, I checked into the Heritage Hotel, one of the few businesses operating in the worst-hit Red Zone, where the cordon was lifted only a year ago.

From here, I could step straight out into the city's spilt guts in search of signs of life. I found Re:START, a shopping precinct set in brightly coloured shipping containers, pulsating with people.

And I found motion, too, outside the pulverised cathedral. There, observed by a congregation of pigeons perched where the spire once stood, passers-by were pausing to inspect a new metal entrance arch garlanded in shrubs, one of Cathedral Square's optimistic art installations softening cold steel with abundant nature.

There were more vital signs to detect but my time was quickly up. Now I am heading in Jim's taxi to the railway station to catch the 8.15am for a four-and-a-half-hour ride through the Southern Alps to Greymouth.

Get those boots on: Hiking The Great Walks On NZ's South Island

Trek on over to Oz: 5 Top Multi-Day Hiking Trails Across Australia

The TranzAlpine Express is on the bucket list of every rail enthusiast. This iron road has connected East to West since the early 20th Century. Its tourism potential wasn't recognised until 1987 and the latest swish carriages, with fat reclining seats and panoramic windows, were added just two years ago.

On the unrelenting flatlands of the Canterbury Plain, the monotony of bungalows, industrial estates and tractor showrooms is only broken by the sight of a horse with a fifth leg of pee. But soon we climb into the mountains, and the earth begins to buckle into gentle grassy folds, then fir-covered humps, rising to bald peaks where no tree will grow.

I put on the headphones provided and listen to the commentary that picks out points of interest, revealing the hard life of the navvies who built this railway between the 1890s and 1920s. I head to the open carriage at the rear of the train as the land drops away to reveal the braided glacial waters of the Waimakariri River, racing us across the grey shingle below.

Beneath our feet, the tracks perform engineering gymnastics to carry us over ravines, spiralling to the Staircase Viaduct, where we teeter across an iron tightrope 73 metres above the gully floor to enter tussock territory, where stockmen still muster Merino sheep.

At the lonesome town of Arthur's Pass, the highest point, the train takes a breather before we plunge into the darkness of the Otira Tunnel for several kilometres, emerging in the old coalfields of Brunner and Dobson and descending to the shores of the Tasman Sea.

The rails run out at Greymouth. So I hire a car for the three-hour drive south-west into the rainforest, bound for Glacier Country. Along the way, I pass through quiet townships such as Hokitika, which in the 19th Century hosted wine, women and song for gold miners. At that time this was home to 50,000 souls; now just 30,000 people live across the whole west coast.

The following morning I join a small group for a trek to the Fox Glacier. Our guide, Duncan, leads us across a kilometre or so of boulder-strewn moraine to the ethereal mass of millennia-old ice that appears to spill out of the lap of the mountain yet is, in fact, retreating into the range.

In the distance, I can see one of Duncan's colleagues wheeling a pick-axe into the glacier. "He's creating some steps," explains Duncan. Close up, I find a neatly carved staircase, which I totter up on half crampons to survey this frozen blue sea.

Fox Glacier is barely 10 minutes' drive from Lake Matheson, so I grab the chance to see its still waters hold up a mirror to New Zealand's highest mountain, Mount Cook – Aoraki to the Maori. But great lumps of grey cloud have drawn a curtain of rain across the scene.

So I cut my losses and return to Hokitika, where the next morning I catch a flight back to the east coast – after breakfasting on home-made apple cake in an airport cafe resembling a bountiful WI stall.

My plane bounces across the roof of the Southern Alps in just 30 minutes. I pick up a car and drive north-east to Kaikoura, a former whaling town that now prospers from watching rather than killing wildlife. I'd hoped to skirt the ocean on the Coastal Pacific, which runs from Christchurch to Picton, but my visit coincides with its closed season – since the earthquake, the train runs only from September to May.

I have another plane to catch, this time a light aircraft. At Wings Over Whales, on the edge of Kaikoura, pilot Pete explains that just off the beach is a canyon full of grumpy sperm whales. "They spend their teenage years here before returning home to Fiji to mate," he says.

Up we go in search of these 20-metre-long residents of the Hikurangi Trench, our six-seater plane zipping about the bay. Then Pete's eyes spot a sperm whale that's about to dive. "Over there. At 11 o'clock," he shouts and twizzles the aircraft on its nose high above the great marine beast, so we might watch it take a last gasp of air before disappearing in a pool of phosphorescence.

I'm not done with South Island yet. The following day, I hop on one of the bicycles hired out by Wine Tours by Bike in Renwick, at the heart of the Marlborough vineyards, for a two-wheeled spin around the cellar doors.

At Forrest I try a fine sauvignon blanc, at Framingham it's all about the reislings. At Giesen, I figure one of the charcuterie boards would be a wise way to soak up the chardonnay. And after three shots of sparkling wine at No1, my woozy legs call time.

The only way is north now. The sun is high and the water calm as the Interislander Ferry weaves through the drowning valleys of the Marlborough Sound and crosses the Cook Strait to Wellington. I barely have time to get my bearings in New Zealand's capital before the railway beckons again.

The Northern Explorer takes me on another epic train journey, from seashore to mountainside, peeping in the gardens of suburban clapboard homes and crossing wide pastures. We helter-skelter down the steep slope from the volcanic plateau on the Raurimu Spiral and scale formerly impenetrable bush on the high steel girders of the Makatote Viaduct.

Headphones on again, I listen to the story of this train line. But it is the tales of the tribal lands we're crossing that captivate me. I find it hard not to mimic quietly the narrator's rhythmic phonetic delivery of the lovely multi-syllabic Maori words – Paraparaumu, Rangitikei, Makohine, Mataroa, Turangarere.

The Northern Explorer connects Wellington to Auckland in about 11 hours, but I break my journey in Tongariro National Park, where the Chateau Tongariro Hotel has provided classy Georgian-style lodgings in the wilderness since 1929.

The grandeur may have faded but it's still the place from which to stride out on the Tongariro Crossing, a day's hike around the volcanic peaks of Ngauruhoe, Ruapehu and, of course, Tongariro.

But the weather closes in and my trek is called off. Like the Hobbiton movie set, Fiordland National Park, and the bungee-jump capital Queenstown, it will have to wait until the next time I have 12 days to spare on the other side of the world.

This article was written by Kate Simon from The Independent and was legally licensed through the NewsCred publisher network.