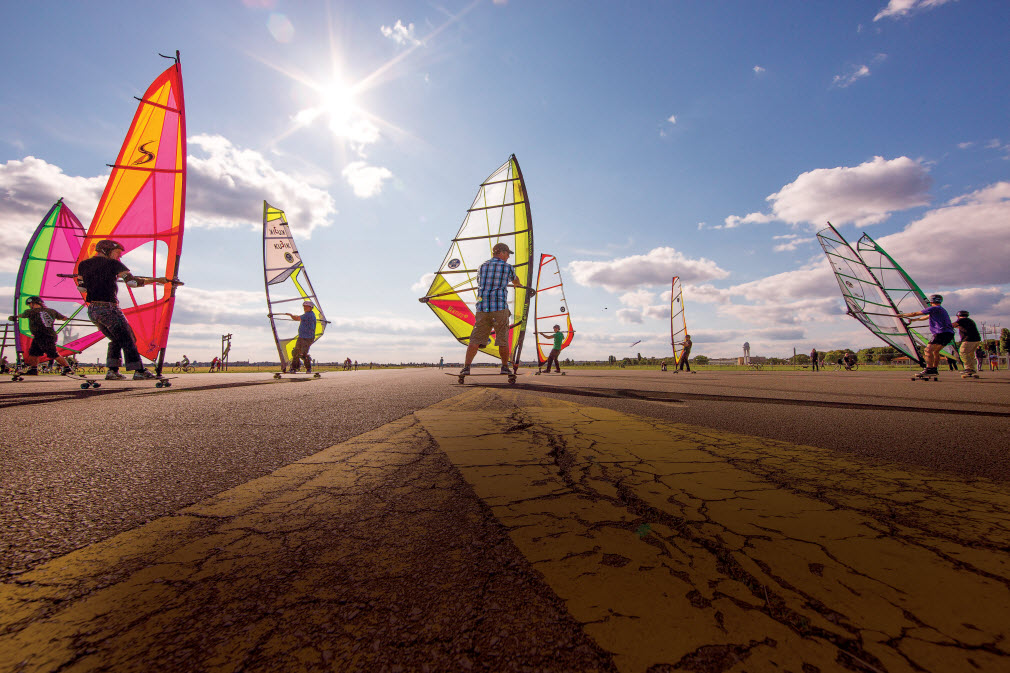 TRAVEL BLOG Once Were Airports: How 4 Former Airports Have Been Re-purposed

Once Were Airports: How 4 Former Airports Have Been Re-purposed

Not all airports are bustling hives of activity with ever-changing destinations flicking over on departure boards, planes taking off and landing, and people in a constant state of flux. Some air spaces are monuments to aviation history. Some are abandoned; eerily quiet empty shells as a physical reminder of budget blowouts or escalating conflicts. And others have been re-imagined as urban playgrounds and commercial spaces.

Here are some of the world's former airports with a new lease of life.

1. Berlin-Tempelhof Airport
Located in the middle of Berlin in a residential area, there was nowhere for Tempelhof airport to expand to meet the city’s growing transport needs. Established in 1923, Berlin-Tempelhof closed to airline passengers in 2008 when Flughafen Berlin-Schönefeld, a former East German site in southeast Berlin, was upgraded to become the city’s major international airline hub. Tempelhof became Tempelhofer Freiheit (Freedom)– a 386-hectare site that pays homage to the airport as a symbol of freedom and liberation after World War II, and an evolving space for locals to be – whether that means tending a vegetable garden, flying kites, having a barbecue, inline skating, dog walking or enjoying a drink in the Luftgarten beer garden.

2. Kai Tak International Airport
Boasting a reputation for one of the most nail-biting landing and take-off locations in the world, Hong Kong’s Kai Tak International Airport really tested the skill of pilots with its only runway, built on reclaimed land, surrounded by skyscrapers and mountains and jutting out into Victoria Harbour in Kowloon Bay. Serving as the city’s international airport from 1925 to 1998, Kai Tak was superseded by Hong Kong International Airport in July 1998, which is located on Chep Lap Kok island. After 15 years of inactivity, Kai Tak now welcomes passengers again as a cruise terminal. The Kai Tak Cruise Terminal opened on the site of the former airport’s notorious runway 13, and was designed by the same architects who built City Hall and the Millennium Bridge in London.

3. Croydon Airport
Home of the world’s first international terminal, Croydon Airport in Surrey, south of London, is an important entry in the aviation history books. Operating from 1928 until 1959, the airport saw a number of early aviation pioneers make their groundbreaking journeys from here, including the first solo trans-Atlantic flight in 1927 by Charles Lindbergh and Amy Johnson’s solo flight to Darwin in 1930. Today, the majority of the site has been repurposed, however visitors can still access some of the original terminal buildings with the Airport House museum and a control tower, now a visitors centre. The elegant neoclassical facade of the museum harks back to the glamorous early days of aviation and the entrance is marked by a de Havilland Heron aircraft.

4. Floyd Bennett Field
Named for naval aviator Floyd Bennett, who was the first person to fly over the North Pole, Floyd Bennett Field in Brooklyn’s Jamaica Bay neighbourhood was New York City’s first municipal airport. Officially opened in 1931, the site converted to a Naval Air Station in 1941 and was the most active airport in the United States during World War II. During its years in use, the airport hosted the likes of Amelia Earhart and Howard Hughes, who made their record-breaking flights from here. Now part of Gateway National Recreation Area, Floyd Bennett Field is popular with aviation history buffs, nature lovers and sporting enthusiasts. Here, you have the opportunity to go on ecology walks, try urban camping in NYC and enjoy recreational activities like horse riding, golf and rock climbing.