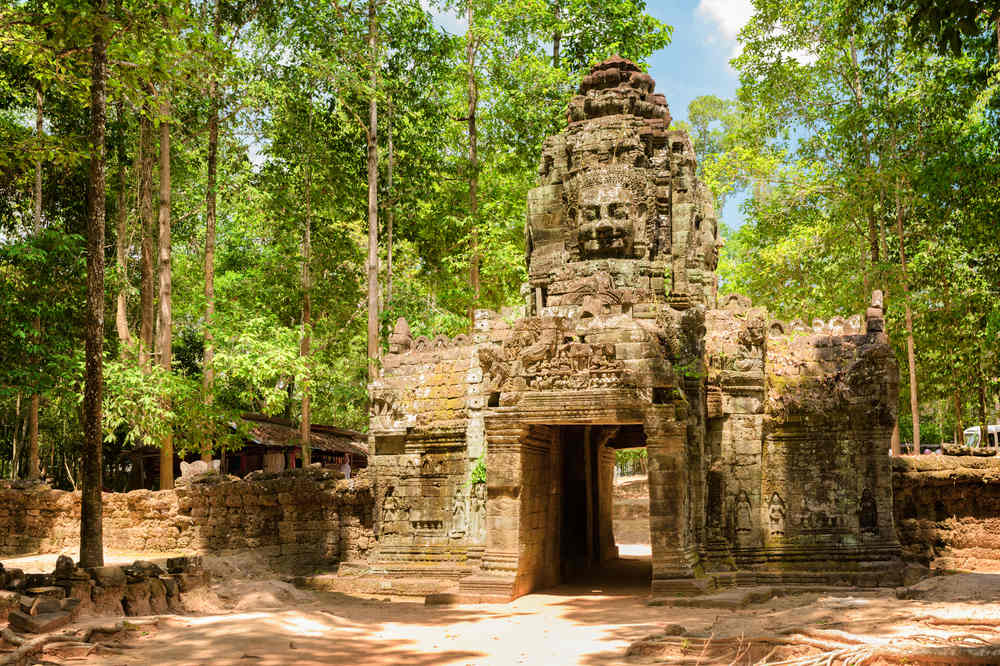 TRAVEL BLOG Angkor Wat, Cambodia: How To Beat The Crowds

Angkor Wat, Cambodia: How To Beat The Crowds

The first time it happened was a surprise. Like hundreds of thousands of other tourists that year I was visiting Angkor, the Khmer temple complex in Cambodia that is one of the biggest draws in South-East Asia. But my excitement was tempered with concern that too many people had been here before me.

Flanking the road from the airport the day before were very different temples, vast bland hotels, seemingly dozens of them, built to cater for the hordes, particularly the burgeoning Chinese market. And on that first morning, as we drove the five kilometres from the town of Siem Reap to the vast main complex, the tourist-filled buses and the tuk-tuks were out in force. Mmm, I thought to myself, paradoxically both smug and disappointed, my fears that I was too late for Angkor were to be proven right.

Yet even at my very first temple, Ta Som, a small affair chosen by our guide because it wasn’t in the top rank of Angkor must-sees, I found myself suddenly alone. It was just me, walls of intricately carved stone, and the jungle, almost audibly encroaching, a strangler fig oozing its way over one of the main entrances. As I was quickly learning, one of the most remarkable things about 21st Century Angkor – almost as remarkable as its vertiginous beauty, which retains the power to render you speechless a full 12 centuries after building first began – is that with just a little cunning you can enjoy it almost as you might have done two decades ago, when it was just being opened up after the terrible civil war.

Of course, Angkor Wat itself, with its vast friezes of soldiers and devils and dancing girls, is always full of hordes. But with clever timetabling – namely those couple of hours when most people stop for lunch, and the very beginning and very end of the day (the complex opens at 5am and shuts at 6pm) – the other main sights can be shared with comparatively few. Take the glorious Bayon, which sits at the heart of the ancient city of Angkor Thom, built by and for King Jayavarman VII, famed for its 37 stone faces. At lunchtime, up on the roof, the only other 'people' to be seen were those faces on the towers, and what serenely beautiful companions they were.

My other fear, that Angkor would have been restored out of its wilderness state into something generic and safe, also proved unfounded. In many of the temples the jungle is in only temporary abeyance, in part because there are just so many buildings here that reconstruction is an impossible task, but also because to attempt to remove the encroaching vegetation would be to risk damage to the structures. This means that even a temple such as Preah Khan, another of the most celebrated, with its daisy chain of interconnected rooms and impressive causeway flanked by giant nagas, or snake-gods, still seems wild.

Another ancient lost city: Treasures Of The Cambodian Jungle

And then there is the otherness of the art and architecture itself – first created in the name of Hinduism and appropriated a century later by Buddhism – which depicts a wonderland of all things imaginable and unimaginable. As you visit more and more temples you start to recognise the language of kings, warriors and apsaras, or celestial nymphs, upon whom, if the numbers alone are anything to go by, the craftsmen seemed to lavish a remarkable amount of care and attention. Whatever the number of visitors, it seems Angkor remains untameable.

Even so, the intrepid can get off the beaten track to a temple called Banteay Chhmar, 100 kilometres north of the main Angkor complex, the most remote of the 74 accessible sites. By car it takes more than three hours, by helicopter a mere 40 minutes. If you plan to stay overnight, the only accommodation option is to stay in one of the six local houses that are signed up to the Banteay Chhmar homestay project.

This temple was 'discovered' in the 1950s – the French came across Angkor Wat a century earlier – and restoration work began in 2008. To the untrained eye much of the temple is little more than giant piles of stone, but there is enough of the original structure to make a trip worthwhile, particularly the friezes, which depict two octopus-armed bodhisattvas, or enlightened beings.

At least as compelling, though, is the chance to compare life as recorded by the artists with that which unfolds in rural Cambodia today. Here on the frieze are farmer-warriors heading off to battle with their kup-kups (small scythes); in the nearby fields you can see the local farmers using their kup-kups to cut grass. And the buffalo carts that are shown in many friezes are still being used on the local roads.

Back in Siem Reap, the town seemed the height of urban sophistication. And indeed it sort of was. Because here, once again, my preconceptions had been misleading.

Away from the hangar-style hotels near the airport, Siem Reap is a low-key yet lovely place, full of pretty colonial buildings, charming cafes and restaurants, and tempting and surprisingly chic shops. The clever traveller spends the busiest temple-going hours of mid-morning and mid-afternoon people-watching (or, perhaps more realistically after that hideously early 5am start, dozing) in the cafes here, then pops back for more Indiana Jones-esque delights. It’s an unbeatable double act.

Peak season is November to March, which means cool, dry days and lots and lots of people. June to October is quieter but also hot and potentially wet. Avoid April at all costs: it is boiling.

One of the chicest places in town – and the competition is fierce. Beautiful architecture and a swimming pool that is perfect for post-temple cool-downs.

A hip feel for very little money, this tiny seven-room establishment does boutique on a budget like no one else in town.

This pretty place was once the Foreign Correspondents’ Club and remains the favoured hang-out of the chattering classes. The rooms are airy, stylish and good value, plus there is a lovely spa and a see-and-be-seen restaurant.

Where To Eat & Drink

The food may be unexceptionally international in style but the atmosphere in this high-ceilinged terraced eyrie overlooking the river is hard to beat. Great day or night.

For a top-notch modern take on traditional Khmer cuisine – a less spicy version of Thai – this is the best place in town.

When you are hit with temple fatigue – and it sneaks up on even the most dedicated sightseer in the end – this colonial-era favourite next to the old market is the best spot for an afternoon of people-watching. The coffees and cocktails are top-notch.

Stylish and intimate, this tiny cocktail bar down a narrow alleyway makes you feel like you are in Shanghai in the 1930s. Head for the charmingly named Pub Street in the centre of town, and ask for directions from there.

This depends on how much time you have. There is much to see but temple overload can be difficult to recover from. The four 'must-sees' are Angkor Wat, the Bayon, Preah Khan and Ta Prohm. But you are likely to gain equal – if not more – pleasure from visiting some of the smaller temples, such as Neak Pean and Ta Som.