TRAVEL BLOG Beyond the Pyramids: Travel to the Temples of Egypt

Beyond the Pyramids: Travel to the Temples of Egypt

When you think of Egypt, it’s hard not to think of the pyramids.

These structures are the most iconic remnant of the Ancient Egyptians, a race who have intrigued the world for centuries. Despite their fixation on the afterlife, the Egyptians left a legacy that extends far beyond their tombs.

You’ll be captivated by the fantastic tales and astounding beauty of Egypt’s temples. Add these stops to your Egypt travel checklist and delve into the realm of the ancient gods. 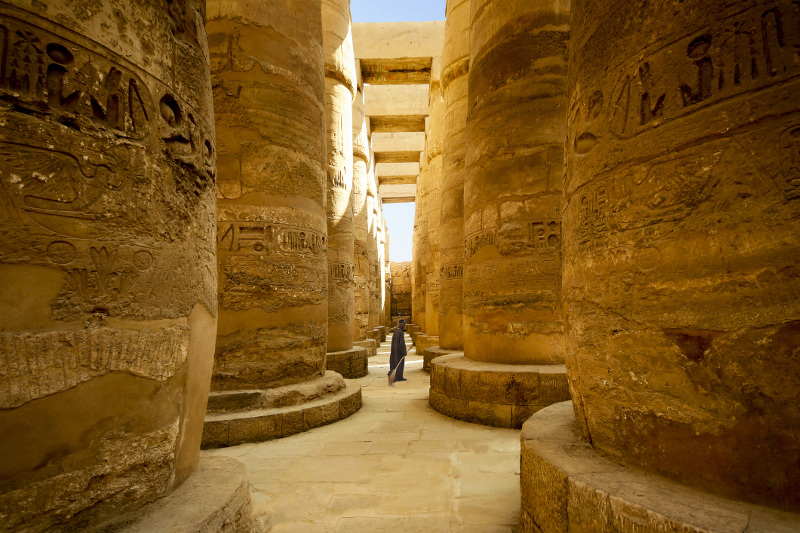 Dating back to 2055 BC, Karnak is the second largest religious site in the world

With its majestic columns, imposing statues and towering 30-metre obelisk, the Karnak Temple Complex will make you feel deliciously insignificant, despite its ruin.

Dedicated to Amun, the King of the Gods, this city of temples is so vast that the Cathedral of Notre Dame could fit comfortably within the Great Hypostyle Hall alone. This staggering hall is the largest room of any religious building in the world, although only the soaring 20-metre columns remain. 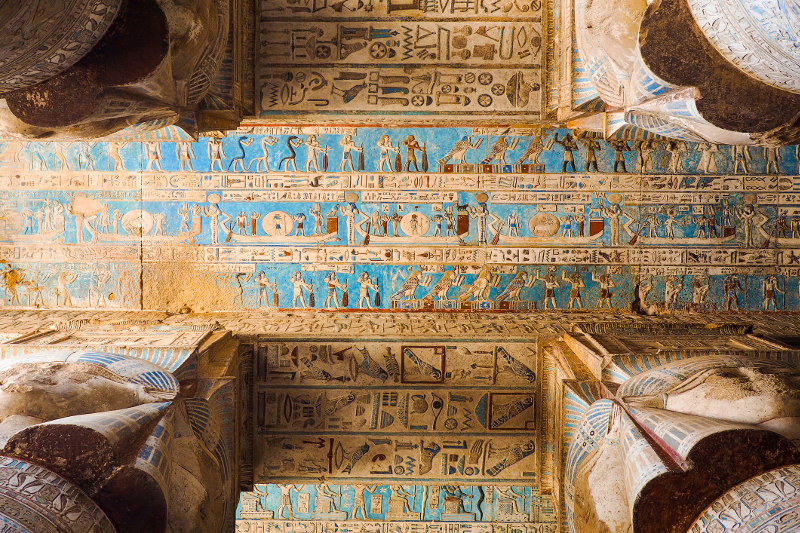 Hathor was the ancient Egyptian goddess of beauty, love and joy, and perhaps this is why her dedicated temple is one of the best-preserved in Egypt.

The temple is akin to a many-roomed fortress, with shrines, lofty halls and spiral staircases still intact. Visitors can climb to the roof or down to the ‘basement’, a small crawl hole where priests once hid from persecution.

Although the Romans desecrated the lower walls, the upper walls are still delightfully bright with exquisite paintings and carvings. For an awe-inspiring dose of history, head outside and find the large carving of Cleopatra and her son Caesarion, who was fathered by Julius Caesar. 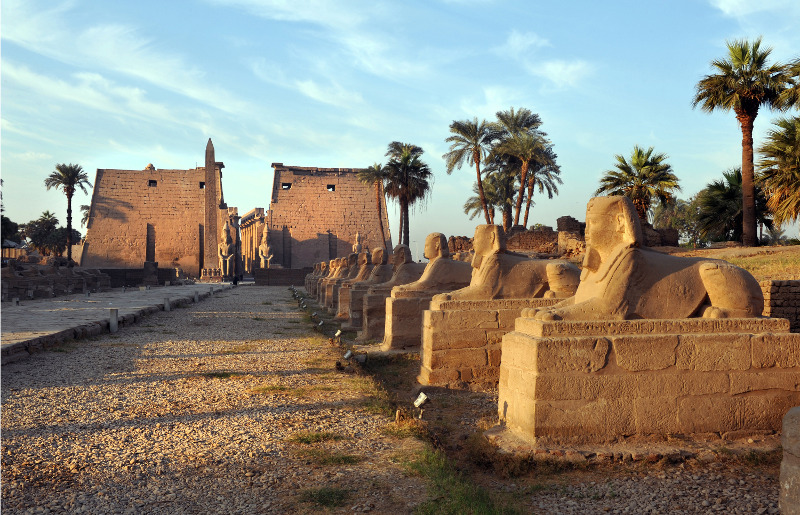 The original Avenue of Sphinxes may have contained thousands of statues, but many are still buried under Luxor

The entrance to the Temple of Luxor is dominated by two massive statues of Rameses II and a 25-meter-tall obelisk. The granite spire was once half of a pair, but the other now stands in the Place de la Concorde in Paris.

The complexes of Luxor and Karnak were once connected by an avenue lined by hundreds of sphinxes, and the remnants make the approach to the Temple of Luxor gratifyingly dramatic. The existence of this ceremonial route was only confirmed in 2010, when 12 additional sphinxes were unearthed in Luxor. 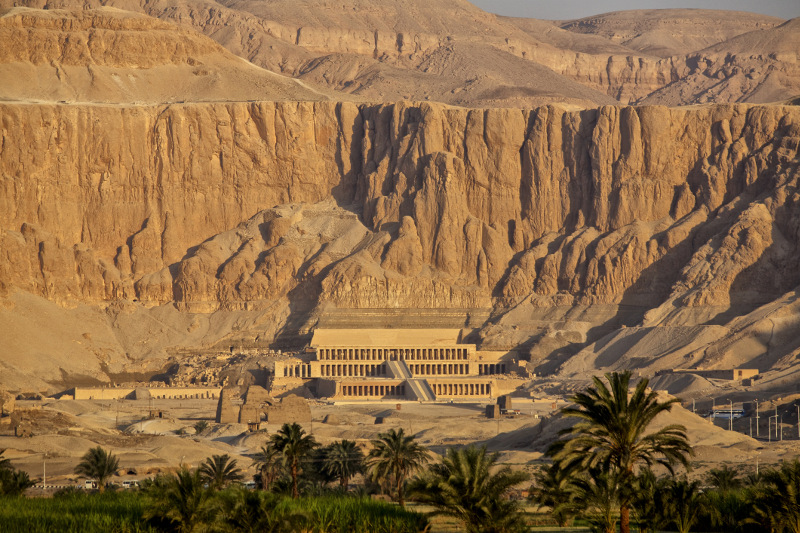 Hatshepsut's successor destroyed all records of her, but archaeologists revived her memory 4,000 years later

Built at the base of a daunting stone amphitheatre, this mortuary shrine commemorates the reign of Hatshepsut, the only queen of Egypt who proclaimed herself to be king.

Queen Hatshepsut served as regent for her stepson, but eventually seized the crown for herself. To fortify her claim as supreme ruler, Hatshepsut dressed in traditional kilt, crown and false beard of a male pharaoh, and Egypt prospered under “His Majesty’s” rule.

Hatshepsut’s shrine is located near the entrance to the Valley of Kings. The temple has been carefully reconstructed, and the picture-perfect terraces and stately columns make it one of the most popular attractions for those who travel to Egypt. 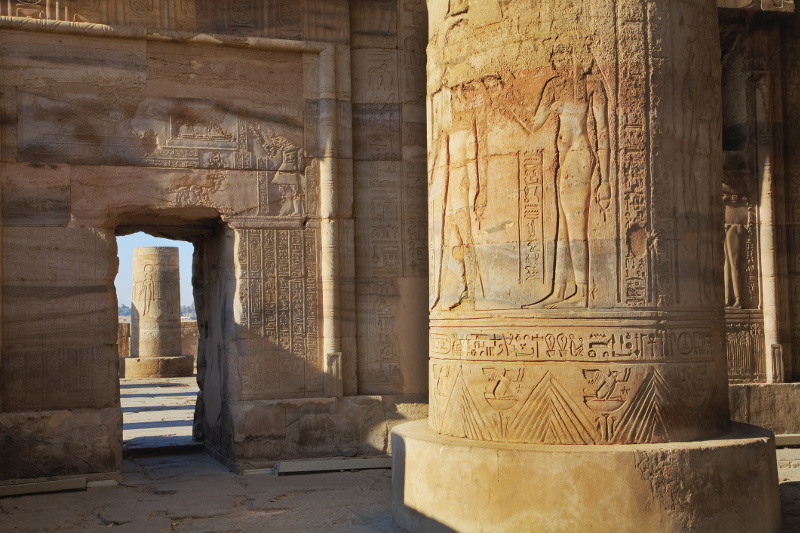 Among the treasures found at Kom Ombo were ancient versions of forceps, scalpels and prescription bottles

While most temples worship one deity, Kom Ombo is divided to honour two gods. The southern half is dedicated to the crocodile god Sobek, while the northern end celebrates Horus, the falcon.

This unique, symmetrical design was the brainchild of Ptolemy VI Philometor, who believed a duplicate set of chapels under the same roof would appease the contention between Horus and Sobek. 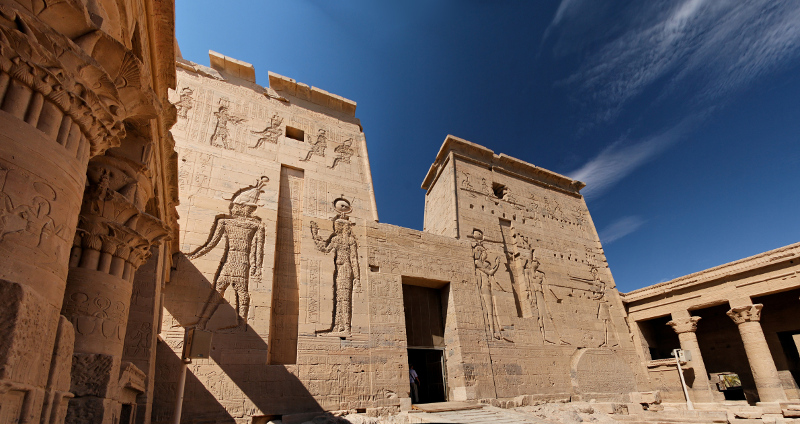 The Temple of Isis resides on an island of the Aswan, a pocket of emerald greenery set against the dusty cliffs of Nubia. The original temple was flooded in 1906, but in the 70s a remarkable international effort relocated the temple to a new island, stone by stone.

Beautifully preserved sculptures, hieroglyphs and carvings tell many intriguing tales of the goddess Isis. Even the graffiti has a historic story to tell - search for the French inscriptions left by the soldiers of Napoleon in the 18th century. 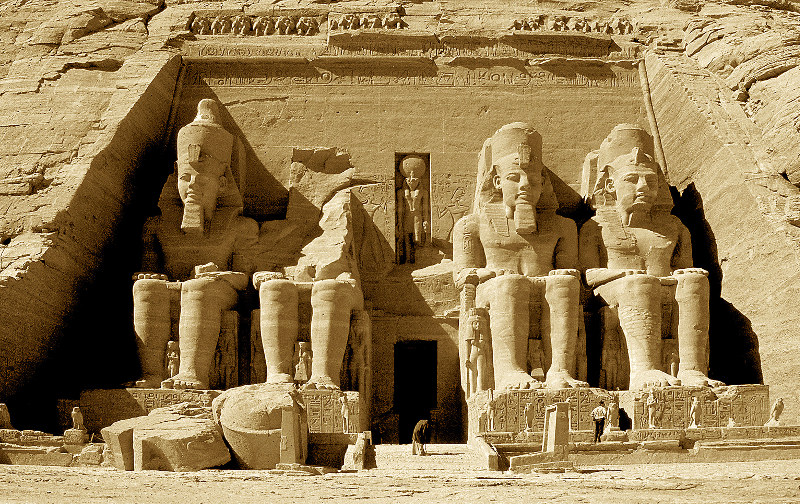 Rameses II built the twin temples of Abu Simbel as a lasting monument to himself and Queen Nefertari. The temples were carved into sandstone cliffs overlooking the Nile, but the Aswan High Dam made it necessary to relocate the temple in its entirety in 1968.

The Great Temple is flanked by four colossal statues of Rameses, while slightly smaller depictions of the king and queen adorn the entrance to the Small Temple. The halls extend 56 metres into the cliff face, and on two auspicious days of the year, the first rays of the sun illuminate the length of the shrine to halo the innermost sanctuary.

You can travel to Egypt's fascinating temples and more on Uniworld's 12-day Splendours of Egypt and the Nile tour. Get in touch with your local Travel Associates expert today and start dreaming of Ancient Egypt.

13 Experiences in Queenstown you Don't Want to Miss