TRAVEL BLOG Riads in the Red City of Marrackech

Riads in the Red City of Marrackech

Sunset is a beautiful time anywhere in the world, but it’s particularly magical in Marrakech. I arrive in the city at this golden hour, admiring the vibrant shade of pink blanketing the city as the sound of the call to prayer lingers in the air and my transfer driver expertly navigates the busy medina laneways. I’ve taken the advice of countless recommendations to stay in a riad during my stay. And while I’m told they’re beautiful inside, so far the journey to get to mine is an interesting one. 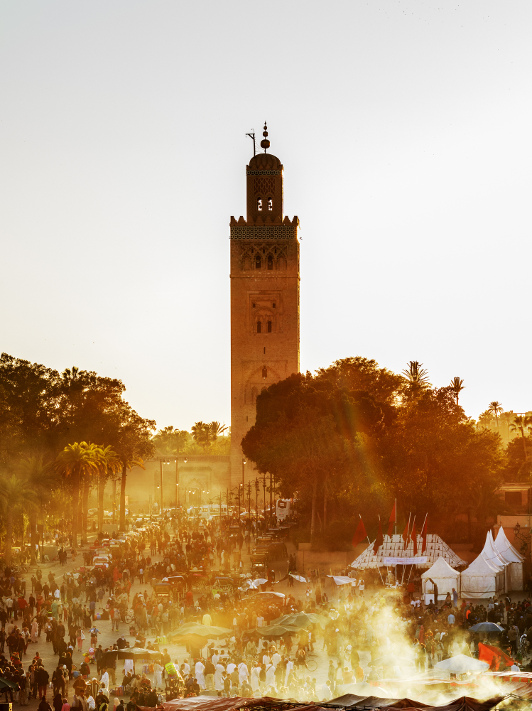 After a couple of minutes of slowly inching down a street with a steady stream of people and mopeds on either side, the driver stops, yells something out the window and then gestures that we’ve arrived. I step apprehensively out of the car to find we’re not at a riad, but in a small crowded market square. Despite my confusion the driver seems confident in his actions. A young man grabs a wooden wheelbarrow and takes my bag, and without a word exchanged I realise I am to follow him.

He leads me down a busy street as people, mopeds and donkeys battle for space. A sharp turn off the busy road and I’m led down a little laneway, followed by another. Before I begin to slightly panic about my strange surroundings, he stops in front of a large door and rings a bell. Fast forward a mere 10 seconds and I find myself in an opulently decorated room surrounded by candles and old black and white photos of Marrakech, with mint tea and almond biscuits served in front of me. It’s the quickest and most relaxing check-in experience I’ve ever had. 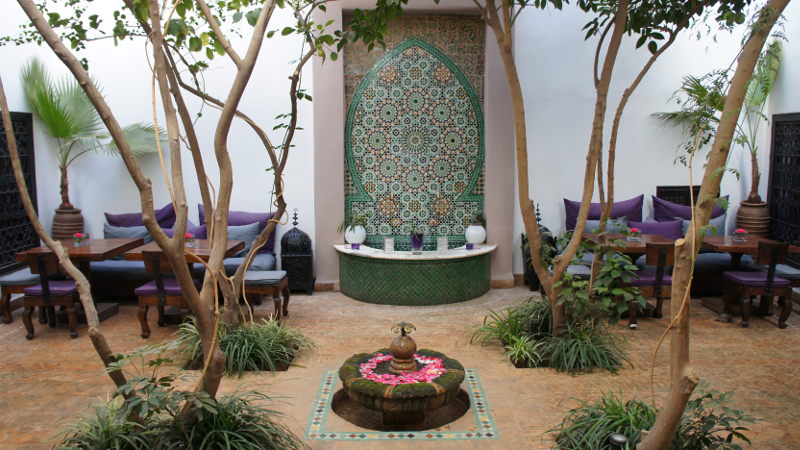 Derived from the Arabic word for ‘garden’, Morocco’s traditional riads are multiple story houses centred around an Andulusian-style courtyard, usually featuring a fountain. Originally built to house multi-generational families, many of the riads in Marrakech have been transformed into boutique hotels, usually featuring no more than six guest rooms as well as other facilities such as a hammam and pool.

After I’ve finished my mint tea, the signature Moroccan beverage, the owner of the riad gives me a tour of the house, starting with the peaceful and picturesque courtyard. The space is perfectly shaded with lemon and orange trees and to my delight, home to a pair of pet turtles. The courtyard is also where dinner is served if you choose to eat in, which is exactly what I opt to do that night. Sitting by the turquoise tiled fountain, I’m served up a three course feast. The main being of course, a fragrant chicken tagine; a traditional dish which involves cooking and serving meat and vegetables in a conical clay pot. For drinks, while traditional restaurants in Morocco don’t serve alcohol, most of the city’s riads will happily offer beer and wine. 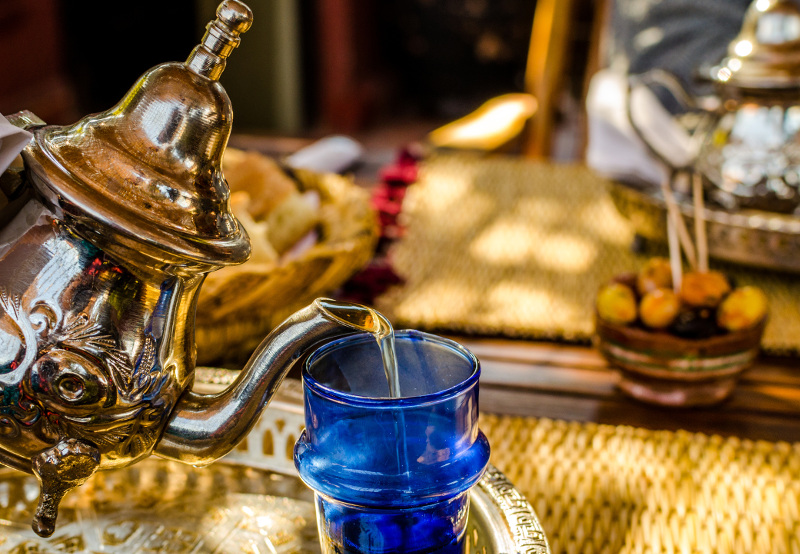 Following dinner I say goodnight to the resident turtles and retreat to my room. I’m delighted to discover it is a spacious suite featuring a wooden four poster bed, traditional lanterns, sunken bath and Moroccan-style motifs. While riads typically embrace the original style of rooms and Moroccan style decor, many have added the mod cons travellers have come to expect, including a safe and air-conditioning - which I make great use of as I doze off to sleep.

In the morning I make my way through the riad to the rooftop for breakfast. On the roof you can see an almost endless stream of rooftops in shades of apricot and pale pink, framed by the Atlas Mountains. And even though the hustle and bustle of the city is only a few metres away, it’s an incredibly peaceful spot to start the day. 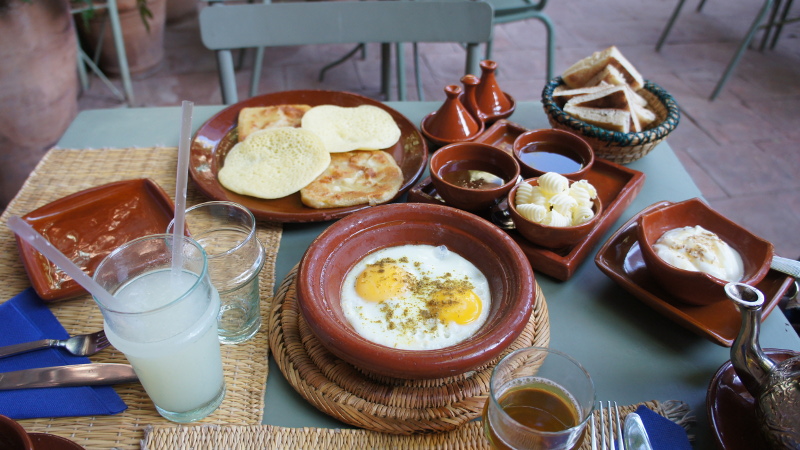 Breakfast in a riad is not your typical hotel buffet. There’s no sad cereal to be seen. Instead I’m served a silver tray of familiar and foreign plates. There’s freshly baked bread, homemade yoghurt, a range of homemade jams, fresh fruit and what I’m told are M’smmen, which translate to crispy moroccan pancakes, as well as freshly squeezed orange juice. And just when I think I can’t possibly handle any more food, eggs cooked in a tagine are also offered.

With a full belly and a blissful night’s sleep, I’m ready to get out for an adventure in Marrakech. Before I go, the owner of the riad sits me down with a map to help me navigate the laneways of the medina. Not only that, he also points out great places to visit and eat, offers me tips on how to haggle in the souks and gives an idea of how much a taxi should cost to reach the attractions outside the old city. On my way out he even walks me to the main square so I don’t get lost, and with that I feel more confident than ever to tackle the city and shop for a bargain. 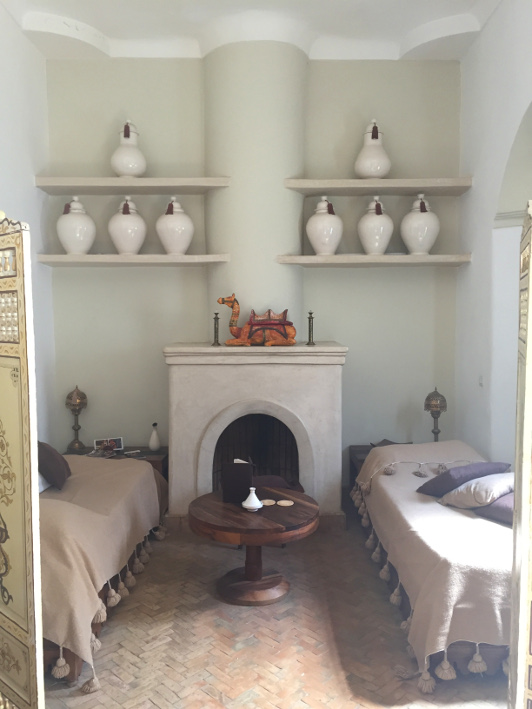 A few hours later and with two leather ottomans to my name, I return to the riad to get out of the afternoon heat. Walking into the building during the day, it hits me just how much of an oasis a riad really is. On the street there is hustle and bustle, moped’s beeping, vendors yelling, children playing, but in the riad the only sound you can here is the trickling fountain in the courtyard.

To further embrace the relaxed atmosphere (I am on holiday after all), I book in for a session in the hammam followed by a massage. Similar to those found in Turkey, a hammam is a small bathhouse and an integral part of Moroccan life dating all the way back to the 8th century. Public hammams, segregated by gender, can be found throughout Marrakech, often nearby mosques, schools and the markets. If, like me, you’d prefer a private experience, most riads will have an onsite hammam and spa. 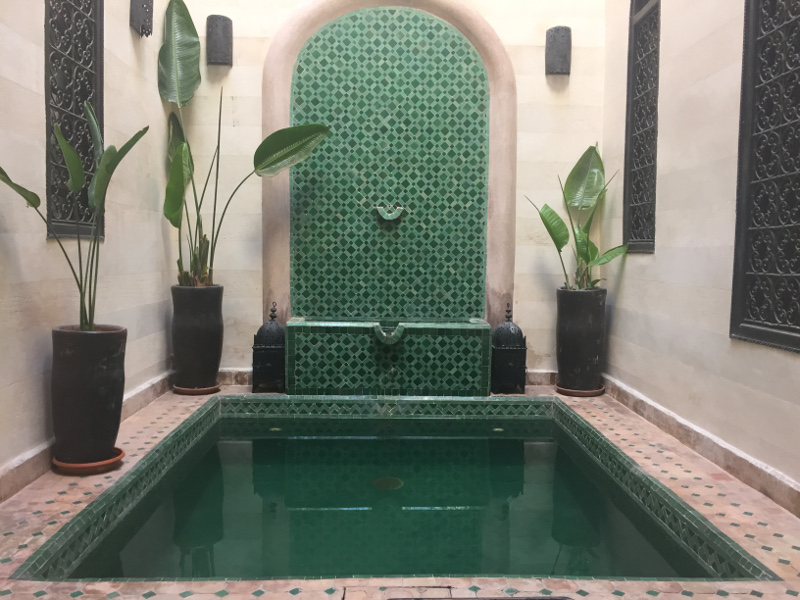 For my visit I discover the hammam is similar in size to a large sauna but instead of hot stones and wood, it features a tiled bench that is heated from underneath, as well as a deep sink. The masseuse asks me to lie down on the bench where she then proceeds to pour buckets of water over me before washing me with a black soap made from olive oil called savon beldi, and then scrubbing my skin with a hand mit known as a kess. It’s a unique experience, and one that I’m told is very good not just for your skin, but for your circulation, muscles and immune system.

After being scrubbed and washed from head to toe (she even washed my hair) followed by an hour massage, I take the opportunity to bask in my blissful state on the rooftop. In addition to breakfast tables, the rooftop also features sun loungers which I make good use of. It’s the perfect spot to take in the magical Marrakech sunset. 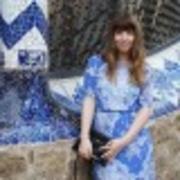 The Thrills of Cruising the South Pacific

The Ghan: A Historic Rail Journey through Australia’s Red Centre 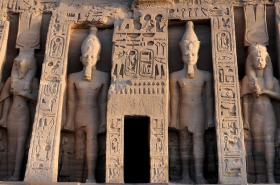 Beyond the Pyramids: Travel to the Temples of Egypt
Africa & Indian Ocean