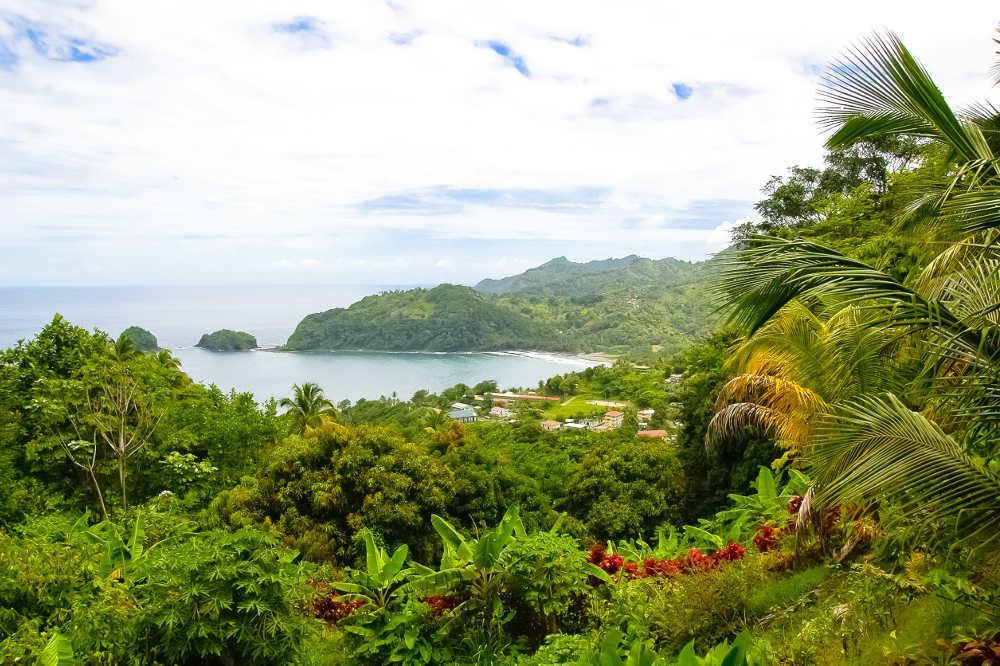 TRAVEL BLOG Dominica: The Hidden Jewel Of The Caribbean

Dominica: The Hidden Jewel Of The Caribbean

When Anthony Trollope sailed through the Caribbean in 1856, he declared Dominica to be "the most picturesque of all the islands", and noted down "an ardent desire to be off and rambling among those green mountains".

Sadly his schedule didn’t permit this, but it’s precisely why I’ve landed on this colossal conference of volcanic peaks armed with hiking boots, insect repellent and an expectation that things could get extremely wet and muddy.

Never to be confused with the Dominican Republic, Dominica is the antithesis of the Caribbean holiday cliche.

It is almost twice the size of Barbados but has very few white-sand beaches, no major international airport, no all-inclusive resorts and only gets a modest attention from the cruise-ship circus. Sandwiched between Guadeloupe and Martinique, it is just a 30-minute flight south of Antigua.

And while that popular island boasts that it has a beach for every day of the year, lesser-known Dominica proudly responds that is has just as many rivers.

Oh yes, it rains here. More than 7,620 millimetres annually in some parts – which is why I recommend visiting between January and May, the drier season, and staying on the coast, which gets less of a lashing than the interior. “If the weather is wet here, I tell my guests to go to the Roseau Valley,” advises Alicia Davison, co-owner of the Pagua Bay House hotel near Marigot. “It’s always raining there.”

I’m surprised to find so many good places to stay here given that the island only gets about 31,000 foreign visitors a year.

Many have been created with phenomenal determination by pioneers who clearly love this nonconformist island, ranging from Mark Steele, a genial English musician who self-built the 10-room Beau Rive near Castle Bruce, “starting with a cutlass and a cow”, to Gregor Nassief, a Dominican businessman who spent 17 years negotiating to buy the 1.8 hectares of coast overlooking Prince Rupert Bay where the 5-star villas of Secret Bay now sit in exclusive splendour.

Life here has always suited the independent-minded. In the 17th and 18th Centuries, as the French and English battled for control of the Caribbean, Dominica became a last refuge for the indigenous Caribs. “The island was meant to stay neutral,” explains local historian Lennox Honychurch, “but the fortunes to be made from sugar were too great.”

Well, it has the mountains, but not the mindset. In 1763, the British took over. Now Dominicans drive on the left, use British-style plugs and have relatives in Neasden, but the map is still sprinkled with Gallic memories. Fond St Jean, La Haut, Morne aux Diables …

Samoa was also home to a literary luminary: Treasured Islands In The South Pacific

Hop across to the Sea of Cortez: The World's Aquarium

Thanks to a foresighted administrator, in 1903 the last of the Caribs were given a 1,500-hectare reserve which survives today as the Kalinago Territory, visitors welcome. Out of a community of 3,500 residents, about 500 still have pure blood, including Fatina Sirena, who guides me around an interpretative centre explaining their history and lifestyle. Her high cheekbones are clear signs of an Amerindian ancestry, and it is heartening to learn how traditional skills such as making canoes from gummier trees, weaving reed baskets and using bush medicine have survived.

The Carib word for Dominica, Waitukubuli, meaning 'tall is her body', now headlines a 250-kilometre national trail that runs the length of the island. It would take two weeks to walk in full, so most visitors just tackle various sections graded from easy to advanced.

Along with diving, hiking is a chief reason to come to Dominica. Challenges include a six-hour round trip to the steaming Boiling Lake in Morne Trois Pitons National Park, and an ascent of Morne Diablotin, the island’s highest point at 1,447 metres. Its summit is usually capped with mist but if, like me, you suffer from conquering syndrome, it is a rewarding work‑out.

Most hikes soon become a hot and dirty scramble, and it’s worth visiting at least one of the island’s monumental waterfalls. After a 90-minute hike to Victoria Falls, clambering over boulders and sloshing through rushing waters framed by towering cliffs, I become a total convert. Why bother with the warm, salty sea when you can plunge into reviving freshwater pools and thundering torrents offering a free massage?

Until 1956 there were no proper roads on Dominica. Today driving around the island is a swirl of intestinal bends and inland climbs enlivened by perturbing place-names such as Massacre and Valley of Desolation. My favourite is Paix Bouche, which my taxi driver translates as “keep your mouth shut and climb".

Down at the Petite Savanne cricket ground, one boundary is a ravine, another cliffs falling away to the sea. In the south-east the roadside is dotted with cottage distilleries that produce 85 per cent of the world’s bay oil, which is used in perfumes and cosmetics.

The nature here is indeed spectacular but not always kind. In 1979, when Hurricane David swept through, it left three-quarters of the population homeless.

The terrifying force of its 240-kilometre-per-hour winds is made clear in the Botanical Gardens in the capital, Roseau, where a yellow school bus lies crushed beneath a massive baobab. No one was injured, but the wreckage has become an essential sight when touring this ramshackle port of dilapidated wooden buildings and colonial leftovers, which include the Caribbean’s last-standing barracoon used for holding slaves.

Rum fans will be pleased to know that a distillery, Macoucherie, still survives, using island-grown sugar cane. Drop into Francis Enterprises, which also sells motorcycle tyres and cooking oil, and you can sip some poured straight from the barrel for EC$2 ($A1) a tot.

Roseau, frankly, could do with a little rescuing. Among its crumbling buildings is the house, now in private hands, where the author Jean Rhys, best known for her novel Wide Sargasso Sea, lived as a child.

Last year marked the 25th anniversary of her death and in other countries (Switzerland springs to mind) there would have been reverential museum and literary events to enjoy. As compensation, I wander along to Roseau’s splendid wooden Carnegie Library, built in 1907 with a wraparound veranda to breathe in the sea breezes. Today it is full of uniformed schoolchildren dutifully doing their homework, with a little smartphone activity under the table.

Rhys left Dominica at 17, but her writings are infused with memories of the island, with its "hills like clouds and clouds like fantastic hills", and the "treacherous, tremendous sea".

While much of the Caribbean has been overwhelmed by cruising, luxury hotels, golf and real estate, this is an island that still has its own moods and character.

And surprises, as I find when I go snorkelling at Champagne Reef in the Soufriere Scott’s Head Marine Reserve. Here I see puffer fish, fan corals and a wreck. But what makes this extra-special are the myriad streams of bubbles rising from the seabed, the result of subterranean geothermal springs. As I roll around in this enchanting fizz, having my own Hollywood moment, it is a joy to be on a Caribbean island still rich with secrets.

This article was written by Nigel Tisdall from The Daily Telegraph and was legally licensed through the NewsCred publisher network.