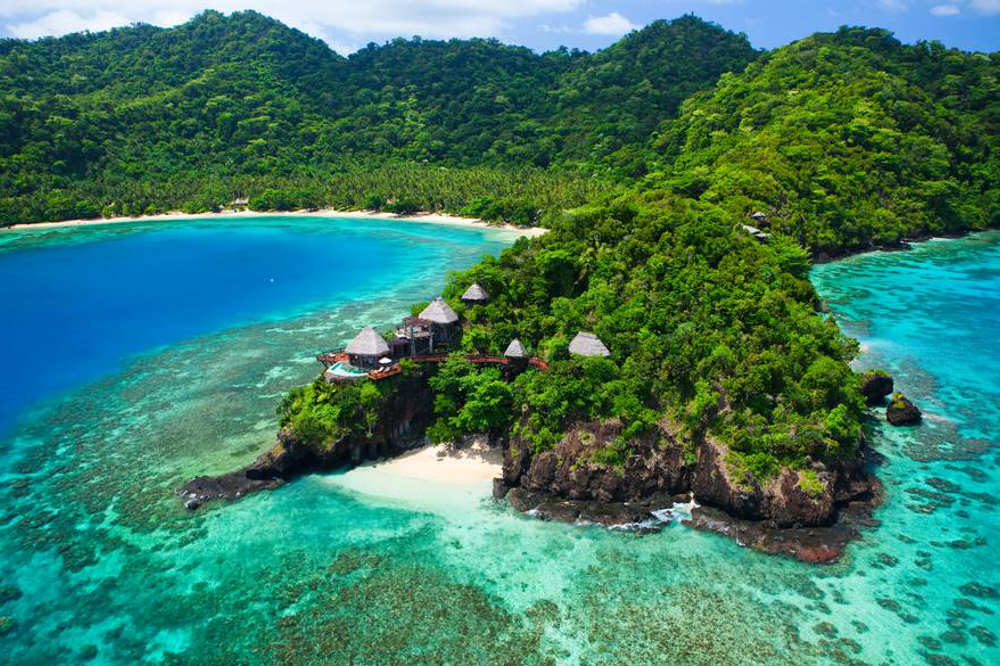 The American millionaire Malcolm Forbes had just about every toy a man could want: a Boeing 727, a series of five yachts (all called The Highlander), hot-air balloons, a French chateau, a collection of Harley-Davidsons. Before he died, Forbes declared that there was only one material possession from which he never wanted to be parted – his island in Fiji, Laucala, where he is buried.

Looking out from his gravestone there, inscribed with the words 'When Alive, He Lived', it is obvious why he wanted this to be his final resting place. If Laucala isn’t heaven, I’m not sure what is.

In terms of natural riches, the 1,420-hectare Pacific island has it all: steep mountains with views over inky seas and turquoise bays, subtropical forests burbling with birdsong and lit up with exotic flowers, and underground aquifers full of fresh water. The air is sweet with the smells of fruit trees and coconut. A dozen beaches fringe its shores.

And in the distance a reef, rich with Technicolor coral and marine life, protects it from the sea. The island is so picture-perfect, in fact, that it is almost kitsch in its beauty: as unspoilt today as it was when the Dutch sailor Abel Tasman explored these waters in the 17th Century.

Fortunately, Laucala’s new owner, Dietrich Mateschitz, not only relishes this natural bounty but is also obsessed with protecting it. When the Austrian Red Bull billionaire bought the island from the Forbes family in 2003 for $US10 million ($A14 million), he insisted that there was to be as little impact on the environment as possible. What he wanted was a Fijian resort that he could fly over in his little Husky floatplane without knowing it was there.

Today, just a tiny sliver in the north of the island is inhabited. When creating the 18-hole golf course, with glorious views over glossy coconut plantations, Scottish designer David McLay Kidd was told to cut down as few trees as possible.

The owner’s dream was to make the island totally self-sufficient (it is currently 80 per cent so), hence the 100-hectare farm with its free-range pigs, cattle, chickens and quails. Laucala also has a vast herb garden, a temperature-controlled nursery for growing exotic plants and three enormous hydroponic greenhouses in which to nurture vegetables that wouldn’t survive in the humid, insect-infested soil outdoors.

Best of all, Mateschitz is happy to share all of this. “He’s here mainly in August, with his girlfriend and son,” said the new general manager, Andrew Thomson, who formerly headed up Amanresorts. “It was built for him and his friends, but there are only so many who want to come – or can come. So rather than let staff get bored when he’s not here, and to let others enjoy it, too, he decided to share it.”

Though opening up the island to visitors sounds like altruism, for Mateschitz it is business. His aim is to make Laucala one of the Top 3 hotels in the world, with a 5-star tariff to match.

To achieve this, every detail has been thought about, whether it is in the 25 spacious ocean-facing villas, each with its own beach or tropical garden, or in the five restaurants, from a plantation-style house overlooking manicured lawns to a no-shoes Pool Bar sheltered by towering 'petals' of thatch.

The dive centre, meanwhile, is equipped with myriad water toys – and soon, a DeepFlight Super Falcon submarine, for which the owner paid more than $A2.2 million. In the gym and spa, the same money-no-object ethos prevails, while the trademark attention to detail is repeated in the Cultural Village, which celebrates Fijian crafts and traditions.

The best thing about Laucala, though, is its pools. Most islanders around the world have problems sourcing fresh water. Not here. Everywhere you look there are torrents of the stuff: coursing down hills into ponds covered in water lilies, cascading down waterfalls beside bars, glowing turquoise against the glass end of the lap pool, and filling the massive 5,500-square-metre landscaped swimming pool, dotted with islands, that extends right to the beach.

In my two-bedroom overwater villa, I even had my own pool set into black volcanic rock – albeit filled with seawater rather than fresh. Over three days, I swam in it only twice.

Instead, I showered outdoors beside crashing waves, wallowed among hibiscus petals in my round wooden tub, or lounged on my own expansive deck with a watermelon juice in my hand, or perhaps a square of carrot cake delivered as if by magic every afternoon.

I had suspected that the food at Laucala would be good because Mateschitz – or DM, as he is affectionately known on the island – also owns the renowned Ikarus restaurant in Salzburg. What I hadn’t expected was for it to be among the best I have ever tasted – not just in a hotel, but anywhere.

The Australian chef, Anthony Healy, may be only 27 but he has been cooking since he was 15, earning his spurs in London at Les Trois Garcons and outside Paris at La Cote Saint Jacques. Like Mateschitz, he is obsessed with sustainability.

As well as producing meat and vegetables on the island’s farm, he buys fish from local fishermen and catches it himself with a speargun. His aim, with the help of Thomson, is to produce in two years the very best Wagyu beef.

In the meantime, Healy’s seven-course degustation menu delivers delicate concoctions with enormous punch, from rich morsels of beef tortellini with charcoal puree and white-tomato foam to the firmest crayfish with papaya. Even the croissants at breakfast are as crisp and buttery as in Paris – but served without the Parisian attitude.

But then, the attitude here couldn’t be more positive. Fiji is the Land of Yes, and on Laucala you get the feeling that anything is possible. Want to hike a mountain at dawn, go diving, horse-riding, water-skiing and have a massage in a day? Sure, no problem (I tested that one out).

While you're in the South Pacific: Sailing By The Stars In The Cook Islands

French Polynesia has its share of beautiful accommodation: Where To Stay

Make the most of your Fijian stay: Fun In The Sun, Fiji Style

Service with a smile

No sooner had I strolled off the beach than a smiling, flower-bedecked Fijian offered me a freshly squeezed tangerine juice – “with ice, just as you like”. At night, trainers were whisked away and returned, sans mud; laundry was delivered wrapped in tissue; and fresh flowers were placed by my bed.

But then, when you have the highest ratio of staff to guests anywhere in the world – 350 employees to a maximum of 80 visitors, or 13 staff to every room – and one of the world’s top hoteliers is in charge, pretty much anything is possible. At the charming thatched spa there are nine therapists on hand to administer virtually any treatment you fancy, and at the golf club Tony Christie, a New Zealand PGA-tour pro, is there to give lessons.

In each of the restaurants, the chefs are primed to receive guests at any time. If you want Thai food, you can just show up at Seagrass restaurant, which is perched on a cliff, and they will whip up ginger prawns or sear beef for you on the teppanyaki grill. Prefer soft-shell crab sushi? The Pool Bar staff will be waiting – day and night – with freshly caught critters and rice.

Even at the Plantation House, with its seven-course degustation menu, guests are not required to make a booking. “We want them to feel they can be as spontaneous as they like,” Healy told me.

Right now, there are rarely many guests on the island. Laucala is not advertised and no special deals are offered on the villas (which cost from $A5,400 to $53,300 a night, including food, drink and activities, with a minimum stay of four nights). One gets the feeling that the publicity-shy DM doesn’t really care much for other guests, and would be happier if no one else was there at the same time as him.

But, given that he spends only one month a year on the island, having other people here helps to cover the costs – which, when you have four planes and a gas-guzzling barge to maintain, some 3,000 litres of diesel to pay for every day and 350 staff salaries to fund, must be fairly substantial.

However, since Red Bull makes more than $A1 billion in sales a year and DM owns nearly half of the company, the costs to him of maintaining Laucala are probably pretty small beer. For many luxury travellers, the charges aren’t excessive, either.

Take over the whole island and fill it with 80 friends – as Elle Macpherson did for her wedding – and it will cost $1,875 (about $A2,670) a head, all-inclusive. That is the price of an average 5-star hotel suite in most big cities – and significantly less than David Copperfield’s Musha Cay in the Exuma Islands or North Island in the Seychelles.

I’m not saying Laucala is a bargain but it is a place that makes you feel, as Malcolm Forbes put it, that you have lived. And that is difficult to put a price on.

Dominica: The Hidden Jewel Of The Caribbean