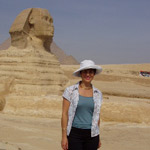 On my last day in Cairo, I purchased a book on Ancient Egypt. The first paragraph read:

"Few countries possess such spectacular monuments as Egypt; few countries arouse such extravagant feelings as Egypt. First-time visitors react as if they have made a personal discovery - which in a sense they have - and cannot wait to pass on the special, but by no means unique, reactions to others."

I too came home from my trip totally enlightened and full of emotion. My view is this - if in your lifetime you never get around to visiting Egypt, you have truly missed out on an experience like no other. I had a wonderful time and can't wait for the first of my clients to say, "You were right about Egypt!" To touch, feel, hear, see and experience Ancient Egypt in all its glory was an experience I will never forget.

We first spent two nights in Giza to experience the three Pyramids and the Sphinx, before flying to Luxor to begin our four-night Nile cruise ending in Aswan. Every day we stopped to view more amazing sights and thousands of years of history. Upon finishing the cruise we continued on to Abu Simbel and then back to Cairo to experience life in a city of 17 million people.

My favourite moment was walking amongst the 122 columns at the Karnak Temple complex in Luxor. This part of the temple was the work of Seti I and his son Ramses II. The west processional was flanked with 122 columns topped with closed papyrus buds, while the east avenue consisted of twelve columns, each 21 meters high and topped with a papyrus capital.

At the Luxor Museum, I managed to catch a glimpse of the 3000-year-old mummy of Ramses I, which was returned to Egypt in 2003 after being in North America for more than 140 years. The mummy was stolen by grave robbers from a tomb near Luxor and taken to Canada by James Douglas in 1860, where it was placed in the Niagara Falls Museum. Its identity remained unknown until 1999 when the mummy was analysed using hi-tech scanning equipment at Atlanta’s Michael Carlos Museum.

One thing that still stands out in my mind and will probably never go away is how incredibly intelligent the people of Ancient Egypt were. They invented so many things and produced futuristic structures that simply should not have existed in that era. How and why this happened still baffles historians, and is the main reason I found Egypt so fascinating.

Our experiences are only half the story.  Share yours in the comments section below. 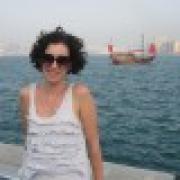 Exploring the Philippines and Singapore