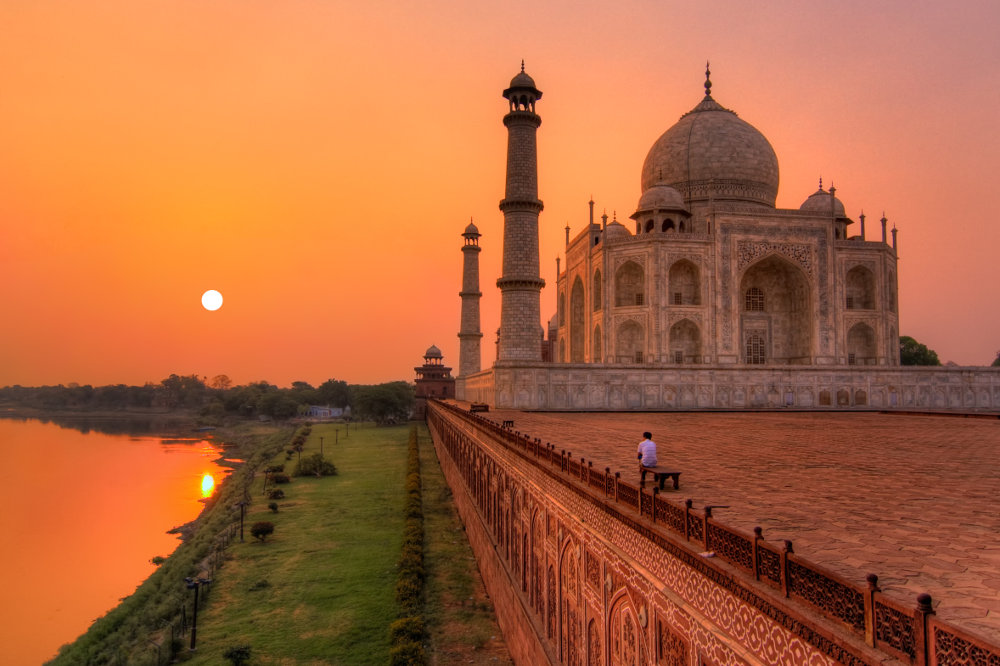 One of five luxury trains operating in India, the 19-car Maharajas’ Express provides an unrivalled way of seeing some of the best-known sights in the north and west in comfort and style. The balance between eating on and off the train, daytime train travel and excursions – by Mercedes coach – is well judged.

The train moves on each night, so the earplugs in the bedside drawer are necessary. The numerous staff are generally excellent and the train is kept looking immaculate.

The first tour begins in Jaipur, the only city in India laid out on a geometric grid pattern and famous for its pink buildings. Among pale hills enlivened by the occasional explosion of mauve bougainvillea is what was the old capital before Jai Singh II created Jaipur from 1727; Amber Palace is a fusion of Mogul and Rajput architecture with hardly a surface unadorned by carving, mirrors, precious stones or painted decoration.

On the polo field of Jaipur’s sprawling City Palace, created by the Maharajas of Jaipur, the train’s passengers are invited to try a few chukkas of elephant polo. On my trip, an alliance of Brazil, Australia and Britain was defeated by the Russians.

Next morning, cocooned in rugs against the early chill, guests leave the train at 6.30 in open-topped land cruisers, which whip through the quiet streets to Ranthambore National Park. The park was once the hunting ground of the Maharaja of Jaipur, and its lightly forested hills and lakes form an area of great natural beauty.

It has 55 tigers, which is an upper limit because each needs a huge territory. Though we left without a glimpse of one, the spotted deer, monkeys, peacocks and pigs were entertainment enough.

The journey on to Fatehpur Sikri allowed time for watching scenes that so enthral foreign travellers in Indian railways. From lush green fields women emerge with bundles of grass perched on their heads, making for a cluster of rudimentary dwellings.

Close by are discs of dung, painstakingly arranged in herringbone fashion to form a beehive-shaped pile to dry in the sun. Herds of long-eared goats are looked after by children too young for school, and camels hauling carts wait at level crossings, their head and necks in a haughty posture as though expressing their disdain for such humble work.

Can there be a more grandiloquent white elephant than Fatehpur Sikri? This vast architectural marvel was commissioned by Akbar, the third Mogul ruler, and work began in 1571.

It was completed in the mid-1580s, but within 15 years had to be abandoned when the water supply gave out and the capital was moved to Agra. We wandered the ornate halls, courtyards and gardens and gave silent thanks to Lord Curzon, who put restoration work in hand in 1905.

Another dawn start, but no one minded because the reason was to see in the soft light the world’s greatest monument to love, the Taj Mahal. This sublime creation by the heartbroken Shah Jehan is incomparable, made the more poignant by his last years incarcerated by his ruthless third son, Aurangzeb. From his prison window Shah Jehan was at least able to see the huge white tomb built for his wife, Mumtaz Mahal.

We continued our appreciation of the Taj Mahal from nearby gardens, sipping Champagne with breakfast in a marquee overlooking the trees and gardens surrounding the great dome; it was hard to imagine the 3.2-kilometre ramp built to enable elephants to drag the Makrana marble to its upper levels.

At Gwalior, south of Agra, a procession of Jains, the men naked and the women in white saris, wound its way through the streets as we approached the formidable fortress, rising from the top of sheer cliffs above the city. After roving the warren of passages and small courtyards in the 500-year-old sandstone palace, we descended to the vast Jai Vilas Palace, designed by Lt Col Sir Michael Filose. The Maharaja of Gwalior’s 400-room palace was ready to receive Edward, Prince of Wales, during his 17-week tour of India in 1875-6.

After sunset the huge square of gardens within the four white wings of the palace made an enchanting setting for dinner under the stars, with changing coloured lights illuminating the dozens of jets playing into the middle of the fountain at the centre of the garden.

Perhaps the least well-known site visited during the week was the medieval fort palace of Orchha. In the Raj Mahal are some vividly coloured 17th Century murals of religious subjects and court life, an insight into the activities that once filled the palaces.

Narrow-entranced camel stables stand beside another palace still decorated with cobalt and turquoise tiles. Returning to Orchha station, we swapped our coach for three-wheeled tuk-tuks – thankfully running these days on compressed natural gas.

Varanasi may be the religious capital of India as one of Hindus’ seven holy cities and the place where the founder of Buddhism, Siddartha, preached his first sermon around 528 BC, but its chaotic public realm makes it a disturbing place. Nonetheless, the evening boat journey on the Ganges to witness the evening puja ceremony is unforgettable: Brahmin priests chant and make offerings, watched by thousands gathered on the steps overlooking the theatrical display of fire-waving and bell-ringing.

Our final day was spent in Lucknow, where a strong presence of army and air force has helped preserve the cantonment area of large bungalows in generous and well-kept grounds. Admirably, the most famous memorial to the Indian Mutiny/First War of Independence has been well cared for post-independence; the Residency was besieged for 87 days, and fewer than a thousand of the original 2,994 incarcerated troops, sepoys and civilians survived. Among the ruined, roofless buildings forming the Residency is St Mary’s church and cemetery where one of the heroic defendants, Sir Henry Lawrence, lies with a simple epitaph: “Here lies Henry Lawrence who tried to do his duty.”

As famine-relief projects go, Lucknow’s Great Imambara must take some beating: this immense late- 18th Century building for mourning has one of the largest vaulted halls in the world: 50 metres long and 15 metres high. Above the hall is an extraordinary maze of narrow passageways on two levels, accessed by 489 identical doorways, with a flat roof above giving panoramic views across the city.

Saris and kurta pajamas were given to all passengers to wear at the final dinner, hosted by the Raja of Jehangirabad and his wife at their city palace in Lucknow. Watercolours of English landscapes jostled on the walls with Victorian prints of scenes from The Pickwick Papers, Indian miniature paintings and photographs of a visit by Jackie Kennedy.

Our entire party could be seated on settees and armchairs in one of the two side-by-side double-cube reception rooms for a performance of Indian classical dances before a buffet dinner. The Raja sounded very like country-house owners in Britain as he talked of the need to make his palaces pay, and his country palace has become a largely educational institution.

As we returned to the capital, it was extraordinary to think that, in the time of our circuit, 210 million journeys had been made on the the trains of Indian Railways, the world’s largest employer with more than a million staff. My previous travels on Indian railways had been in every class from 1st AC to 2nd 3-tier sleepers, and all of them relished, but as I stepped on to the red carpet for the last time I had a feeling I would miss it.

This article was written by Anthony Lambert from The Daily Telegraph and was legally licensed through the NewsCred publisher network.

How To Taste Your Way Around Miami