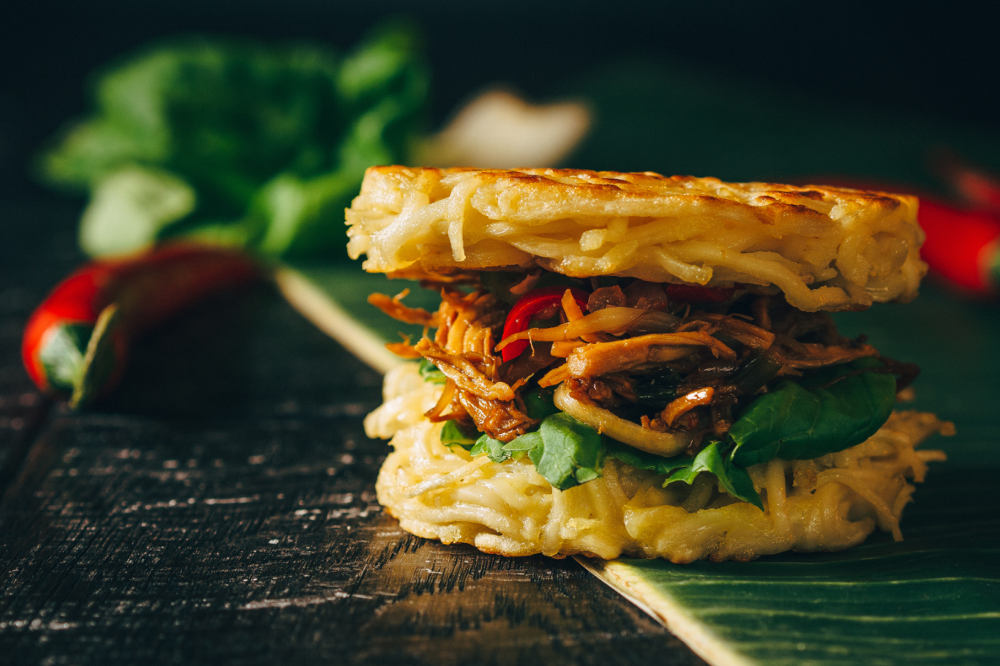 Beneath the giant red sign illuminating the Asian Garden Mall in Southern California, slabs of jumbo, white squid are seared on a smoky grill. Nearby, children pluck fried potato slices off a stick and couples dance to Vietnamese ballads.

It reminds Audrey Dinh of the stories of night markets her Vietnamese grandmother used to tell her as a child, and of those the 28-year-old encounters on business trips throughout Asia. But this one is much closer to home, in the city of Westminster in Orange County, where vendors sell everything from giant prawns and coconut waffles to home curtains and flashing toy pinwheels.

"This is what I see in Asia," Dinh said, as she waited for an order of banh tom khot, a rice flour cake filled with shrimp. "It's very close to Asia."

During the past five years, similar night markets have popped up in major cities throughout the United States, a byproduct of both the nation's expanding Asian-American population — the country's fastest growing racial minority, numbering some 19.4 million — and a growing culinary curiosity for authentic East Asian flavours. Since about 2010, night markets have opened in Chicago, Cleveland, the Los Angeles metro area, New York City, Philadelphia and Pittsburgh.

Several were started by young Asian-Americans who wanted to recreate the frenetic, fast-paced spectacle of an Asian night market in their families' adopted hometowns. Not all have remained exclusively Taiwanese or Vietnamese. Instead, many have evolved into a hodge-podge of cultures and foods reflecting their mixed communities.

"It's been a key decision for us not to try and be like the ones in Taiwan any more," said Jonny Hwang, 35, founder of the 626 Night Market in the San Gabriel Valley, about 16 kilometres east of Los Angeles. "We want our own identity."

Night markets date back to at least the Tang dynasty in China around the year 600. By the Song dynasty in the 12th Century, they had developed into sophisticated, well-organised centres selling grilled meats, stuffed buns and dried fruit.

"The Chinese had a flourishing commercial food scene long before Europe," said Fuchsia Dunlop, an English writer and specialist in Chinese cuisine.

Night markets have continued to proliferate throughout Asia, with one study finding 95 operating on any given week in the city of Kuala Lumpur in Malaysia. In cities like Bangkok, street food remains the heart and soul of local cuisine, sold day and night from carts and makeshift stands. The classic Bangkok night market has evolved from catering mostly to club-goers looking for a late-night eat to offering real shopping opportunities for the city's large, young and relatively affluent middle class.

Wet your whistle: Best Places To Drink In Los Angeles

In the US, the emergence of night markets — some of which attract tens of thousands of people — is seen by organisers as a reflection of how Asian-American communities have assimilated to local culture while also reinterpreting their own. Hwang recalled how when he was a Taiwanese-American teenager growing up in suburban Los Angeles, his and other families strived to fit in.

"While we enjoyed our foods, we didn't really embrace it," said Hwang, whose 626 Night Market features classic Taiwanese favourites and fusion dishes like pho tacos and ramen burgers. "I didn't force my friends to check out stinky tofu."

These days, he said, "Asians are starting to embrace the fact that 'Hey, we have really delicious food. And other people are interested in that food'."

Some US markets are a distant echo of the cheap, raucous places that inspired them. Celebrity chef and food adventurist Anthony Bourdain is creating a huge New York City market he has said will be open late and have the feel of an Asian night market, but also have prepared food stalls by celebrated chefs like April Bloomfield. Others tilt higher end, charging $US50 ($A70) or more to enter and sample food and drinks from top local chefs.

Danielle Chang, author of the cookbook Lucky Rice — a collection of night market recipes — was born in Taipei and funnelled a passion for Asian food into her own night market-like events, including a cocktail-themed market party in Las Vegas.

"I think that the interest in Asian food ... stems from the growing awareness of Asia through the lens of food," she said. "Through travel. Through a new generation of chefs getting classical French training and then returning to their heritage."

Still, creating US night markets has, in many cases, been an act of persistence. Local officials often need to be convinced of their viability, and vendors typically must navigate a tangle of health codes. In Westminster, about 56 kilometres south of Los Angeles, there also was a cultural barrier to pass: Explaining to a non-Asian public why a night market should exist.

"It was kind of hard for our city to understand in the beginning," said Kathy Buchoz, the former mayor of Westminster and a consultant for the Asian Garden Mall's management company. "They understand farmers markets."

Buchoz said officials were skeptical about how many people the market would bring in, but it quickly attracted 3,000 people a night each weekend. And that has been a boon for vendors like Max Nguyen and his business partner. They began operating a stall at the market three years ago and now sell about 900 kilograms of grilled squid a night.

This article was written by Christine Armario from The Associated Press and was legally licensed through the NewsCred publisher network.