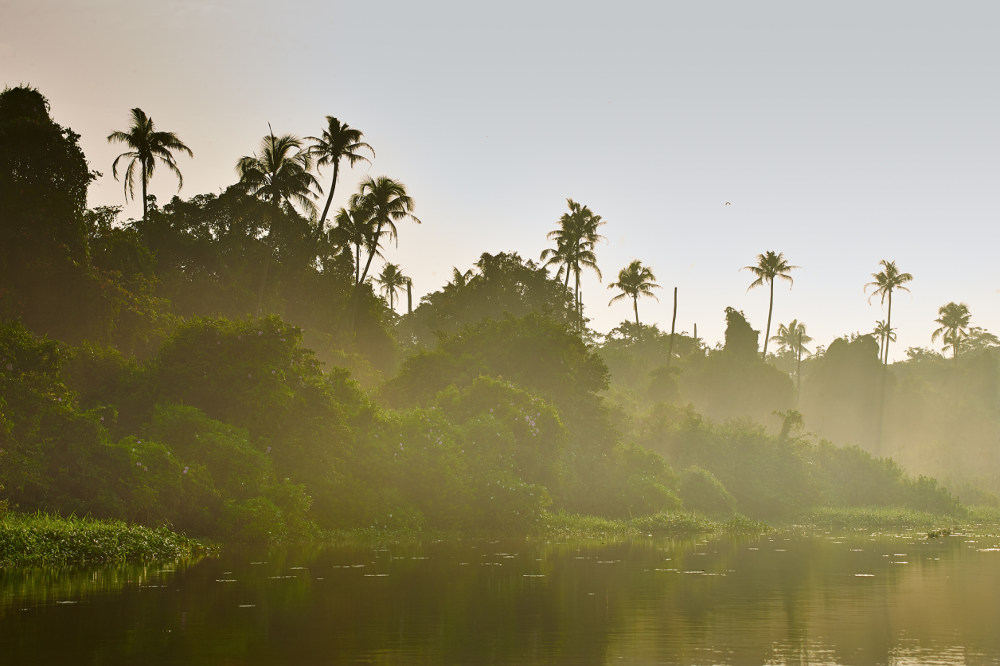 Sunrise on my first morning in India and I’m taking in the sights and sounds of rural Kerala from a taxi. As I had emerged from a night flight and the muted winter greys of home, the scarlet flame trees, red and yellow hibiscus, pinky-white frangipani and glossy-leaved palms that line the road appear especially vivid.

Everybody on the road from Kochi to Kayippuram – women in lime green and dazzling pink saris, men balancing foodstuffs while riding rickety bicycles – had somewhere to go and something to sell. As we neared the pier, the vast expanse of Lake Vembanad, India’s longest lake, shimmered in the distance. Kerala styles itself 'God’s Own Country' and I could see why.

Home On The Lake

My home for the next three days, the Oberoi Motor Vessel Vrinda, was moored at a private jetty. Most travellers tour the lake and its backwaters – a jungle-filled maze of muddy channels and coconut groves – by rice barge. Vrinda is bigger, though, sleeping 16 people – a rattan-trimmed catamaran with a smart restaurant, eight luxurious cabins and a sun deck.

The boat belongs to Oberoi Hotels & Resorts, and offers all the trappings of a luxury hotel – impeccable service, comfort and exquisite food – in microcosm. I walked up the gangway into a rarefied world of ice-cold hand towels and freshly squeezed pineapple juice, checked in and flopped on to my cabin bed. Late afternoon and a siesta later, the captain cast off the ship’s lines and we chugged out on to the lake, the horizon fading fast.

Lake Vembanad is part of India’s largest wetland system, fed by the monsoon rains cascading down from the hills and kept fresh by a long saltwater barrier regulating the amount of seawater that gets in. Cormorants perched on tangled islands of purple water hyacinth, eagles wheeled overhead and chanting from a Hindu temple echoed across the water.

Around the shores of the lake, Chinese fishing nets were cantilevered over the water’s edge – locals combine this method of dunking the net with line fishing from dugout canoes.

A colourful way of life: Magical Journey Through India

Nip across to Nepal: A Nepali Adventure

A Feast Of Fun

Each night after sunset the boat returned to its private mooring for dinner. Each meal on board was a feast of magnificent and often coconut-laden Keralan specialities, rich in spices. International cuisine was available but paled in comparison with the 18-course 'wedding banquet' that was presented one lunchtime on banana leaves.

Entertainment was a bit more hit-and-miss. On the second night we were treated to Kathakali, an ancient Keralan form of dramatic art that recounts Hindu legend through movement and facial expression. An acquired taste, a full performance typically takes all night, I later learnt.

Each day, we would leave the mother ship (which is too tall to fit under the low-hanging power lines that cross the canals) and head into the backwaters on a rice barge.

Under the tutelage of the impeccably mannered and charming Mr Joyce, our guide, we visited an eclectic range of sights, from a church whose service came with rock music accompaniment to a third-generation wood carver who produces Virgin Marys and life-size Crucifixion scenes painted in lurid colours.

His order book, he said, extended worldwide. Christianity is a powerful force in Kerala.

We stopped at the 'secret' Chambakulam boatyard, where a crew of workers was constructing a snake boat under tight security. These 37-metre boats are built from solid jackwood and rowed by a crew of 100 men in inter-village races each August, a major event on the social calendar.

This particular boat cost 2.2 million rupees ($A33,300) to build. As a sign of respect for the tradition it represents, a sign read: “No shoes in the yard, no photos, no smoking and no swearing.”

The canals were sleepy and tranquil, the only movement a flash of turquoise here, as a kingfisher dived for its catch; or white there, as schoolchildren scampered along the banks. The reality, though, is a setting of constant industry.

Untouchables in loincloths were diving into the muddy water to forage for clams in the silt. The clams are boiled and eaten and the shells ground up to make cement. Rice is harvested by hand and mallards from the many duck farms are brought in to peck at leftover seeds and to fertilise the soil before they’re carted off to market.

Kerala is getting richer but not thanks to this subsistence lifestyle, or tourists, for that matter. Locals are abandoning the farming life for better-paid jobs on the construction sites, and in domestic service, in the Gulf.

They send money home to build grand, marble-lined mansions along the canals, returning for a couple of weeks a year, if that, to enjoy the fruits of their labours. Even in God’s Own Country, paradise has its price.

This article was written by Sue Bryant from The Daily Telegraph and was legally licensed through the NewsCred publisher network.