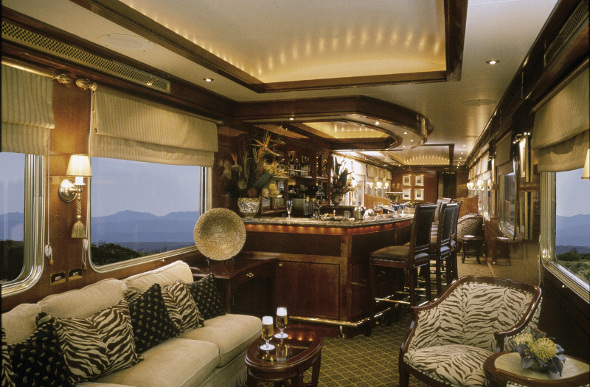 The note on the itinerary is specific: "Evening wear on the Blue Train is elegant and gentlemen are requested to wear a jacket and tie."

I read it for the first time as we are about to depart for our flight to Johannesburg and stuff a jacket and tie in the bottom of my suitcase while my wife scrambles to find an appropriate frock.

The Blue Train is an African institution born out of the steam locomotives that in the 1920s thundered between Johannesburg and Cape Town, carrying passengers connecting with ships departing for England. It was not until after World War II that the 'blue train' appellation, referencing its blue painted steel carriages, was adopted as its official name.

Refurbished and re-launched in 1997, it now rates as one of the world’s great luxury train journeys, running along the 1,600-kilometre stretch of track between Pretoria and Cape Town and vice versa.

Our journey begins on a chilly morning at Cape Town station after a night at the 5-star The Taj Hotel. With uninterrupted views of Table Mountain from many of its suites, it is arguably the best hotel in the city while the curries in its Bombay Brasserie are exceptional.

Our bags disappear, hauled off by liveried Blue Train staff. Sparkling wine is served for those who don’t mind a gargle at 7.30am and at 8.20am, slightly behind schedule, the Blue Train pulls out of the station.

I’ve travelled on the Orient Express from Bangkok to Chang Mai, the long defunct Great South Pacific Express (Orient) from Brisbane to Sydney, The Ghan from Darwin to Adelaide, the Queenslander (Spirit Of Queensland) from Brisbane to Cairns and the Indian Pacific from Sydney to Perth and never before have I encountered a train cabin with a bath.

We’re in a de luxe suite, which exudes warmth and old-world indulgence with its wood paneling and brass fittings. During the day it is made up with a table, armchair, footrest and couch with a full-width window offering panoramic views of the countryside.

As well as a bath, the bathroom features a toilet and hand-held shower, while the bed folds into the wall, being made up as a double while guests are at dinner.

There’s a half bottle of South African sparkling wine in an ice bucket sitting on the table when we find our cabin – all beverages are included in the fare with the exception of French champagne – and we settle back with a glass and watch as the industrial surrounds of Cape Town’s outer suburbs give way to the green pastures, rolling hills and trellised order of the wine country.

It’s a 27-hour journey taken at a steady 90 kilometres per hour, a speed designed for maximum comfort and minimum noise levels.

The last carriage is an observation car, its rear wall one vast window with the adjacent lounge chairs affording the best view on the train.

Our fellow guests are tourists with a sprinkling of South Africans outnumbered by Americans, British and one other Australian couple.

Trains are about rhythm with the stately pace, the subdued hum of the rails and the gentle roll of the carriage as calming as it is sleep inducing. I almost nod off in the observation car before lunch and am kept awake only by my hunger, having had three glasses of wine for breakfast and little else.

Lunch in the dining car is a relaxed affair and I fall upon my salmon and salad, the landscape fading from green to khaki as we roll through the semi-desert of the Great Karoo, the low murmur of conversation accompanied by the gentle clink of glassware.

A luxury train closer to home. Spirit Of Queensland Has All The Bells & Whistles

There is only one stop in the entire journey at Matjiesfontein in mid-afternoon, a tiny, isolated town on the Karoo plains locked in a Victorian time warp.

A 10,000-strong British garrison town in the Anglo-Boer War of 1899-1902, it once played host to Randolph Churchill, Cecil Rhodes and the Sultan of Zanzibar.

It is now dominated by the Lord Milner Hotel where passengers can toss back a complimentary sherry and take a brief bus tour of the area.

The hotel is said to be populated by several ghosts including that of Kate, a 19-year-old Boer War nurse fond of playing cards with her patients. She died in mysterious circumstances and can now be seen wandering the corridors at night shuffling a pack of cards – or so they say.

Back on board, we return to the serenity of our cabin where my wife barricades herself in the bathroom, opens the blinds and enjoys the luxury of a long bath while taking in the views of the desert and distant mountain ranges.

I stretch back in the armchair, put up my feet and think how far removed rail travel is from the combined stress of airports and flying.

That evening the big moment arrives and the jacket is hauled from the suitcase in which it had by now travelled from Australia to South Africa, Zimbabwe, Botswana, Namibia and then back to Cape Town.

It is remarkably crease-free and with my wife resplendent in an elegant cocktail dress we proceed to the Club Car for pre-dinner drinks.

We tell each other we look wonderful and just maybe we do.

Dinner is, as promised, an elegant affair. The menu, while limited is more than adequate, the food very good, the wine list comprehensive and the service excellent.

I awake in the early hours to the steady, rhythmic motion of the carriage and immediately fall back to sleep.

Breakfast can be served in your cabin but we take our muesli and poached eggs in the dining car.

We then retire to the observation car where we spend the morning watching the world glide by as the train weaves its way through the outskirts of Johannesburg’s 12.5 million strong sprawl before travelling on to Pretoria.

Jacket and dress once more consigned to their suitcases, we detrain shortly after midday and are taken to Castello di Monte.

This is a small, 5-star hotel on a hilltop in the ultra-exclusive suburb of Waterkloof with magnificent views over the city, a slice of Tuscany in South Africa which can be organised as part of the Blue Train package.

The Blue Train is a luxury, a side-bar indulgence to wider southern Africa travels. We choose to do it at the end of a three-week trip and it makes for the perfect conclusion. 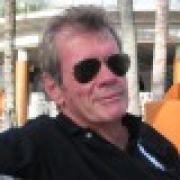 Mike O’Connor is a Brisbane-based travel writer and columnist. He’s travelled widely, mingled with famous people who don’t remember meeting him and loves a free lunch.