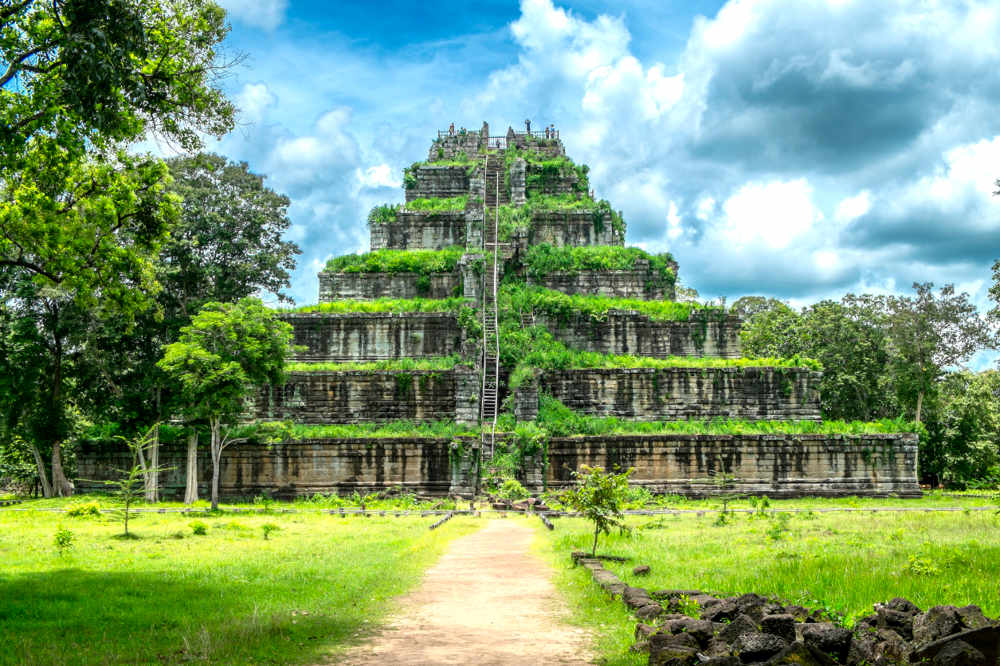 TRAVEL BLOG Beyond Angkor: Inside The Lost World Of Phnom Kulen

When I got to Phnom Kulen with my guide, Chanthorn Kong ('Chan'), and he had shown me the sacred river (with the serene faces of Hindu deities gazing up through water turned golden by sunlight) and the Reclining Buddha ("Please don’t write on the Buddha," said a polite sign that had been comprehensively ignored), I asked him: is it possible to see any of the new stuff that the laser technology has revealed? Chan said he didn’t know but would ask in one of the villages – and this was how we ended up on the backs of mopeds, zipping and slithering through the jungle on muddy tracks, bumping over tree roots and ducking under branches.

Occasionally we would cross a clearing of cashew nut trees and so vivid were the colours in the sudden sunlight that it felt like being dipped in a tin of green paint. These tracks and clearings took us to structures built 1,200 years ago, when Phnom Kulen was known as Mahendraparvata, the first capital of Cambodia’s Angkor civilisation.

Chan, who has shown thousands of tourists around Angkor Wat and the other temples of the Angkor Archaeological Park, had never been to these sites before and was left near-speechless. “I think this is what Angkor Wat must have been like in my grandfather’s time,” he murmured.

Phnom Kulen is a mountainous plateau of hermits and herbs, and secret places lost in deep jungle, that lies 40 kilometres northeast of Angkor Wat. A former stronghold of the Khmer Rouge, it is about 24 kilometres long by 10 wide, and nine villages nestle in the tropical forest that still covers much of it (though illegal logging and the planting of cashew nut trees are rapidly eating into the tree cover). The mountain is sacred to Buddhists and Hindus, and to Cambodians in general, for it was here that Jayavarman II is said to have founded the Khmer empire, which lasted from the 9th to the 15th Centuries.

Plenty of people (pilgrims, locals, a few foreigners) visit from Siem Reap, dutifully walking around the same roster of attractions: the so-called River of a Thousand Lingas (9th Century carvings on the sandstone bed of a river), a colossal Reclining Buddha, a waterfall where people swim. What most don’t realise is that out there in the jungle lie temples and relics that in their exotic ruination (if not their dimensions) give Angkor Wat a run for its money.

In the past few years archaeologists studying the Khmer era have used laser scanners mounted on helicopter skids to make significant discoveries. This new technology can penetrate thick jungle to reveal the contours of man-made structures – and what has shown up across the forested plateau of Phnom Kulen has got the boffins-with-trowels very excited.

The existence of a handful of temples was well known, but it now seems that Phnom Kulen was far larger than previously thought, a sprawling metropolis of temples, religious carvings and hydraulic structures. My Rough Guide averred that “none of [the archaeological sites] can be visited due to the lack of roads and the danger of landmines”, but that’s not quite true.

The jungle covering the plateau is intercut by narrow trails known to people who live here (they also know which areas have yet to be cleared of the landmines left by the Khmer Rouge). To visit the remote parts of Phnom Kulen responsibly it’s possible, and advisable, to book ahead but, acting on the spot, we hitched lifts on the back of a couple of Honda 90s ridden by a villager called Sean and his mate.

Off we whizzed, in a blur of dappled foliage, our first stop (apart from an inscribed stela) being a temple discovered just a couple of years ago by means of that new airborne technology. All you could see was a section of raised forest floor and, assuming this was all Sean would show us, I consoled myself with the thought that at least the bike ride had been fun.

But Sean was just getting started. In the course of the next two hours we visited three temples (brick and sandstone towers with bushy eyebrows of vegetation), a rock shelter covered in carvings and inscriptions, and a place called Sra Damrei, where sandstone rocks have been sculpted into a life-size elephant and lions.

At one point we even arrived at the hermitage of a young monk who was swinging in a hammock beneath a tin roof. His hermitical duties did not seem too onerous – he meditated in the bat cave behind his dwelling, but only on full moon days.

Chan was bowled over by our secret itinerary on Phnom Kulen. “After 15 years as a guide, you are my first client who comes to these places,” he said.

There is a simple reason for this. The Angkor Archaeological Park acts like a magnet for visitors to Cambodia, drawing them in and leaving them little time to venture farther afield (similarly, Machu Picchu monopolises the tourist experience in Peru).

Temple tips: Angkor Wat – How To Beat The Crowds

But 2016 is the time to go beyond the stellar triumvirate of Angkor Wat, Angkor Thom and Ta Prohm. Not only is current archaeological research, with the aid of the new 3D mapping technology, enlarging our knowledge of the Khmer empire and enriching visits to such places as Phnom Kulen, but a Khmer temple on the Cambodian-Thai border that the British Foreign Office advised against visiting has now been declared safe.

Preah Vihear is about 225 kilometres northeast of Siem Reap and – as well as being a haunting place in its own right – lies at the end of a route that takes visitors past other neglected masterpieces of Khmer temple culture. From the plain 610 metres below, the enclosures of Preah Vihear rise like stone hackles along a ridge of the Dangrek Mountains.

The temple was fought over in the civil war and later Cambodia and Thailand disputed ownership. But a truce has been in place since 2013, when Cambodia was given jurisdiction by the International Court of Justice in The Hague and the Foreign Office declared the temple safe to visit last year.

There was still a whiff of belligerence about it. “I have pride to be born Khmer,” said a sign pointedly at the entrance to the site, and sandbagged bunkers were dotted around.

Western visitors were sufficiently uncommon for me to attract curious stares from the few Cambodian tourists, but there were smiles, too, as I made my way through rising courtyards to the climax of any visit, a rocky headland where baby macaque monkeys teetered nonchalantly.

Below their tiny pink feet a sheer drop swept down into a 1:1 scale map of Cambodia’s northern plains. Out there in the blue afternoon haze were temples that had sent jolts of wonder through me on the way up to the Thai border the day before.

For old stones are not just dead things, they can be defiant and poignant. Suffused in an insect hum, Beng Mealea was a heap of ruined grandeur.

Trees with space-rocket fins blasted up through rubble, the branches of creepers and strangler figs penetrated the walls like stitches through fabric. “Most of the temples were destroyed by nature,” Chan said before adding, “and, later on during the war, by looting.”

Throughout Cambodia’s temples there have been mass decapitations of statuary. The heads of Buddhas, dancing women, cobras, lions and much else have been sold to the four corners.

Temple precincts have been sown with mines that continue to shatter people’s lives – at Beng Mealea we crossed the site by means of boardwalks that were installed not merely for ease of access. And yet the spirit of such places has survived and even intensified.

At Angkor Wat, for all its monumental perfection, that spirit can be hard to tune into. The experience has been regularised – where to stand to get the picture of all five towers reflected in one of the pools, and so on – and the guides’ commentaries, even the excellent Chan’s, are made mechanical by years of repetition.

At places such as Beng Mealea your emotions and imagination are liable to run as wild as the undergrowth. Want to know how European adventurers felt when they first saw Angkor? Pause here with the cicadas dinning in your ears and you will gain a good idea.

My most intense moment came at Prasat Thom, one of the temples of the Koh Ker complex northeast of Beng Mealea, on the road to the border. I turned a corner, stepping gingerly among rubble, peered along a roofless corridor of jumbled pillars – and blinked, as cartoon characters do.

What I saw, in the sunny clearing beyond, was a triangular structure as tall as a block of flats, built in layers, jungly vegetation spilling over each ledge like rows of hanging baskets. What was it doing here, this refugee from Mesoamerica?

Who knew? And yet it was – indisputably, magnificently – what it was. A pyramid.

This article was written by Nigel Richardson from The Daily Telegraph and was legally licensed through the NewsCred publisher network.

San Francisco Vs Santa Clara: A Tailgate Of 2 Cities