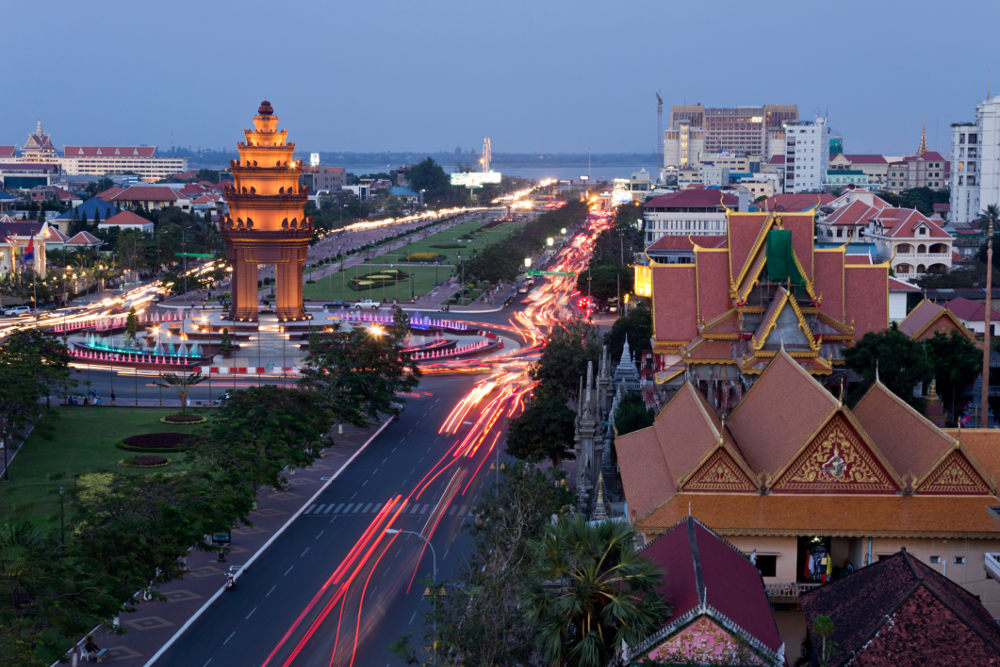 Cambodia's capital city of Phnom Penh is undergoing a staggering period of development 40 years after the communist Khmer Rouge regime took over the city and forced thousands to evacuate to rural Cambodia in its brutal campaign to create an agrarian-based society.

Today, the citizens of Phnom Penh are still recovering from the devastation of the past while a stylish regional capital comes into its own.

Dilapidated structures are being bought, torn down and replaced with shiny high-rises. High-end restaurants featuring Khmer and Western-style cuisine fight for space alongside street vendors and busy cafes while rooftop bars are packed at night.

The Tuol Sleng Genocide Museum, also known as S-21, is where the Khmer Rouge tortured and brutalized an estimated 17,000 Cambodians before they were executed.

Located in the southern portion of the city in a nondescript neighbourhood, Tuol Sleng was a high school before becoming a prison. With the recent 40th anniversary of the regime taking power in 1975, a new memorial dedicated to the victims was installed in March.

In addition to visiting Tuol Sleng, the Killing Fields of Choeung Ek is a must-see. Located about 30 minutes outside of Phnom Penh by tuk-tuk — the ubiquitous three-wheeled taxis — the site is where Cambodians from S-21 were sent to be executed from 1975 to 1979.

Pieces of skull and bone can still be found throughout the site, which contains numerous mass graves. A haunting but informative audio tour available in several languages provides historical context.

Within the city proper, the National Museum of Cambodia houses sculpture, pottery and other pieces ranging from prehistoric times to the Angkorian period (9th to 15th centuries). After touring the museum, head to the courtyard garden for views of the museum buildings, which were inspired by Khmer temples.

Just down the street is the Royal Palace, official residence of King Norodom Sihamoni. Full of Khmer architectural elements including stupas and towering spires, the palace complex includes Preah Vihear Preah Keo Morakot, or Silver Pagoda, the royal temple with Buddhas made of gold, silver and emeralds. More than 5,000 silver tiles cover the temple floor.

Cambodia's famous site, Angkor Wat, is in Angkor Archaeological Park in Siem Reap, about six hours by bus or taxi from the capital or a 45-minute flight.

Combine with nearby Laos. Southern Laos: Time Out In The 4,000 Islands

Accommodation ranges from dorm-style hostels to small boutiques to 5-star luxury resorts. The spectacular Raffles Hotel Le Royal has all the amenities — swimming pools, bar, spa, restaurants — as well a distinctive history: Foreign journalists stayed here while covering the civil war back in the 1970s.

Cambodia uses the US dollar as well as the riel. Anything less than a dollar must be paid for in riel. One US dollar (A$1.40) equals 4,000 riels at most places, though some shops use the official exchange rate, which is slightly higher.

Always carry small bills. Though some higher-end establishments may accept credit cards, most places will not. Streets vendors, markets and moto or tuk-tuk drivers will only accept cash.

Phnom Penh can get hot and humid during the dry season (November to April) and air conditioning is considered a luxury in many corners, so prepare to sweat. Drink lots of water. Temperatures dip in the wet season (May to October) and are coolest in December and January.

If visiting a temple, remove shoes and hats before entering the pagoda. At the Silver Pagoda on the Royal Palace grounds, men are asked to wear long trousers while women should cover their shoulders and wear long trousers or a long skirt.

Non-locals may be targeted by aggressive street vendors, beggars and tuk-tuk drivers. If not interested, firmly say no thank you or ignore them. If you do hire a tuk-tuk, settle on a price beforehand.

Tuol Tom Poung Market, commonly known as the Russian Market among expats and visitors, teems with vendors selling everything from journals, DVDs and jewelry to luggage and clothes. Make sure to haggle: Some of the name-brand merchandise is (obviously) fake. Food vendors selling local dishes, coffee, tea and fresh fruit smoothies are also located within the market.

Located a few blocks from the grand Independence Monument, Street 308 has been refashioned from a quiet lane into a popular area for nightlife with trendy restaurants and bars.

Head to the hole-in-the-wall Red Bar to sip wine or meander down a nearby tiny alley to get to Meat and Drink, a snug, modern eatery serving wraps, salads and burgers.

For a different view of the city, head to the Riverside area, located along the Tonle Sap River, to sip cocktails at the Foreign Correspondents Club. The cocktails are a bit pricier than in other areas in the city, but the view makes it worthwhile.

This article was written by Kristi Eaton from The Associated Press and was legally licensed through the NewsCred publisher network.

The Best Tickets In Las Vegas