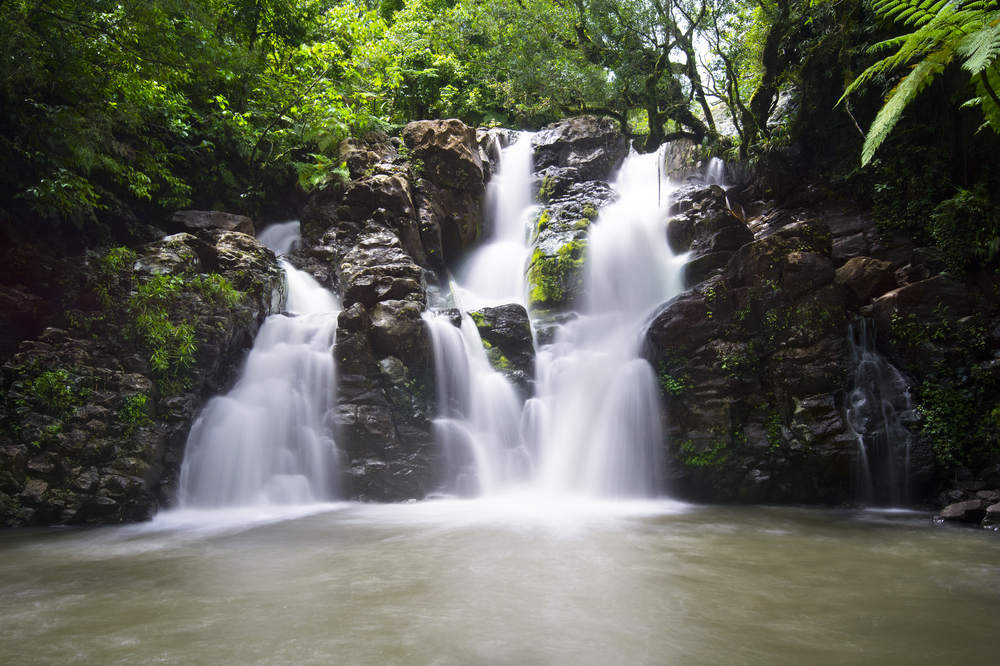 Alexander, the ship’s Russian doctor, poked his head out of his cabin like a tortoise sniffing the weather, uttered a lugubrious “I don’t think you’ll be going anywhere today”, and retreated back into his shell. Outside, the ocean raged beneath a leaden sky. Nobody had mentioned this was cyclone season – not ideal conditions for a cruise through the supposedly cerulean waters of the South Pacific.

But we were lucky. After four days of downpour, and sodden excursions ashore – during which everyone managed to remain remarkably cheerful – the skies finally cleared and the sun regained its dominion, with renewed determination to scorch us to a crisp. The South Pacific is one of those magical places whose very mention will induce coos of delight and envy.

It conjures images of deserted islands, dusky maidens, coconuts aplenty and a riot of colourful flora – not to mention a vibrant underwater world bordered by those picture-postcard powdery beaches. But those islands easily accessible by air, I discovered, evince little of this charm. Tahiti, for example, where tourism has fallen by 60 per cent, seemed shabby and depressed – little more than a springboard to the promised paradise.

For the best of the South Pacific, you need to venture to remote islands, virtually inaccessible without your own boat, or sea plane. And therein lies the advantage of a cruise; not any old cruise, mind, but one on a small ship, which can navigate where its larger siblings may not, and land its passengers quickly and easily on the most deserted shores. The Caledonian Sky is one such ship, her 57 spacious and luxurious cabins occupied, on this trip, by just 90 passengers – hale and gung-ho 60 and 70-year-olds, in the main – ministered to by an exceptional Filipino staff.

For two weeks we encountered no other vessel at sea, and many islands we visited had not seen a passenger ship for two years. The itinerary was scheduled to take us from Tahiti to Fiji in a leisurely, 15-day passage via the Society Islands, Cook Islands, Niue and Tonga, to coral atolls and lushly forested volcanic isles, seen to best advantage against the sun’s flamboyant dawn-and-dusk livery. Almost daily, we would anchor just beyond the encircling reefs, board the Zodiacs and negotiate breakers over the corals to enter lagoons of the most unimaginable turquoise, to be greeted ashore by the blowing of conch shells, gifts of intricately woven garlands of fragrant gardenias and hibiscus, serenades of ukuleles and drums – and yes, Gauguinesque lovelies in grass skirts and bras of coconut shells.

Thereafter, we would divide into jeeps, pickups or wonderful wooden, windowless buses, to bump over unmade roads to wherever we were bound. It is 240 years since Captain James Cook – on his second voyage to these latitudes in search of the Antarctic continent – discovered the Friendly Islands (Tonga) and the group of 15 islands that now bears his name. Among the latter, we visited Atiu, and the small beach where Cook’s men landed in 1773.

Today, Atiu boasts a tiny airstrip, whose only formality is a small notice in the waiting hut: “Voluntary Security Check. Would passengers please hand their AK47s, bazookas, grenades, explosives and nukes to the Captain before boarding the aircraft.”

There’s further evidence of progress in the supplanting of cannibalism by the Eucharist, thanks to the zeal of the 19th Century missionaries who survived the cauldron to found the Cook Islands Christian Church. Otherwise, little has changed. Cook himself is commemorated in the local beer, Nathaniel Dance’s formal portrait of the explorer superimposed on a palm-fringed beach, under the moniker 'Cooks Darkie'.

Among so many islands with intractable names – those of Niuatoputapu and Niuafo’ou, after a couple of bibulous evenings on deck dining beneath the stars, fade from memory faster than they can be pronounced – there were many memorable experiences. Raiatea, where we arrived with an escort of spinner dolphins and to the wafting fragrance of vanilla, was the first of them. Dubbed the Sacred Isle, it is considered the cultural and religious capital of Polynesia, witnessed by the importance of its well-preserved marae – religious sites of coral and volcanic stone, where human sacrifices once took place.

Here, our local guide, Suzanna, her hair wreathed in flowers, stood in the shade of a breadfruit tree to recite creation myths of the gods, as passed down through generations, while I surreptitiously picked mangoes and passionfruit fresh from the neighbouring trees. This little island, had I but known, would also offer the trip’s best opportunity for retail therapy, in the form of a family-run Pinctada margaritifera farm, producing the luscious Tahitian pearls for which the South Pacific is renowned.

A crusty Frenchman demonstrated the technique, whereby a six-millimetre spherical nucleus is implanted into the unfortunate oyster’s gonad, while the mantle – the 'lip' which produces the shell’s nacreous lining – from a sacrificial donor is cut and grafted around it. The results, after 18 months, could be seen in the little shack that serves as a shop: pearls worth thousands of dollars, ranging from the creamiest champagnes and coppers to the shiniest iridescent blacks, imparting a whole new, glamorous meaning to 'farm produce'.

Another set of South Pacific lovelies: Embrace The Island Lifestyle In Hawaii

Tahiti's wild side: More Than A Honeymoon Hot Spot

A bit more hands-on: Sailing By The Stars In The Cook Islands

In Taveuni, while the 'birders' went off in search of the endemic orange dove and rare silk tail, I walked through steaming tropical forests to an 18-metre waterfall whose icy waters were the perfect antidote to the wilting heat. In Vanua Levu, an entire village of 42 bure (huts) turned out in Sunday best to welcome us with a traditional yaqona ceremony headed by the village chief. I watched, fearful of dysentery, as a mildly narcotic blend of ground kava root and water was solemnly strained through a filthy cloth, to be passed around the assembled company amid ritual clapping and chanting – an offering, alas, one may not refuse.

There followed less hazardous masterclasses in weaving mats from pandanus leaves and making decorative bark cloth, known as tapa, and the day concluded with performances of tribal songs, meke war dances and home-made cakes of taro and cassava: a village fete, a la Melanesie.

Crashing 2.5-metre waves, sadly, precluded safe landing on those 'N' islands in the Kingdom of Tonga. But compensation materialised, with an unscheduled stop at Levuka, Fiji’s capital for some 50 years, on Ovalau. A town of weathered wooden colonial houses founded in the 1830s by one David Whippy – “a Yankee ship deserter”, according to the museum – as a trading post in turtle shells and beche-de-mer, Levuka soon flourished to acquire a lawless reputation, its trail of empty gin bottles tempting sea captains into port.

Today, it retains all the seedy appeal of an Alaskan gold-rush settlement, along with its spirit of enterprise. Where else would you be offered the convenience of 'Handicrafts and Funeral Services' under a single roof?

Back on board, our expedition crew unravelled the mysteries of anthropology, geology, ornithology and the denizens of the deep during informative and entertaining lectures. If, in the skies above, we were entertained by wheeling frigates, fairy terns and boobies, the underwater universe presented the greatest thrill. Most days yielded opportunities for snorkelling above reefs rich in luminescent corals, majestic emperor angel fish, comical anemone fish, shimmering parrot fish, improbable box fish, and more.

With the expert guidance of our marine biologist, I discovered fire corals, a pair of mating octopuses, Christmas tree worms like colourful bottlebrushes, 1.5-metre reef sharks, and avoided the attentions of a sea krait – 50 times deadlier than a cobra, and whose venom has no known antidote. I’m glad I didn’t know that at the time.

One day, we came across a newly formed sandbar at Beveridge Reef, on which a few of us made the first human footprints. For all the beauty and adventures of this journey, there was nothing quite so humbling as to watch the tide rise to meet the sunset, and engulf the tiny island around me into a boundless expanse of blue.

This article was written by Teresa Levonian Cole from The Daily Telegraph and was legally licensed through the NewsCred publisher network.

A Descent Into Waitomo's Lost World