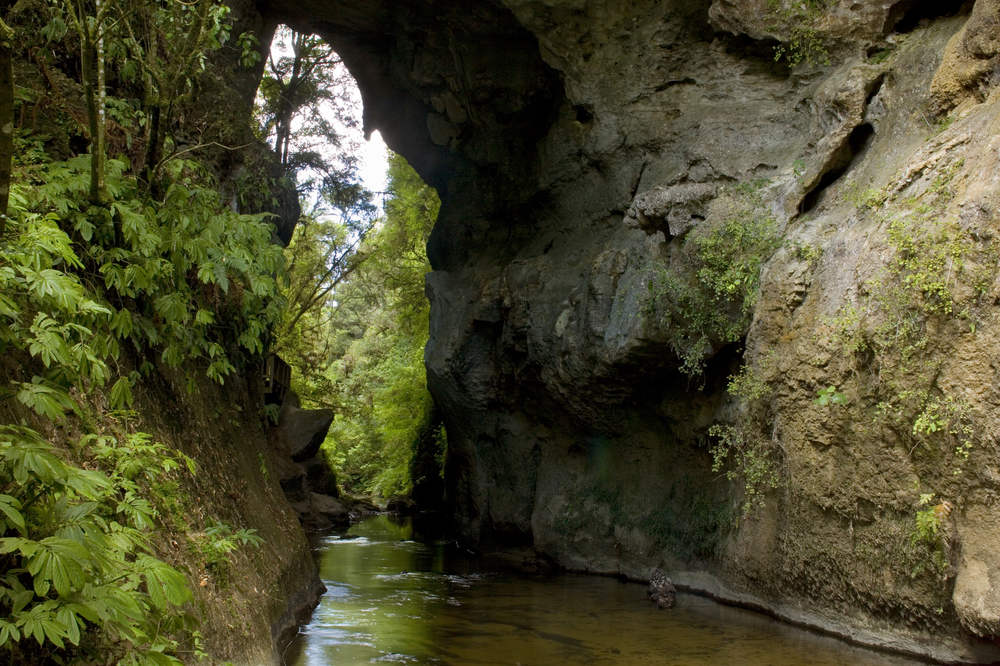 A Descent Into Waitomo's Lost World

I’d underestimated the weight of 100 metres of climbing rope. Leaning back from a steel mesh platform, I had to lift the rope with one hand to gain enough slack to drop into my harness and hang freely over the rift. The effort took my mind from the slight lurch when my feet left the edge.

Swinging below the rail, I fed the rope with white knuckles to begin my descent. As I drifted in a slow, lazy spin and relaxed into suspension, I got my first good look at the Lost World. Hidden among exotic woodland and guarded only by sheep, the Lost World cave entrance is a narrow crack in the earth.

Beneath lies an underground gorge pierced open by shafts of sunlight. Woodland canopy closes overhead while the slimy vertical walls, shrouded in patches of dark ferns, drop away to the thin silver ribbon of the river in the mist far below. The water flowed out of the darkness, our destination, at the end of the cave and through this brief patch of sun before vanishing back into the rocks below my feet.

My group of four descended together, pausing for pictures and twirling to soak up the view. Growing in confidence, we learned to use our boots on the rope for a faster descent, sliding downwards while birds flitted by. We slowed as we reached the end to prolong the wonder of swinging in the sunlight deep below the surface.

Finally we dropped with a crunch on to the mossy stones below and stretched feeling back into our legs. It’s an astonishing entrance, a dramatic split of rock, green and light. Now, to return to the surface, we had to leave it behind.

We began tracking noisy black water upstream, sticking to the ever-narrowing trail of sunlight as we clambered over boulders studded with the remains of ancient sealife, repeatedly turning to enjoy the diminishing view. We moved deeper into the cave, deeper into shadow, using head torches now to pick out our footing, silhouetted against the brightness we were leaving.

An hour underground we began to encounter other glows in the dark, the tiny green dots of the glowworms, hundreds clustered on the walls and ceiling. These inch-long cannibalistic larvae dangle strands of gossamer from the roof of the caves to trap other insects. Appearing in clusters throughout, their bioluminescent faeces provides the tiny green glow, creating sheets of stars across the cave ceilings. They’re beautiful.

We switched off our lights and sat together nibbling chocolate under these neon stars.

We arrived in the caves together but each ascended alone. The exit was up a ladder, 40 metres of wet narrow rungs which each took in turn. Last to go up, I sat and watched the final bobbing light vanish slowly towards the surface.

Given my signal, I started my dark and silent solo climb, the focus now on inner and physical strength, step after step to the exit far above. Safely secured, and guided from far above, it was still a long and testing ascent and an aching triumph on reaching the top. And then up and out, back into the green Waitomo countryside, greeted by birdsong and lambs.

Try swimming in a cave: Forget The Pool & Go Wild Instead

While you're on the North Island: 8 Great Auckland Wine Experiences

Take a different kind of plunge: Top 10 Bungee Jumps In The World

The Waitomo area on New Zealand's North Island is named from the Maori words ‘Wai’ meaning water and ‘tomo’ for hole. Caving tourism has been going on here for more than a century. There are believed to be hundreds of kilometres of caves under the land around Waitomo and companies have sprung up to offer tours and adventures to take advantage of these natural formations and the famed glowing bugs.

The other great lure of the Waitomo caves is the black water, the underground rivers you can drift along or splash through down dark, twisting tunnels. Geared up in padded wetsuit and helmet, my adventure started with a 35-metre rappel through a small, muddy hole in the hillside. Dropping from the light, I bounced down the shaft of wet rock to join the group below, only to be clipped to a zip-line and sent speeding further into the black, convinced I was about to be thrown into the noisy water.

Recovering and lit, we were handed rubber rings, our vessels for the next stage of the trip. After a jump and a splash into the river, we climbed in our rings and slowly drifted through the high tunnels in a bouncing chain. This was a wonderful way to see the glowworms, laying back, gazing up and floating gently along in silence beneath the constellations.

There are several underground tubing expeditions available from a range of companies. I tried the five-hour Black Abyss tour from the Legendary Black Water Rafting Co. There are also a range of more sedate tours available to experience the caves and glow worms on foot or in a guided boat.

There are a range of scenic walks in the area to enjoy through the local wildlife reserves. Some nearby natural attractions can be easily reached by paths from the road without going underground, including the collapsed cave system at the Mangapahoe Natural Bridge and the spectacular Marokopa falls. Lord of the Rings fans can enjoy visiting the Hobbiton set, which is just over a few hills, though the whole surrounding landscape looks like The Shire.

This article was written by Ben Hazell from The Daily Telegraph and was legally licensed through the NewsCred publisher network.