Taste Your Way Through Morocco

Aromatic, spicy, varied and best served piping hot, Moroccan cuisine is many things, but it’s definitely not bland. Straddling multiple worlds, tastes and flavours, the culinary landscape of this North African country is as diverse as its geography, with Mediterranean, Arabic and French influences complimenting a rich Berber and African palette. And like any good tajine, Morocco’s culinary landscape has been stewing away for ages – so you know it’s going to taste good! If Morocco features on your next itinerary, make sure these feature on your to-eat list. 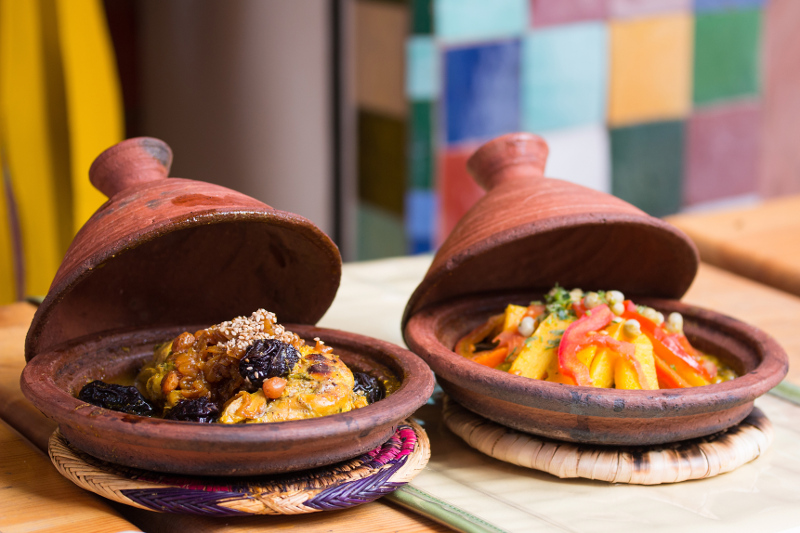 Next to couscous, tajine is Morocco’s other culinary star, and you’ll find the classic dish offered pretty much anywhere you go. The name of the dish refers to the conical clay cooking vessel that allows the meat (or chicken or fish or lamb) to stay moist throughout the cooking process, literally falling off the bone when served. Combined with veggies, dried fruits (such as prunes, dates or raisins), olives and lots of spices (such as cinnamon, saffron, ginger, turmeric, cumin and paprika), tajines are traditionally eaten with your hands, using chunks of bread to soak up the delicious juices. There are about a dozen different types of tajines to try, but popular ones include emshmel (chicken, olives and citrus fruits), kefta (meatballs in an egg and tomato sauce) and mrouzia (lamb, raisins and almonds). 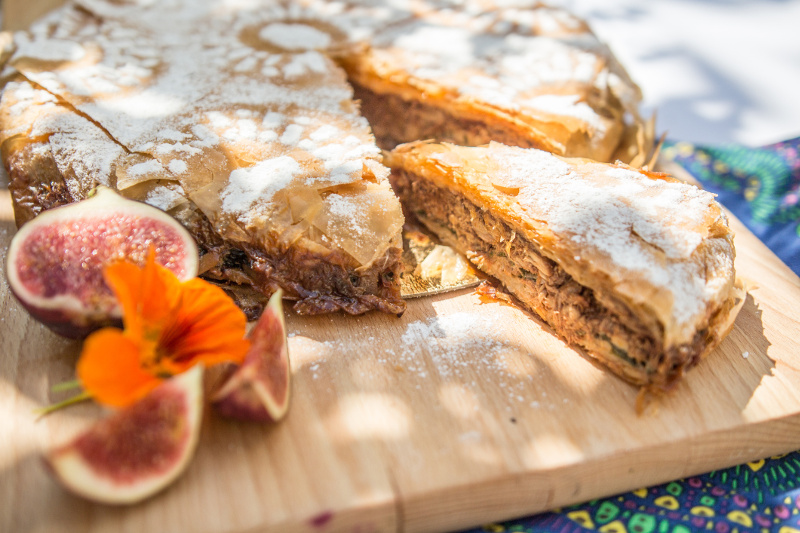 Blurring the line between sweet and savoury, pastilla is a traditional Moroccan pie dish that blends together spiced pigeon meat (or chicken), almonds, and eggs in a base, and topped off with thin layers of pastry topped with icing sugar and cinnamon.

Get your snow or surf fix in one day in Morocco!: Five Ski Resorts With Both Ski and Mountains

Morocco made it onto this list too: The World's Most Romantic Hotels 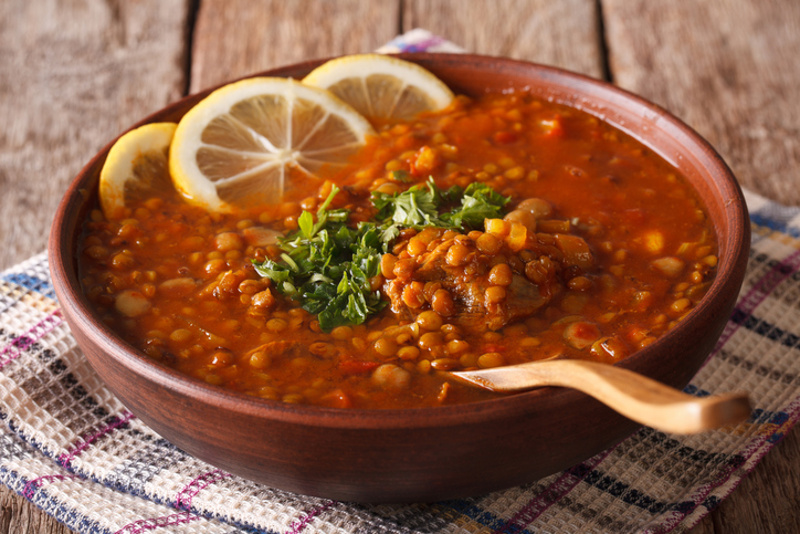 Harira is considered the National Soup of Morocco

Made from tomatoes, lentils, chickpeas and lamb, harira is a thick soup usually eaten before a main, but it’s also a delicious snack – accompanied with bread, it’s very filling. Harira also has a religious significance: during the month of Ramadan, Moroccans break their fast by slurping their way through a bowl of the stuff at sunset each day, usually with milk and dates. 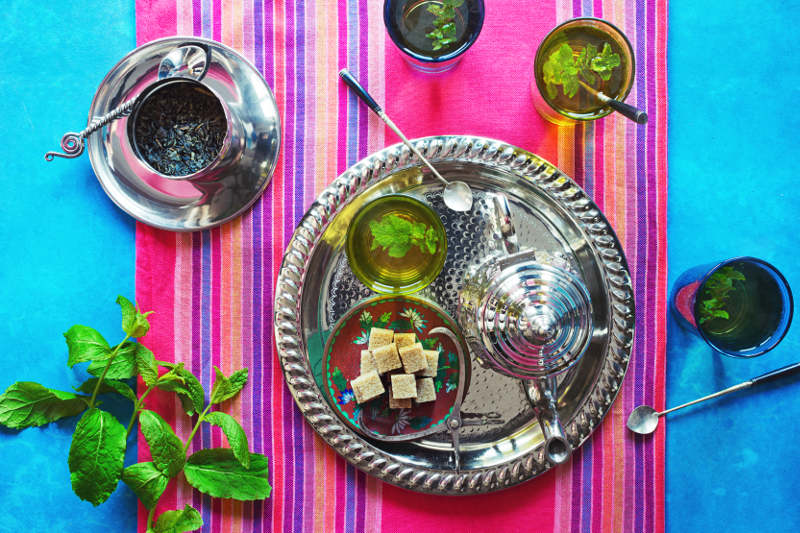 According to Moroccan tradition, the higher you pour the tea, the more respect you have for your guest

Also known as Moroccan whiskey, mint tea pretty much fuels this nation of 30 million, and it’s extremely common to see locals nursing a pot of the concoction at cafes and restaurants from the Sahara to the Atlas Mountains to the Atlantic Coast – sometimes for hours. Like the Japanese, Moroccans treat drinking tea (atai in Arabic) as something of an art form, and the preparation and pouring (from a height) of the brew is just as important as the quality of the leaves. Moroccans also love their tea sweet, hence the mountains of sugar cubes that accompany every pot. Despite its name, Moroccan mint tea is actually made from a base of green tea (rich in anti-oxidants) with fresh sprigs of mint thrown in for taste and colour. 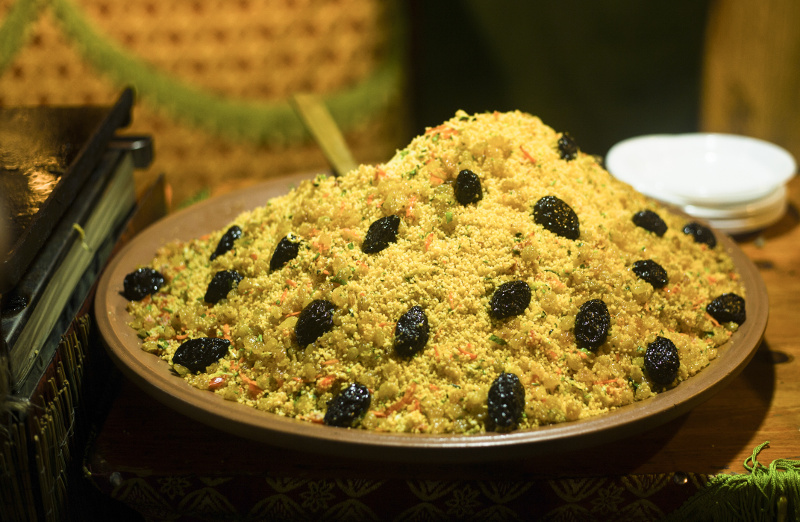 Couscous in its native habitat

Synonymous with Moroccan cuisine, couscous is the national dish of Morocco, and has been a staple food for the Berbers for centuries. Made from wheat semolina mixed with flour, sprinkled with water and rolled into small granules, couscous is usually served under meat or a vegetable stew. Traditionally, couscous is only ever eaten on Fridays (the holiest day of the week for Muslims) or on special occasions, such as weddings, funerals and at the end of Ramadan. But you won’t have any trouble finding it on the menu at most restaurants catering towards the tourist crowd all over Morocco. Note: couscous is extremely filling, so sharing a dish is recommended.