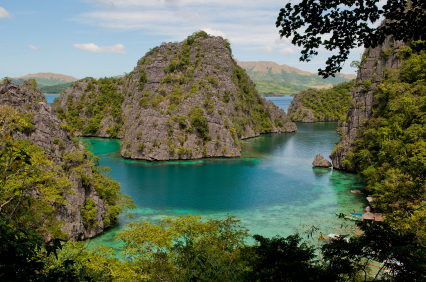 Top 5 Dive Sites around the Pacific

It's the ultimate way to see the ocean. Sink below the surface of the waves and enter a magical domain. The Pacific Ocean derives its namesake from the Latin expression "Mare Pacificum," meaning "peaceful sea." The sea might seem peaceful from above, but below - the ocean teems with life. Check out the Top 5 dive sites in the Pacific Ocean.

The Solomon's are composed of 922 islands and atolls, offering endless possibilities for diving. However, the best known dive sites in the Solomon Islands can be accessed from live-aboard itineraries in towns such as Munda and Gizo.

The Munda area offers a spectacular drop-off at Shark Point, where divers can observe Reef Sharks, Eagle Rays and large pelagics. A Japanese freighter wreck in the shallows also offers endless underwater sightseeing opportunities. Rainbow Passage is known for its coral gardens and a Gorgonian-covered wall.

The Solomon's offer an impressive line-up of underwater marine life wonders, spanning from the very small to the very large. On the outer reefs, large swirling schools of silvery masses dominate, from Jacks to tuna, mackerel and more. Sharks and other pelagics are ever-present on any given dive to complement the beauty of this amazing place.

The chain of volcanic islands that makes up Hawaii stretches more than 1,000 miles through the crystal-clear waters of the Pacific. Diving the Hawaiian Islands include stunning bottom formations, encrusted with corals, an abundance of colourful tropicals and the constant possibility of big animal encounters, including Humpback Whales, Sea Turtles, Reef Sharks, Pilot Whales and dolphins.

Along the entire South side of the island of Molokai lays the longest barrier reef in Hawaii. Seldom visited by divers, this natural sanctuary offers some of the best diving in the islands. Ni'ihau, located off the south-western coast of Kauai, is home to gigantic sea arches, the endangered Monk Seal, large pelagic fish and other rare species of fish.

Situated on the equator, 600 miles west of the coast of Ecuador, lie what are probably the most famous islands in the world. Espoused in the work of Charles Darwin, the Galapagos Islands have always been a magnet for biologists and travellers.

The islands that make up the South Pacific include Polynesia and Melanesia. Polynesia encompasses numerous island groups, including French Polynesia and Tonga. It is made up of scattered volcanic and coral land forms. Melanesia, which encompasses Fiji, New Caledonia, Vanuatu and the Solomon Islands, is composed of chains of large mountainous islands.

Some consider the Galapagos the premiere spot for seeing large marine fauna. When you dive the Galapagos Islands you will see pelagic species close to shore more frequently than any other dive site in the world.

With nearly 3000 hours of sunshine yearly, and perfect ocean visibility, French Polynesia is one of the world's greatest diving destinations offering three distinct zones to explore: the lagoon, a gigantic natural swimming pool with shallow waters, the ocean-side slope of the reef, offering a multicoloured world of coral; and the inlet which remains the place most likely to show high concentrations of any particular species.

Here you will find Manta Rays with wing spans of several metres, Napoleon Fish weighing over 35 kilograms, a large number of species of shark, and rarer still, Humpback Whales from August to October. You will also find a great variety of barracudas, dolphins and turtles when you dive Tahiti.

The warm water of the Philippines supports a rich diversity of marine life - the perfect place for diving. More than 7,000 islands of lush tropical greenery offer about 40,000 square kilometres of coral reefs teeming with a variety of marine life.

The numerous islands of the Philippines are home to several popular diving areas. Batangas, near Manila, has been a favourite for many years. Approximately 23 metres off Bagalangit Point lays a giant rock formation that looks like a roofless underwater amphitheatre. Moorish Idols, Parrot Fish, and the usual reef dwellers all cluster around divers. Puerto Galera is another popular diving spot.

There are two recommended dive sites at Escarceo Point, the Canyons and Shark Cave. The Canyons start off from the 'hole in the wall' at a shallow 40 feet descending to 90 feet where large pelagic fish are plentiful. The Shark Caves, a series of caves about 24 metres below, are so named because White Tip Reef Sharks breed and sleep in the dark crevices.