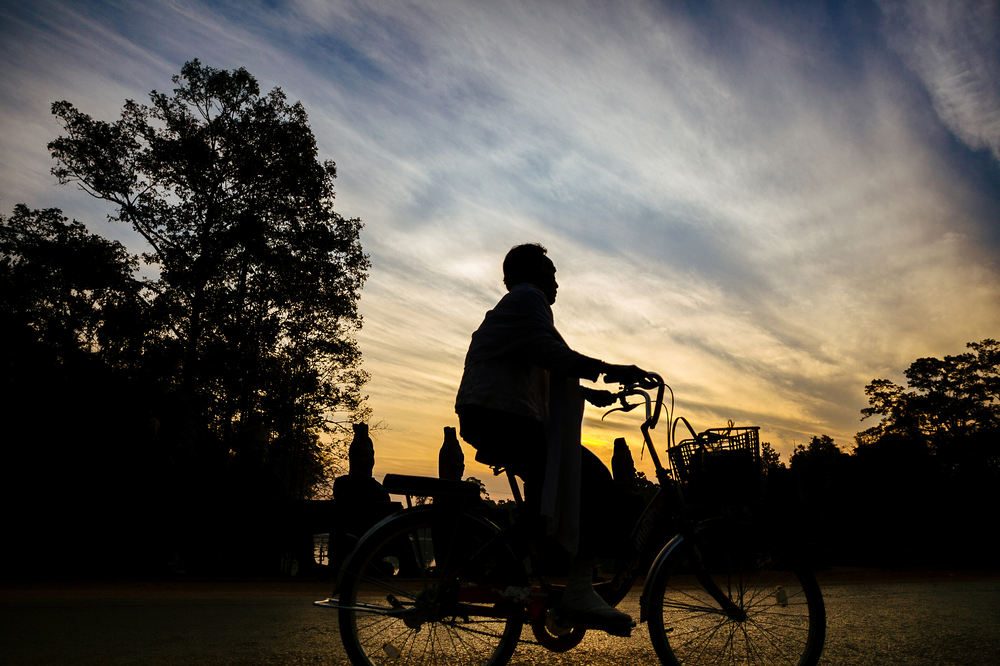 My father was the pacesetter. It was a role he was born to play – a retired sport and history teacher, and probably the most competitive man I know, he was never going to sit behind, at the back of the peloton. My sister and I settled into the roles of 'domestiques' – the worker bees, we liked to think, bringing food, water and energy gels to my mother and her great friend, Sue. And Sue, who five months ago did not even own a bicycle, found her niche as a sprinter. She was our Mark Cavendish – and as soon as the end was in sight, she was off, leaving the rest of us for dust. Team Sky may not have been too troubled by our split times. But with our ages ranging from 28 to 71, that was never the point. Plus, Bradley Wiggins never had to negotiate paths that would have made Indiana Jones’s eyes light up – bouncing by banana palms, around rice fields and twisty, temple-lined tracks.

We were cycling through Cambodia, heading for the border with Vietnam, on a 10-day journey that began in Siem Reap – home of Angkor Wat – and ended 565 kilometres later in Ho Chi Minh City, formerly known as Saigon. “Our philosophy is all about showing this country as it is,” said Hun Socheat, who founded the cycling company eight years ago. “And the best way is by bike – to interact with the people, and learn from them about our history.”

At busy periods – normally in the dry season, from October to February – Hun will have 100 people a month on his tours, many of them individuals, but many also on charity cycling trips. Some serious cyclists book bespoke trips, cycling flat out for 160 kilometres a day, with elite guides – many of them champion Cambodian racers. “We enjoy peace in our country now,” he said. “And we want to share that with our guests.” To make things easier, the five of us were accompanied by a van for our bags and an endlessly patient guide for each country. Softly spoken and smiling, Sonn, our man in Cambodia, brought our journey to life.

Now aged 39, he told how as a child he would hide in a hole with his mother and siblings as the Khmer Rouge rampaged through his village. He recalled how his father had come across a landmine in his village – “We dug a hole, filled it with wood, set fire to it and then ran as fast as we could,” he said, laughing. Phat, our charming minibus driver, told us how his uncle and best friend were killed by landmines – a grimly common fate in one of the most mined countries in the world. It made our pit stop at the excellent landmine museum outside Siem Reap all the more poignant, and Sonn’s tour of the Killing Fields even more sobering. “Where else in the world have the people in the space of 30 years been through two invasions from their neighbour, bombing by the Americans, genocide and civil war – yet still remain so amazingly friendly, open and welcoming?” said my mother.

Sonn first visited the huge Angkor complex in 1991 – when Khmer Rouge forces, despite the Vietnamese ousting Pol Pot in 1979, still roamed the region, terrorising the people. “There were only 10 people or so here then, and all local,” he chuckled, looking at the crowds of Koreans, Chinese, Americans and Europeans. “I was so scared because I thought the Khmer Rouge could come for us at any point.” He was denied an education under Pol Pot’s demented regime, which saw 1.7  million killed – many of them teachers, intellectuals, even people who wore glasses. And so he now spends his free time working for the Cambodian Countryside Foundation, alongside an American woman who runs the organisation from Washington DC, which supports three schools in the Siem Reap area with pens and paper, wells and latrines.

In the next few days, we saw much of the Cambodian countryside. Sonn led us far from the beaten track, where we rarely saw another Westerner – along narrow roads where women wove baskets under the trees, and through small settlements of traditional wooden Khmer homes, built on stilts, with the family cow and the cooking area housed in the shade underneath. The red, dusty routes were lined with bright pink bougainvillea, or flanked by ponds thick with water lilies and lotus flowers. We pedalled past innumerable Buddhist pagodas, their spires rising above the treetops, their gold and red decoration dazzling in the sun. It was a great way to meet locals. “I feel really important now,” said my mother, as she said hello to the hundredth child that morning – all of whom beamed, jumped up and down and excitedly yelled greetings on seeing the foreigners cycle past, stretching out their hands for us to high-five.

A Buddhist monk, chanting through a megaphone in Khmer to appeal to locals for offerings, made our Cambodian guide giggle as we rode past. “What did he say?” my sister asked. “He said: 'Look at all those funny foreigners on bikes – maybe they will make a donation.’ ” We didn’t know whether to be delighted or mortified that we’d been mocked by a monk. And it was all going perfectly until a Cambodian water buffalo blocked my path – and nearly pushed me into a paddy field. But then, as the rest of my family pedalled off ahead of me, chasing the departing sunrays of the day, I thought to myself: this isn’t such a bad rush-hour traffic jam to be stuck in, on a balmy February evening. Each day we rode between 30 and 90 kilometres and spent most evenings reviving ourselves with Angkor or Saigon beers, laughing at the events of the day – how Sue found herself upside down in a Cambodian briar patch; how Mum collapsed in hysterical laughter when she saw the toilet she was supposed to use – two logs, over a swamp, in full view of the village.

As we sadly said goodbye to Sonn at the Vietnamese border, our new guide, Sene, gave an equally riveting insight into his country. A former Buddhist monk – “My dad was a monk and told me I could never cope with it, so I proved him wrong” – Sene was the embodiment of the vibrant, confident new Vietnam. A canny businessman, the cheeky, lively 27-year-old had his own travel company, and worked as a contractor for various agencies. As we pedalled along, he told us about the history of his country, explaining the war to my sister and I, who both knew scant detail of what had happened. But he was a man looking to the future – ambitious to extend his business, and travel more extensively than the neighbouring nations he had already visited.

One night was spent in a Vietnamese government hotel, complete with a coterie of local officials. For my parents and Sue, with vivid memories of the Vietnam War, sitting down for dinner with green-uniformed Vietnamese military was something of a shock. Finally, having crossed the Mekong on ferries and cycled around the myriad islands that dotted the delta, we arrived in Ho Chi Minh City – boarding the bus for the final leg, to avoid dicing with death among the seven million mopeds that populate Vietnam’s largest city. As we dined under the stars in the courtyard of the elegant French colonial house which had been turned into a restaurant, we reflected on all we had seen – from the floating markets on the Mekong to the stilt villages of Tonle Sap lake; from the temples of Angkor to the tuk-tuks of Phnom Penh. My mother is already planning her next trip with the company – through Laos this time. It had been quite a ride. This article was written by Harriet Alexander from The Daily Telegraph and was legally licensed through the NewsCred publisher network.

Your Guide To The Fashion Capitals: Milan, New York & Paris