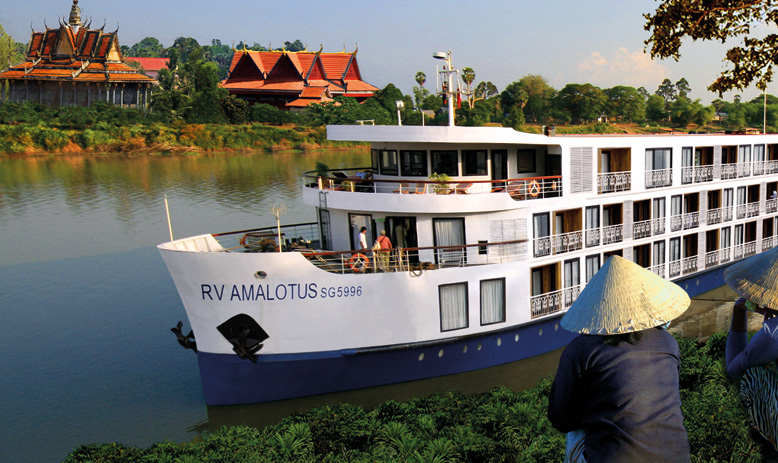 Discover the Marvels of the Mekong with APT River Cruises

Sitting on the deck of the RV AmaLotus with a refreshing glass of Angkor beer in hand, the wide, brown Mekong River stretches out before us. Even though we are a few days into our cruise, it’s hard to comprehend the size of one of Asia’s longest waterways. Often referred to as “the mighty Mekong”, the river begins in the high Tibetan Plateau and flows for more than 4,000km through China, Myanmar, Laos, Thailand, Cambodia and Vietnam before entering the South China Sea. As well as being a major trade route, it sustains the lives of around 60 million people. We feel privileged to meet some of them during our seven-night APT cruise through Vietnam and Cambodia.

The RV AmaLotus docked on the banks of the mighty Mekong. Photo: APT

I’d been inspired to visit the region after watching the SBS TV series Luke Nguyen’s Greater Mekong, in which the acclaimed Sydney chef cooks mouthwatering local dishes in his wok with the help of locals, usually amidst beautiful scenery. Nguyen was born in a refugee camp in Thailand after his parents escaped Vietnam during the war. Now an APT ambassador, he returns to their homeland twice a year to lead culinary tours. Our journey begins with a dinner on board featuring dishes served at his acclaimed Red Lantern restaurant. The three-course meal includes delicious roast duck and enoki mushroom rice-paper rolls and tiger prawns fried in young green rice flakes, tamarind and pineapple broth with prawns and beef.

The cruise also visits many of the places featured in his show, including Cai Be in Vietnam. The district is best known for its floating market, where women sit in small boats piled with their produce, including watermelon, mango and jackfruit. Each places the type of fruit they are selling on top of a bamboo pole. It feels a world away from the way we buy food at supermarkets back home in Australia. On land, we visit a factory-cum-souvenir shop where we see coconut milk being extracted and cooked in a large wok to make candy, meet a lady who spends her days making rice-paper rolls and drink snake wine that is poured from a glass jar in which the creature’s body had been fermenting for three months. 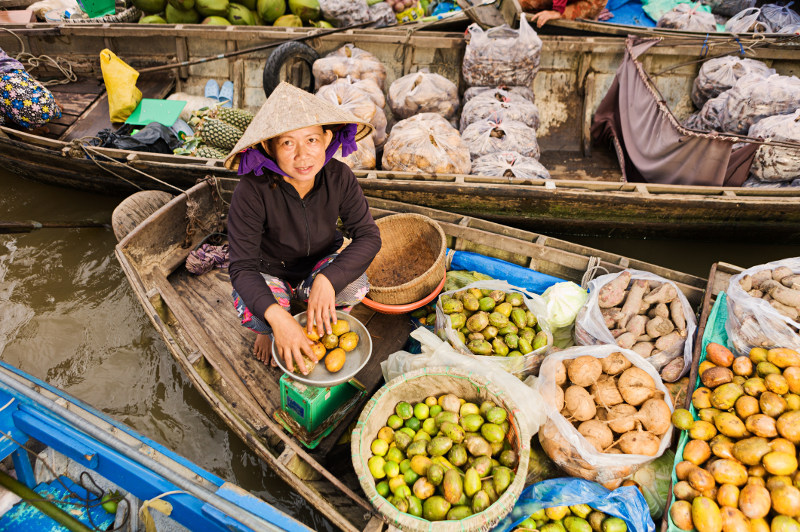 Cai Be is famous for its vibrant floating markets. Photo: Getty Images

That afternoon we stop in the quaint town of Sa Dec, where French writer Marguerite Duras met her Vietnamese-Chinese lover, Huynh Thuy Le. We visit the house which featured in the film The Lovers, based on her book about their illicit affair. I become intrigued by their story, and want to know more. Fortunately, there are several copies of the DVD on board the ship, and we borrow one to watch on the DVD player in our cabin that evening. (It’s far too raunchy to screen in the communal lounge.)

A different way to travel: Cycling Through Cambodia & Vietnam

Venture north for a change of pace: 48 Hours In Hanoi, Vietnam

Before boarding the recently refurbished 124-passenger ship, we spend a couple of days in Ho Chi Minh city, previously known as Saigon, where we can choose from a range of tours. I decide on a thrilling ride on the back of a motorbike through the chaotic streets, and a visit to the Cu Chi Tunnels. Originally built by villagers to hide from the French in 1947, the network was expanded during the Vietnam War, when up to 12,000 civilians and soldiers hid in them. We push our feelings of claustrophobia aside to crawl through the dark, narrow tunnels and get a glimpse of what life was like. But the highlight is meeting Huyh Van Chia, who lost an arm and an eye while fighting as a guerilla soldier during the war, and hearing his tales about his time living in the tunnels. 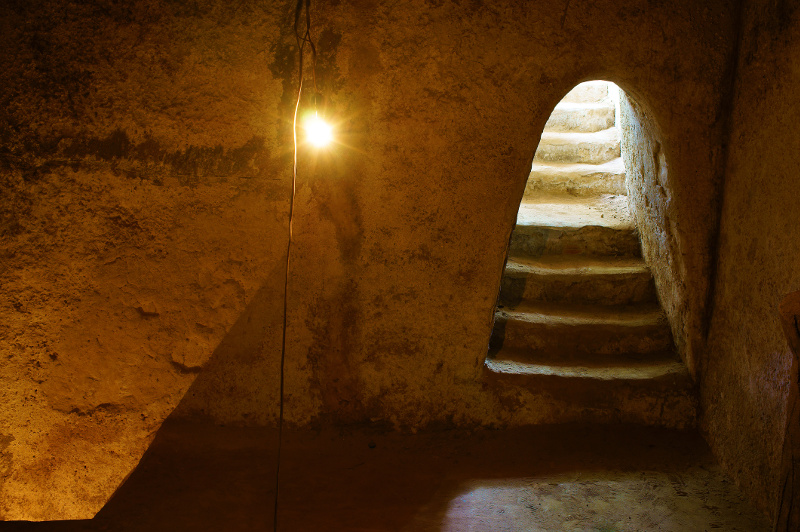 As the cruise progresses from Vietnam to Cambodia the industrial scenes along the river make way for a more tranquil rural setting. It seems a simpler life here. We see houses built of corrugated iron, wood and bamboo, watch playful children swimming and fishermen throwing nets into the water; and hear monks chanting from the gold pagodas which glint in the sunlight on the horizon.

In the capital, Phnom Penh, we see locusts, tarantulas and grasshoppers being sold for food at the markets, and visit the Choeung Ek Killing Fields, where 20,000 people were killed by the Khmer Rouge during the 1970s genocide. It is one of 380 mass graves throughout the country which hold the bodies of around two million people believed to have been killed as part of Pol Pot’s attempt to rid the country of its educated classes and create a pure, self-sufficient peasant society. Our guide and many of the ship’s crew lost family members during the extermination. Passengers, who mostly come from Australia, New Zealand, the United Kingdom and United States, listen intently as they reveal their personal stories back on the ship that night. Many of us have to wipe tears from our eyes. 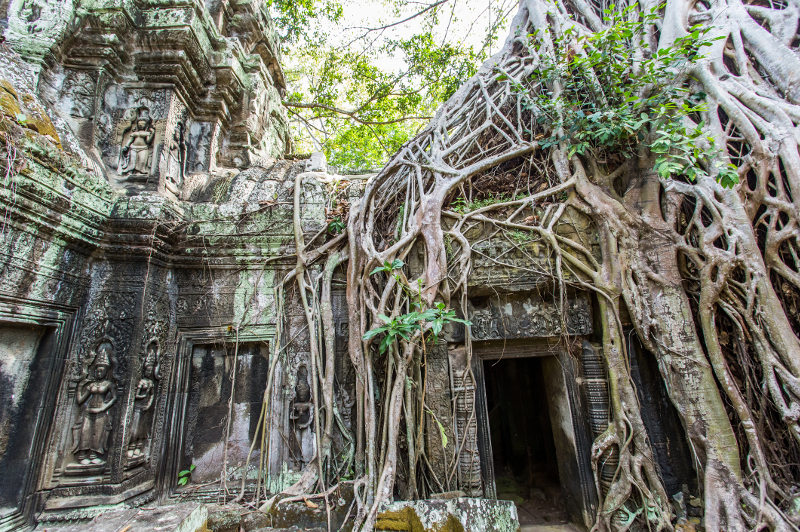 It’s sad to say goodbye when we disembark for our final destination, Siem Reap, where we visit the overgrown Ta Prohm temple, made famous by the Angelina Jolie film Tomb Raider, and watch the sun rise over Angkor Wat as we contemplate the myriad experiences of the past week. 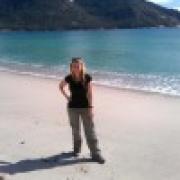 Angela Saurine is a freelance writer based in Sydney, Australia who specialises in travel, food, lifestyle and social issues. She was named Best Travel Writer in the 2012 AFTA National Travel Industry Awards, was a finalist for Best Responsible Tourism Story in the 2013 Australian Society of Travel Writers Awards and a finalist for Travel Photographer of the Year in the 2014 awards.