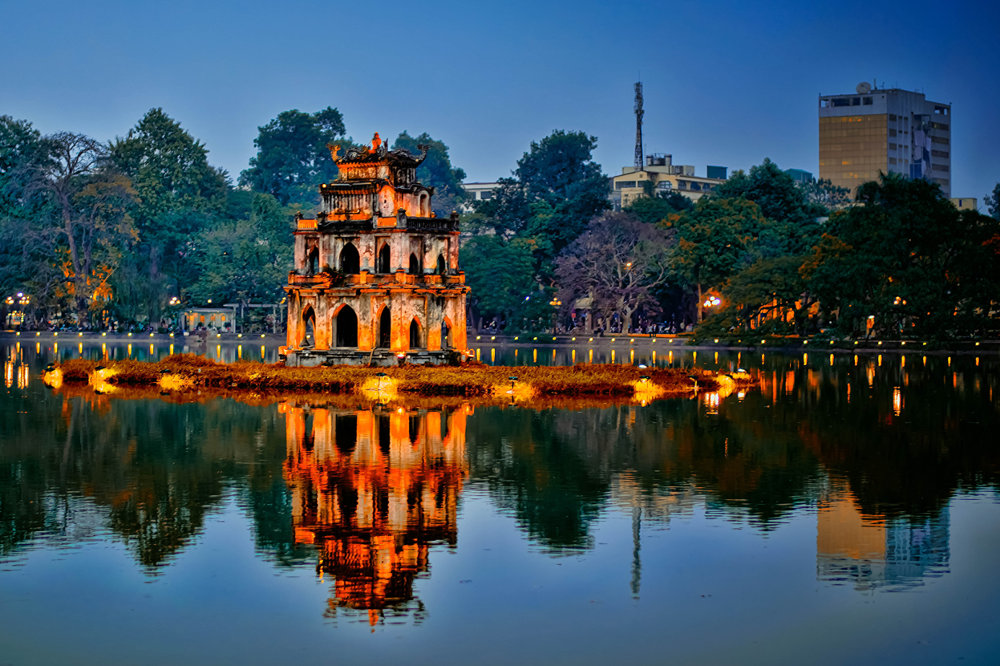 Vietnam's frenetic but charmingly low-rise capital is an increasingly popular stop-over for a range of Asian destinations.

Hanoi is also within easy reach of many of the country's geographical and cultural treats. Less than three hours to the east is Unesco-protected Halong Bay, with some 2,000 craggy karsts soaring from the emerald-green Gulf of Tonkin.

To the mountainous west are the terraced rice paddies and hill tribes of Sapa. Hanoi also offers great value for money.

The airport is 45 kilometres north of the city. Bus No 7 departs from outside the terminal every 20 minutes, between 5am and 10pm, and terminates an hour later at the central Kim Ma bus station on Pho Giang Vo. A one-way ticket costs only 5,000 Vietnamese Dong (A30 cents).

A taxi to the city centre costs 160,000 VND ($10 AUD). Journey time is around 40 minutes. Those arriving by train from elsewhere in Vietnam will pull into Hanoi's central station on Le Duan Street.

The name Hanoi roughly translates as 'City in a Bend of the River'. It is located on the banks of the Song Hong ('Red River') in northern Vietnam, and was first inhabited by Emperor Ly Thai To in 1010.

An exotic and chaotic city, it is home to 6.5 million people and (it's said) more than four million motorbikes. Crossing the road will test your nerve.

To the north is the Old Quarter, a district of narrow alleys that's the traditional guild district. It still thrives with vendors and is where visitors are likely to spend most of their time.

The days of French occupation during the 19th century are still redolent, particularly in the leafy French Quarter which is characterised by European-style boulevards. Between the two you will find the small, but scenic Hoan Kiem Lake.

Visiting Vietnam? How To Do Hanoi & Halong Bay

The Hotel De L'Opera at 29 Trang Tien, housed in the former Ministry of Trade and Commerce, is one of the city's grandest places to stay. Rooms are contemporary, splashed with colourful Asian textiles.

A decent mid-range option, the 70-room Medallion Hanoi at 11 Ma May is handily located in the Old Quarter, a short walk away from Hoan Kiem Lake.

The fifth floor City View Cafe at 7 Dinh Tien Hoang overlooks the serene Hoan Kiem Lake. Order a taro milkshake and enjoy the strange juxtaposition of honking motorbikes swarming around the chaotic roundabout below you.

Further on, you reach the small scarlet Huc bridge that leads to the idyllic Ngoc Son Temple perched on an island in the lake. It's dedicated to General Tran Hung Dao, who led the triumphant battle against the Mongols in the 13th century.

You can pause for thought at the Martyrs' Monument, honouring those who died fighting for Vietnam's independence, then continue along the lake's east shore on the shady pathways lined with strangler figs. Time your walk during the early morning and you may catch tai chi enthusiasts in action.

Bun cha is a popular midday meal in northern Vietnam, consisting of grilled pork in a tangy vinegar-based sauce and vermicelli noodles. Try it at the Bun Cha restaurant at 27 Dao Duy Tu, a great spot from which to watch street vendors and passing rickshaws.

The Old Quarter is, essentially, a big market that still comprises centuries-old guild streets that specialise in particular products. Head to Hang Dau for shoes and the southern end of Hang Bong for silk and quality tailors.

The city's high-end shopping is concentrated around the Opera House on Trang Tien while the indoor Dong Xuan market at Cau Dong offers a mix of cut-price goods.

Take in Hanoi from The Rooftop at 83B Ly Thuong Kiet, a trendy drinking spot on the 19th floor of the Pacific Place building. Grab a spot on the balcony and order a Hanoi Summer – a delightful mix of vodka and lychee syrup with fresh raspberries and thyme.

Koto, 59 Van Mieu, does more than just serve tasty Vietnamese cuisine, such as beef baked in bamboo. It also employs young people who come from struggling backgrounds as part of two-year courses in hospitality.

Au Lac House at 13 Tran Hung Dao is a Vietnamese fusion restaurant in a century-old colonial mansion. Here, head chef Mr Nam dishes up the likes of grilled duck in a five-spice sauce.

The twin belltowers of St Joseph's Cathedral at 40 Nha Chung were built on the site of the old Bao Thien pagoda in 1886. The stained-glass windows from France are a highlight of the neo-gothic interior.

Slurp your way through a big bowl of pho, Vietnam's national dish of soup noodles. Try it at Pho Gia Truyen at 49 Bat Dan. It's been serving one dish since 1940, cooked in vast cauldrons stocked with chopped chilies. Be prepared to queue.

The Temple of Literature at Van Mieu was built in 1070 to honour the Chinese philosopher Confucius. Students flock here to pray for exam success. Elsewhere, visit the Vietnam Museum of Ethnology on Nguyen Van Huyen focusing on the country's 54 ethnic groups.

The botanical gardens of Bach Thao, 3 Hoang Hoa Tham, is a retreat of orchids, palms and banyan trees that's a popular backdrop for newlywed photographs.

Icing on the cake

Flanked by soldiers, the Mausoleum of Ho Chi Minh on Duong Hung Vuong attracts long lines of devoted nationals keen to pay their respects to the iconic communist leader, whose embalmed body is on display.

Next door is the marigold-yellow Presidential Palace, built in the early 20th century as the residence for the French Governor of Indochina. Ho Chi Minh rejected it as too grand and built his own humble lodgings within the grounds – a wooden house on stilts, which still stands today.

This article was written by Nick Boulos from The Independent and was legally licensed through the NewsCred publisher network.

Eight Islands For Hire Around The World