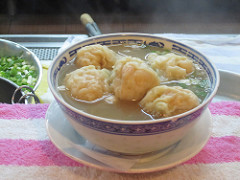 Hong Kong is famous for its cuisine, from street food to two Michelin-starred restaurants. We spoke to Denice Wai, Founder and Director of 6 Senses Cooking Studio (and Hong Kong's answer to Donna Hay!), to find out where she recommends...

Cuisine Cuisine, The Mira in Tsim Sha Tsui, Kowloon
Like the others, Cuisine Cuisine is also famous for Canton Cuisine. On average you will pay HK$250 per person.

Drinks
Ruggers in Causeway Bay Hong Kong
Ruggers offers a wide variety of beers and costs an average of HK$100 per person.

Sake Bar Ginn in Central
Go to Sake Bar Gin for a variety of Japanese sake and whisky. The average price is HK$200 per person.

Stone's in Tai Hang, Causeway BayVisit Stone’s for a variety of beers. The burgers are very good as well. On average the price is HK$120 per person.

In 2004 Denice Wai founded 6 Senses Cooking Studio. She has cultivated her passion for cooking since she was a little girl. While most girls her age were playing with Barbie dolls, Denice was in the kitchen helping her Dad, a professional chef operating a successful catering business in Hong Kong.

Her love for food and cooking has led her to travel extensively to Italy, England, Germany, Singapore, Australia, US, and Canada to experience the culinary delights that each country offers. She then integrates the best from the West and the East into her own unique cooking style.

Before opening 6 Senses, Denice freelanced as an instructor at Towngas during her stay in Hong Kong. When she lived in Vancouver, she opened “Denice Dessert House” that specialized in gourmet desserts and gift basket design for customers. She also hosts a success television show and radio program in Hong Kong and write for several newspapers and magazines.

In 2013 Denice has further expands her skills in creating her brand name “Denice Wai” Food Products.

Even more from Orion Expedition Cruises in 2014

Japan: the inside scoop