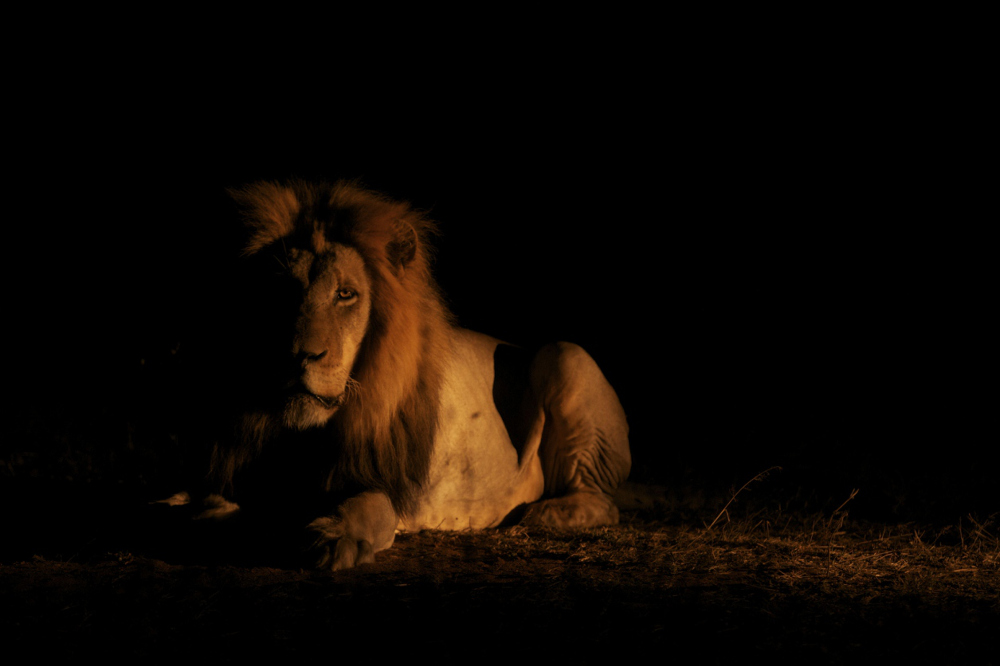 All was still and silent in the middle of the Shambala Game Reserve. A fat, orange full moon was floating gently above the horizon in the east, while directly across the kilometres of flat bushveld, a setting sun was gilding the ridges of the Waterberg mountains. All noise had been suspended in the twilight. Behind us a small herd of wildebeest had stopped and were staring at us like a group of delinquent old men. The only thing moving was a giraffe making its ungainly yet dignified way across the plains in the middle distance. But the giraffe could walk on. We'd just seen a group of four of the lanky beasts, gently trimming the tops of the bushwillow trees.

What we were after was lions, the king of the jungle. (Although we were told there was a bull elephant on the reserve that could kill a rhino with a couple of trunk slams, so perhaps not quite so regal.) The big cats are masters of disguise, however, and are cunningly the exact colour of the sandy soil and grass. According to our guide, Dean Pieters, they could be 1.5 metres away and we wouldn't be able to see them. There are just four lions on the 130-square-kilometre Shambala reserve, just a couple of hours north of Johannesburg – along with zebras, giraffes, rhinos, impala, kudu, ostriches, hippos, crocs and warthogs – the whole David Attenborough box set, if you will. But the only evidence of lions seen so far had been a few unsettlingly large paw prints.

It was winter in South Africa, arguably the best time to spot game, when vegetation is thinner. While the days are pleasantly warm, the clear skies make the evenings cold. Without a hint of a sighting and with the temperature falling, we drove back to the Nelson Mandela Centre for Reconciliation, our base for the night. This is Nelson's old holiday home, built for him after he was released from prison in 1990. The benefactor was Shambala's owner, Compare the Market tycoon Douw Steyn. He also owns the Saxon Hotel – where we'd started our journey in Johannesburg – and the Shambala Zulu Camp. Bill Clinton and Oprah Winfrey have both signed the guest book at this sumptuous retreat. They are among the politicians and South African bigwigs who would come for key discussions on the promotion of peace with then President Mandela. The centre is a sprawling, single-storey home, which recently opened to exclusive group bookings. There's a pool at its heart, with one end open to a veranda overlooking a watering hole where hippos come to wallow and weary guests can sit by an open fire swigging a cold bottle of South African Castle lager. Nelson's old television is still in the living room, and there is something slightly surreal about watching Long Walk to Freedom on it.

On the trail of lions

Arriving back from our fruitless lion hunt, we were greeted with hot towels and sherry and the smell of dinner being prepared in the kitchen. Dean was in the courtyard pointing out the Southern Cross in the night sky, until someone heard a low groan. We all fell quiet and listened. There it was again. Lions! Dean jumped into his safari car and raced off into the night. Twenty minutes later, he was back and excited. He'd found them. Dinner was abandoned and we piled into the vehicle, then hurtled into the darkness along the bumpy tracks.

As we drove, Dean pointed the 4x4's spotlight into the bush but by the time we arrived at the lion spot, they'd gone. We crawled along narrow tracks, branches brushing past our heads. Just as it seemed they'd eluded us again, a pair of eyes shone out of the darkness, illuminated by the spotlight. They belonged to a lioness lying in the grass, barely visible. Then, more low growls broke the deep silence of the South African night as the lion's sister walked in front of the 4x4 to greet and nuzzle her. They were completely undisturbed by our presence. As long as we didn't break the shape of the car by standing up or getting out, we would present no danger to the siblings. Then, two male lions crossed the bush further to our left. It was a precious experience (and, incidentally, gives the lie to the idea that there's any courage involved in hunting. Shooting them would be a doddle). Getting back was trickier, because the lions were on the move. The sight of the two shaggy-maned males strolling side by side down a dirt track, like a couple of mates sauntering back from the pub, made a lasting impression.

There are more lions at the Thanda private game reserve in Zululand in the east of South Africa, an hour-and-a-half's hop in a twin-prop, eight-seat plane. Thanda's lodge complex is set inconspicuously into a hillside in the largely mountainous terrain. Each lodge is effectively a private villa, modelled on the traditional thatched Zulu hut. A central bedroom and living room, with a log fire between them; huge bathroom – with a view of the bush below – indoor and outdoor shower, living room and sprawling veranda with a plunge pool and day bed overlooking the bush.

Elephants, we were told, come up to drink from the pools, a claim later borne out one afternoon when five did turn up to one at the dining area and bar, followed by a hyena later that night. As well as lions, Thanda and Shambala are home to rhinos, leopards, buffalos and elephants, the hardest of which to spot is the nocturnal leopard, whose spots help it blend into the landscape. There are rangers at Shambala who hadn't seen a leopard for three years; we didn't fare any better. While driving up to the lodges, we spotted the Thanda buffalo, fresh from a mud bath and nibbling at the grass. They didn't look particularly threatening – apart from their huge horns, which curl around like pig-tails, and which you wouldn't want to see coming at you. Later that night, on our first game drive, we quickly came across a big pride of lions, thanks to some superb tracking by chief guide Bheki Ngubane. The lions were locked in a stand-off with four rhinos who were eyeing up their spot. The lions' claim to kingship was somewhat diminished. Nevertheless, they held their ground while considering the two-tonne rhinos with disdain. Finally, the lions gave way. (Elephants, remember, beat rhinos. Rhinos beat lions. Ergo, elephant is undisputed champ of the jungle.) What was thrilling, and slightly disconcerting, was how close the lions came to the safari car. We could reach out and touch them, if we wanted to lose a hand. Looking into their lovely amber but deadly cold eyes was more than a little unnerving.

Both Shambala and Thanda are privately run and therefore subject to different rules to the public parks such as at Kruger. At Thanda, no more than two vehicles can observe any group of animals at one time, whereas I heard stories of lions being surrounded by dozens of cars in the bigger parks. All of the animals – elephants, rhinos, lions – are endangered and reserves, while raising questions of wildlife management and conservation that can feel uncomfortable at times, are essential for their survival. There remain challenging issues, however, such as elephant rides.

Shambala has a semi-habituated herd, rescued from Zimbabwe 20 years ago, the bigger members of which carry visitors around for an hour in the early morning before “doing elephant things” for the rest of the day, then spending the night in stables. There is no doubt that they are well cared for. At Thanda there are no elephant rides or stables – the elephants are completely wild. At other reserves, elephants give tourists piggy backs three or four times a day. And yet, the profits raised by these reserves pay to protect against poaching. It's a delicate balance. But to be up close to a lion, or even zebra or giraffe, in the wild – to watch an elephant push a tree over so it can turn it around and hide behind it – under a blue South African sky, is not only a privilege, it's the only way to understand properly just how magnificent and beautiful these creatures really are. This article was written by Andrew Johnson from The Independent and was legally licensed through the NewsCred publisher network.