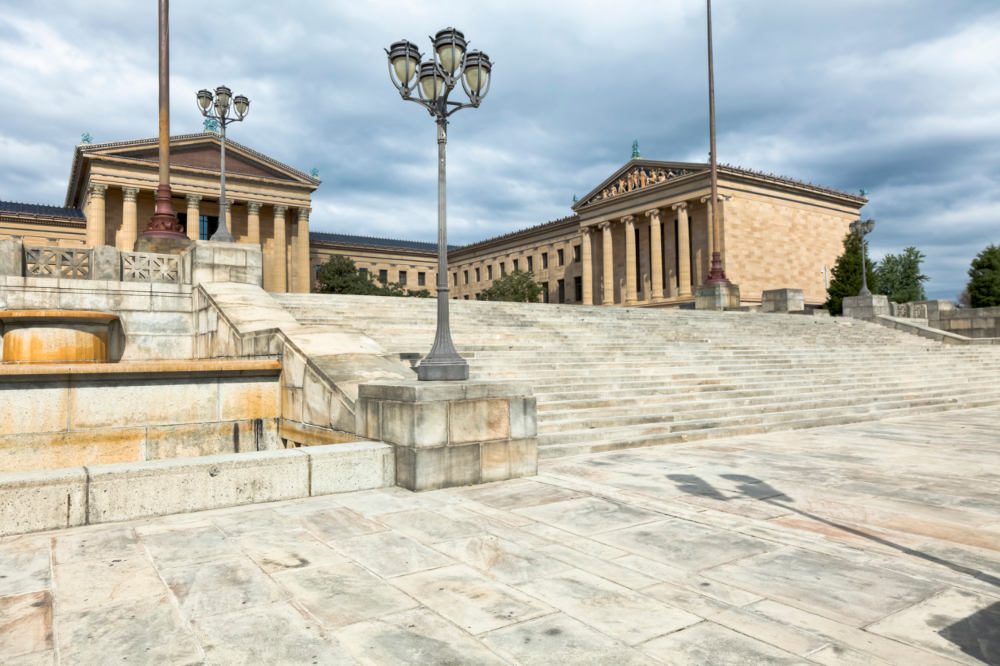 TRAVEL BLOG On The Trail Of Rocky Balboa In Philadelphia

On The Trail Of Rocky Balboa In Philadelphia

It has not been a creation without its detractors. Man hits another man. Repeat. Man falls over. Man climbs back to his feet. Cheers. Applause. A spot of shaky dialogue. Repeat.

And yet the Rocky film series – which has been helmed by Sylvester Stallone as the titular boxing hero Rocky Balboa since 1976 – continues to be a success at the box office. Last year saw the release of the seventh movie in the franchise, Creed.

It found Stallone’s ever-resilient warhorse attempting to train a new star of the ring all the way to title glory – this time the son of his former rival, nemesis and friend Apollo Creed. As with the previous six installments, it makes an evocative canvas of Philadelphia.

Fans of the Rocky saga will argue that its setting has long been one of its charms. For all its cartoonish elements – notably Rocky III and Rocky IV, and their cliched tussles with members of the A-Team and Soviet super-fighters – the series has always been rooted in the grime and occasional glamour of Pennsylvania’s biggest city.

Indeed, the first Rocky movie was so grounded in Philly that it won three Oscars, including the Best Picture gong. This clutch of statues made a star of Stallone but it also made a cinematic celebrity of a metropolis which, despite being less popular with tourists than New York and Washington DC, is arguably just as intriguing as both its 'neighbours'.

You can throw a few shadow punches in tribute to The Italian Stallion in the following places.

Few locations have a slot in Rocky folklore quite like the city’s main cultural landmark. A neoclassical feast of a structure, built between 1919 and 1928, the Museum of Art is sometimes referred to as 'the Parthenon on the Parkway' thanks to its architectural nods to Ancient Greece and all-round grandeur.

It is this grandeur which makes it the end-point to Balboa’s feted training runs in the first two movies, seeing him bound up the 72 steps in front of the main building before punching the air – the first time on his own, the second time, in 1979’s Rocky II, chased by a merry crowd of children and well-wishers.

This is echoed in everyday life. A statue of the boxer in triumphant pose, used in the movies, was donated to the city by Stallone.

It appears at the top of the steps in 1982’s big-budget Rocky III. In reality, it occupies a less high-rise position – immediately to the right of the steps, just off Kelly Drive. It was officially installed here in September 2006.

Of course, as one of America’s finest art institutions, the museum offers far more than its cinematic connection. It plays host to more than 227,000 artefacts, and is especially strong on the French Impressionists. Modernist wonders by Picasso, Dali and Jasper Johns are also prominent, as are Rodin’s sculptures.

No matter how many sequels Stallone makes, Philadelphia’s groove in history will always be tied to its role in America’s emergence as its own country. It was here, of course, that the Declaration of Independence was debated and adopted on July 4, 1776.

The building where this momentous star-striped event took place – another ornate pile constructed between 1732 and 1753 – is now known as Independence Hall, and protected as part of Independence National Historical Park, along with the iconic Liberty Bell, which reputedly rang in honour of America’s freedom from colonial Britain.

The link to Rocky? That second-film training run has him leaping park benches directly outside Independence Hall. You could attempt the same move yourself. But you would be advised to tick off what is a crucial slice of America’s story before – or after – you do.

One of Philadelphia’s most prestigious addresses, Rittenhouse Square was part of the blueprint for the city laid down by architect William Penn in the late 17th Century. More than 300 years on, now framed by elegant townhouses, it still has a leafy beauty that makes it an ideal place for deep and meaningful conversations. Indeed, it is here that Balboa and his new bride Adrian discuss their impending parenthood in Rocky II.

Tired of Star Wars? 7 Other Sci-Fi Attractions Around The UK

Philadelphia’s prettier places should not be missed – but much of the context for the Rocky films belongs to grittier areas of the metropolis. Both the training runs in the first two films see Balboa pounding the tarmac past the Italian Market – at South 9th Street where it meets Christian Street.

The first film presents this corner of Philly as decidedly down-to-earth, fires burning in barrels along the sidewalks. But while this corner of South Philadelphia has become a little more salubrious since 1976, South 9th Street is hardly a pocket of arch gentrification.

The largest, oldest working outdoor market in the USA is a place of coffee, cacophony and chatter – and is as representative of the city as anything pinned to the Revolutionary War.

On a similar note, this much-loved spot in the Passyunk district is one of the leading proponents of Philadelphia’s key contribution to global cuisine – the Philly Cheesesteak. Laden with fried meat, gooey cheese and huge handfuls of onions (if you go for the classic version), this big chunk of bread and protein would not feature in the diets of many boxers – at least, not boxers who are preparing for a major fight.

Nonetheless, the first Rocky film finds Balboa stopping off at a restaurant that has been part of the city’s fabric since 1930. It serves 13 varieties of cheesesteak.

Another Passyunk business has become a latter-day focus of the films. Rocky Balboa, the oddly touching sixth episode of the series, released in 2006, finds the boxer retired and widowed, running a restaurant bearing his dead wife’s name.

'Adrian’s' may be fictional but the setting is not. In real-life Philadelphia, it is Victor Cafe – an Italian eatery that has been doling out pasta and pastrami since 1933. It offers regular appearances from Mike Kunda, a Balboa impersonator – and serves up delicacies such as veal piccata sauteed with capers and lemon.

Not exactly part of the city’s tourist trail, the northern half of the central conurbation is a place for true Rocky aficionados only. A pilgrimage to 1818 East Tusculum Street in Kensington – you can take the Market-Frankford line of the SEPTA elevated train service to Somerset station – will allow you to stand outside the house that serves as Rocky’s home in the first and second films, as well as the Rocky Balboa reboot.

Depending on your stamina, you can also trek across from here to Max’s Steaks at 3653 Germantown Avenue – a proper hole-in-the-wall cheesesteak hot spot. The young contender Adonis Creed wanders in here for a spot of lunch on-the-go in the latest movie.

Further north, on the west bank of the Schuylkill River in East Falls, Laurel Hill Cemetery provides one of the series’ most poignant developments – the boxer and his son visiting the grave of cancer victim Adrian in Rocky Balboa. Founded in 1836 as a resting place for Philadelphia’s graceful dead, the cemetery contains 33,000 graves, monuments, tombstones and tributes.

Its genuine 'residents' include David Rittenhouse, the 18th Century Philadelphia astronomer and inventor who gave his name to Rittenhouse Square – and Thomas McKean, an 18th Century politician who was one of the signatories to the Declaration of Independence.