The funny thing about the ‘off-the-beaten-path’ is that everyone is on it.

People will queue for hours to eat at hole-in-the-wall restaurants and pay exorbitant admission fees to visit remote waterfalls. We’re all chasing authentic experiences that are undiluted by tourism, and Papua New Guinea is one of the last places where you’ll find them.

I spent a week exploring the Milne Bay Province by water, both above and below the surface. Unbeatable scuba diving, isolated islands and astonishing culture were everyday highlights our group of four enjoyed without another tourist in sight. 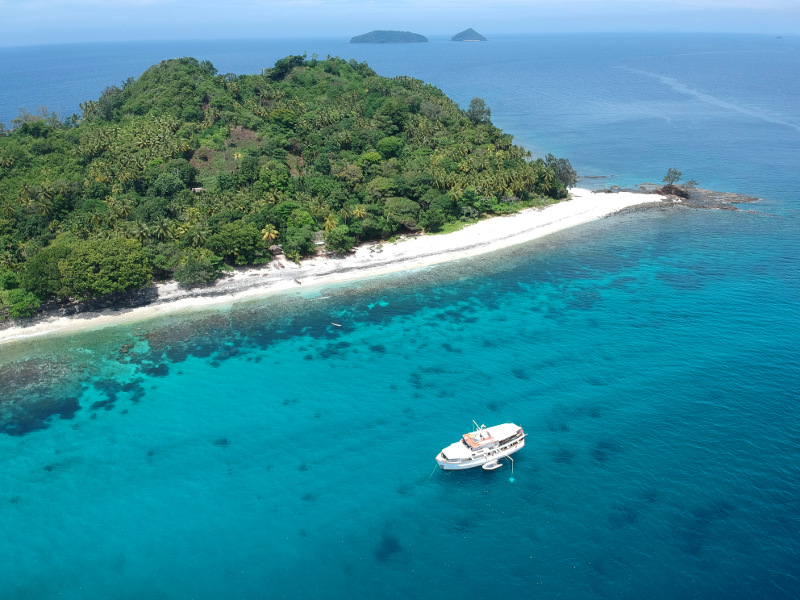 With major cruise lines opening up Papua New Guinea to the world, it’s only a matter of time before things start to change. For now, you can still enjoy a voyage aboard a small ship or charter boat and enjoy being the only vessel on the horizon for days on end.

We boarded the MV Golden Dawn in Alotau and then tore through the three-deck luxury dive boat like kids exploring a McDonald’s playground. We oohed and aahed at the compact cabins, bagsed our sun loungers on the top deck, and forged strategic relationships with Jennifer and Henry, the smiling kitchen staff.

All the while, the jungle-laced coastline and sapphire water slipped past as we set off for our first dive site. Our hosts and dive masters Craig and Kamilla wanted us in the water, stat. 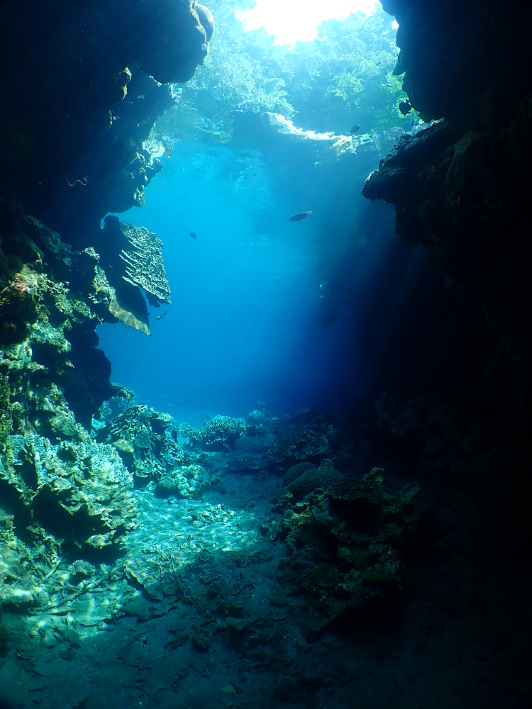 I’ve dived many times on The Great Barrier Reef but I’m no pro. I’m also not the first person to float the idea that Papua New Guinea offers the world’s best diving.

Each dive site was more breathtaking - pun intended - than the last, and it’s hard to pick a favourite.

Our first dive at Gunini Bay was only to five metres, but that was all it took to reveal coral life so vibrant that even Ariel would write home about it.

We also jumped in just off Gonubalabala Island to visit with manta rays and a clam the size of a bar fridge. At the Octopus’s Garden at Lawadi Bay both snorkelers and divers easily spotted an octopus, despite its miraculous efforts to camouflage itself against the coral. 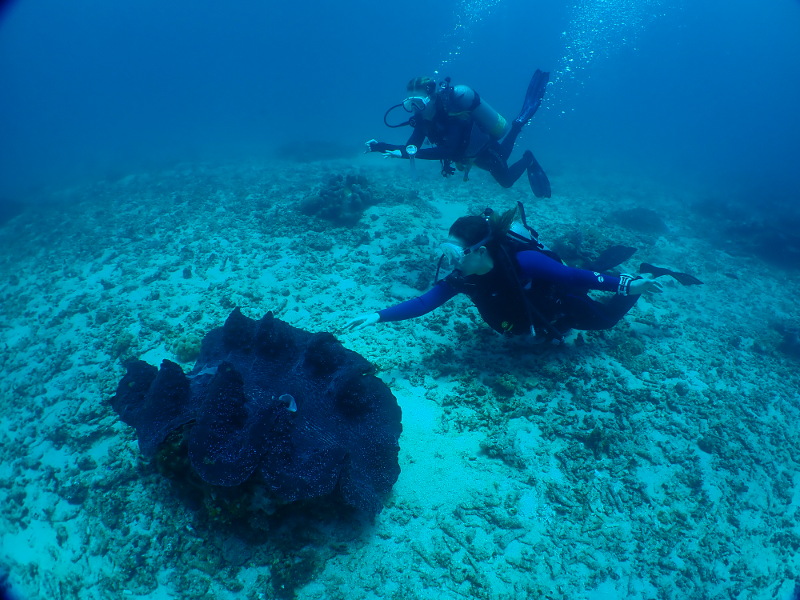 Then there was the dramatic Cobbs Cliff at East Cape, where we sank down the reef wall to a depth of 38 metres. The wonderful and terrifying expanse of the ocean was to one side and on the other loomed a miraculous wall of life. Giant trevally swam above us, silhouetted against the distant surface. Coral fans, anemone biospheres and fabulously coloured fish went about their business right before our eyes in an extraordinary vertical kingdom.

I lied. It’s easy to pick a favourite dive site. The sea caves off Lawadi fulfilled every childhood dream I had of being a mermaid.

We drifted past coral towers, paddled through anemone-encrusted arches and floated through narrow canyons, literally goggling as we tried to take in the overflow of marine life before us. 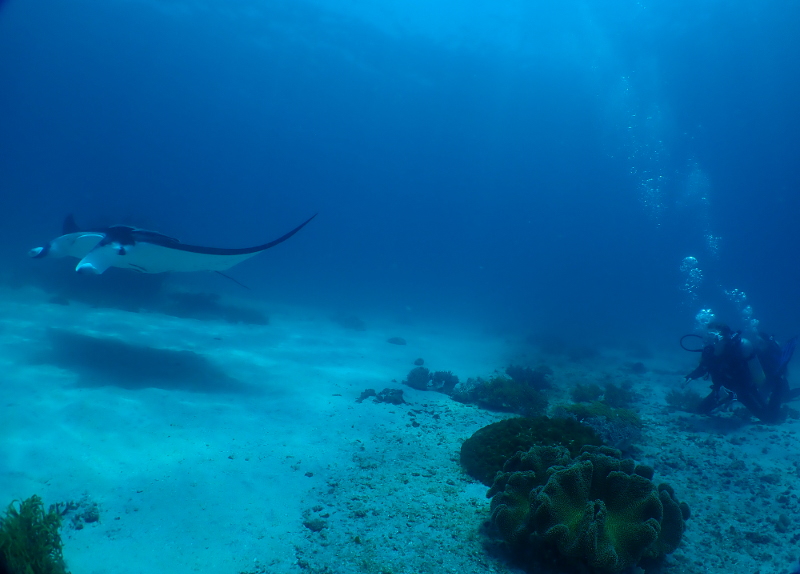 The dive at Gonubalabala deserves its own shout out. A manta ray cleaning station is not some human wildlife outreach as I ignorantly suspected, but a place where the giant rays hover over coral bommies, allowing cleaner fish to nibble the parasites from their gills and mouths.

Craig knew when the tide was right to catch the giants at home, so as soon as we dropped in we saw a three-metre manta. We were only ten metres down so the snorkelers caught all the action of the multi-manta show from above. But there was something narcotic about floating motionless on the ocean bed as a totally foreign life surged on around us. 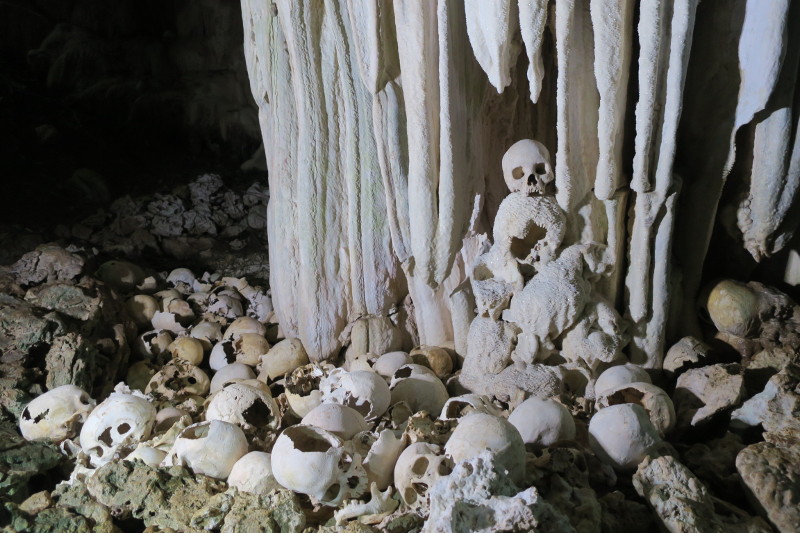 Unless you happen to be Indiana Jones, nothing can prepare you for the Tawali Skull Cave.

It’s not that it was hard to get to; - the jungle walk was easily accomplished in thongs and with a few hand scrambles. I scuffled down the narrow opening, blinking the sunshine from my eyes. As soon as they adjusted I realised I was about to put my hand on a gigantic spider, but my squeal was shocked into silence by the sight of hundreds of human skulls.

The bones in the Tawali cave are said to date back 300 years. There are no guard ropes, or prohibitions on flash photography. In the tangible stillness of the cave we were free to get up close to the mountains of skulls, some of them coated in glitter by otherworldly stalactites. 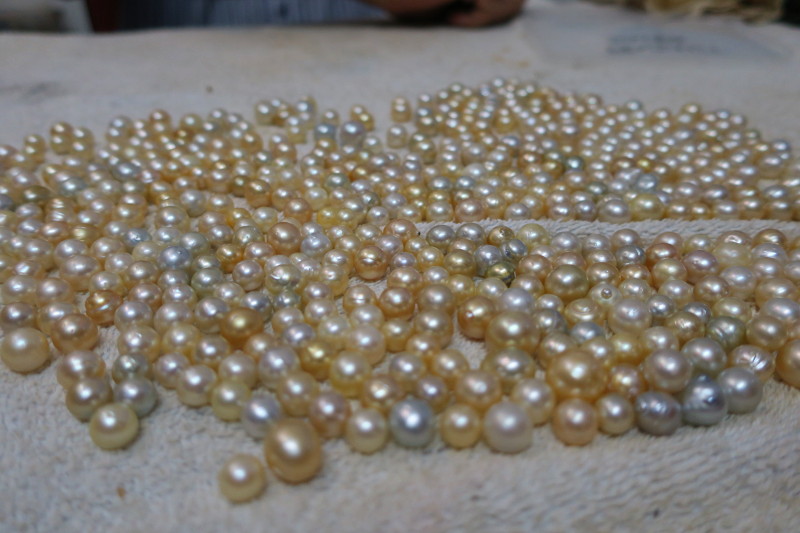 The Dawn’s female majority clamoured for a shopping trip, and Craig and Kamilla obliged with a visit to a pearl farm on Samarai Island, once known as the Pearl of the Pacific.

Pearl farmer Kim Harvey can often be found educating cruise ship passengers at nearby Doini Island Resort, but we caught him in the office. In an unassuming shack on a humble wooden table, Kim poured out a pirates’ hoard of golden pearls. He explained that the warm-hued gems are the most coveted of their kind, eclipsing the demand for their black or white cousins.

After a stunning crash course on pearl farming, which seems especially fiddly when it comes to the region’s specialty gold pearls, we eagerly handed over our kina and returned to ship with our own stash of sea treasure. 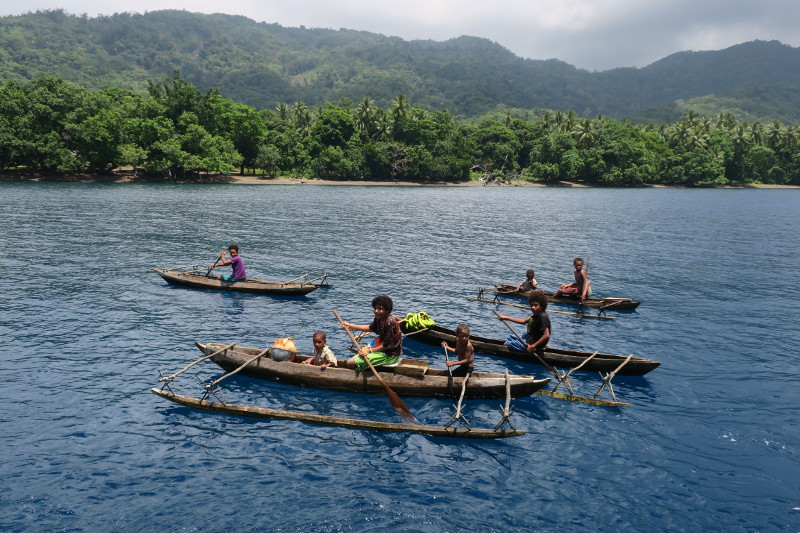 As local as it gets

The Golden Dawn’s itinerary is dictated by wherever the diving is best. This unpredictable program ensured that whenever we arrived at an island or secluded section of coast there was no affected show ready to receive tourists. Our lovely crew were all Alotau or Milne Bay locals, so we’d simply pull up and Jerry or Richard would paddle in to get permission to berth for the night.

On the occasions that we went ashore, we received warm welcomes that were usually accompanied by fresh coconuts. The children couldn’t help giggling at our dimdim faces, and were fascinated by our hair elastics, which we handed over willingly. The villagers were wearing an endearing mix of mainstream clothing, but this was the only clue that we were in modern times and hadn’t entered some undefined past where the island was the only world that existed.

At each bay we anchored in, locals would paddle out to us on slender outrigger canoes, selling bananas, pumpkins, and in one case, a four-foot Spanish mackerel. As impossible as it seemed, the local boys had just caught and cleaned the mackerel in their tiny outrigger. One thing I never expected from Papua New Guinea was the best fish and chips of my life.

8 Reasons Why You Should Visit the Dominican Republic