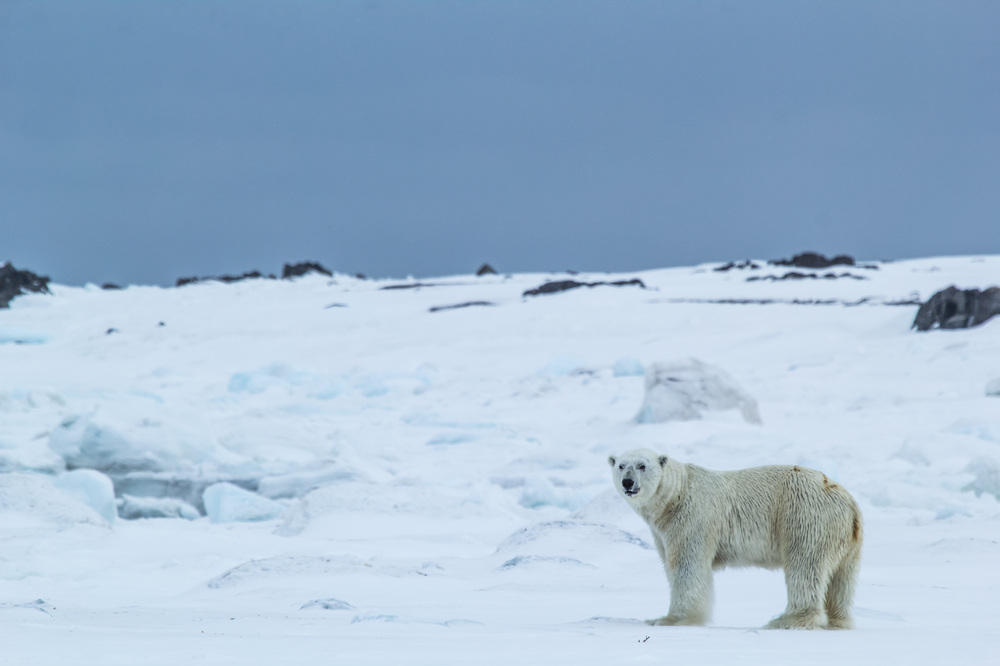 The Arctic For Unbridled Adventurers

What does a polar bear sound like? I know what it looks like. Huge. Ghostly pale. Paws the size of dinner plates. Cuddly demeanour. Less-than-cuddly temperament.

But at 2am, camped out in the lonely whiteness of the Arctic not-quite-night, I realised I’d neglected to research that one crucial detail. And in that moment, everything sounded like polar bear.

Every snuffle and snore from slumbering tent companions; every whisper of wind flapping the flysheet; every creak of a guy-rope. Morning seemed a long, long way away.

Night terrors aside, that sub-zero sleepover in Spitsbergen was a highlight of a compact Arctic odyssey. I had ventured up to 78 degrees north on a new five-day activity tour in Svalbard – a macro-adventure, if you will, sandwiching a two-day, pole-style trek between husky sledding and snowmobiling excursions.

Guided by polar explorer Alan Chambers, a former marine who has led more than a dozen expeditions to the top of the world, our group of seven novices would strap on skis to test ourselves against the wilds. We would learn to pack, harness and haul sleds, pitch expedition tents, cook with melted snow and dehydrated rations, and – ideally – not get snaffled by bears. It’s Shackleton lite, a modest test of endurance in itself or a taster to see if a full-blown polar trek is for you.

The epicness kicked in even before our plane landed at Longyearbyen. The Svalbard archipelago, of which Spitsbergen is the largest island, lies 800 kilometres north of the Norwegian mainland, halfway to the north pole; it’s a three-hour flight from Oslo to Spitsbergen – and one on which you really need to snag a window seat.

I gawped at strange curlicues and zigzag ice floes frosting the surface of the Greenland Sea as glaciers and snow-caked ridges loomed: small wonder the island’s discoverer, Dutch mariner Willem Barents, named it Sharp Mountains. Longyearbyen, squeezed between ice-speckled fjord and snow-dusted mountains, consists largely of prefab boxes with splashes of colour to distract from their plainness.

Obliterated during the Second World War, the town was rebuilt as a mining colony with little concern for aesthetics. But that juxtaposition of forbidding beauty and industrial grittiness lends it the air of a movie set.

Indeed, it inspired the fictional town of Fortitude, setting for the eponymous pseudo-Scandi-noir TV series (actually filmed in Iceland). Unlike its screen twin, Longyearbyen is a welcoming burg, its cosy bars and restaurants fuelling would-be explorers with top-notch grub and surprisingly reasonable booze (its miners – and, now, tourists – enjoy duty-free prices).

I woke next morning to find the landscape transformed by a downturn in the weather. Though the mercury had soared overnight to a tropical (for Svalbard) -2C, our faces were needled by snow flurries as we learnt to corral huskies, clamping each dog’s rear between our legs and foisting the harness over its head.

“Never, ever let go of your sled,” our guide, Gregor, exhorted. “Whatever happens, keep at least one hand on the handle, and one foot on the stomp-pad brake.”

And that was pretty much the sum of our instructions. We were two to a sled, so I reclined at the front while my co-pilot urged on the dogs with a cheerily inauthentic “Hup!”

And away we swished. Lounging gave me the opportunity to size up the dog teams: a handful of pure-bred Greenlands, broad-muzzled and black; a small, wiry, energetic racing dog; and two-dozen more of varying hues, fur lengths and eye colours, named in batches.

There were Lion, Tiger, Panther and Ursus – an indubitably bear-like creature. There was the bibulous trio of Vodka, Whisky and Snaps, and astronomical Mars, Venus, Neptune and Pluto. I steered well clear of Berserk, Rage and Amokk.

Two hours’ sledding brought us to the Scott Turner Glacier, a few kilometres south-east of Longyearbyen, where we descended into the belly of the ice cap. Pendulous shards dangled above us while vertical ridges striated the walls of the ice-cave, creating the sense of being swallowed by a vast, frozen whale. I stroked layers of different shades in the walls, some translucent with air bubbles, others dark with glacial silt – 'ice bacon'.

That evening, the whiff of husky lingering pleasantly on our clothes, we settled into the charming faux-wood-cabin Kroa bar to discuss the next day’s expedition: our chance to play Scott of the Arctic. First, some reassurances: “I’ve been coming here for years,” Alan told us, “and I’ve seen only one polar bear near Longyearbyen.”

I relaxed, a little. Just in case, we’d have with us a rifle and a man who knew how to use it – Mikhail, a Russian guide with extensive polar experience.

Scandinavian tour: A Tale From The Top Of The World

The other extreme: Antarctica Flights – The World's Best Day Tour

Next morning we were dropped off 10 kilometres south-east of Longyearbyen, along with our sleds. Mine was crammed with a tent and spare poles, stove and fuel, pots, five-season sleeping bags and mats, food, fuel, clothes and safety equipment, all topped with a shovel.

It was alarmingly heavy, I realised, as I strapped on my hauling harness. Prior to that morning I’d spent a grand total of half an hour on skis, and 35 kilograms is a fair heft to shift – but I planted my poles firmly and yanked at the sled, heartened that it glided forward smoothly. The rhythm of the left-right-left swooshing gait soon had me mesmerised, and I fell into a comfortable sliding stride.

The corrugated massifs on either side glowed in the pure air. I could make out every wrinkle and ridge, along with dark lumps that might be rocks – or something more sinister, more ursine.

We passed a reindeer snuffling for lichen beneath the snow blanket, then clusters of his surprisingly tiny, Tic-Tac-sized droppings. A few snowmobiles buzzed past, but in the main the only sounds were the metronome swishes of our skis and sleds.

As we paused to sip a hot drink from our flasks and munch a snack, I asked Mikhail to compare our experience with that of the real-deal polar adventurers. Most commercial expeditions depart from Ice Camp Barneo, he told me, a base created each year by the Russian Geographical Society on a floe around 89 degrees north.

For just a month, groups helicopter in, ski north for perhaps 100 kilometres over eight days and return triumphant – so they hope – from the pole. A full polar expedition from the edge of the nearest land, though, would take several weeks and involve 130-kilogram sleds.

Our own efforts seemed rather puny in comparison. Still, we covered around 10 kilometres in five hours that day – not far short of a typical leg on the Barneo-to-pole trek – and at 4pm Alan and Mikhail cast around for a suitable camping spot, settling on a sheltered hollow backed by a low cliff.

Alan wheeled out his best sergeant-major, barking at us to put the tents up, using skis as guy-rope anchors and shovelling snow on to valances in place of pegs. We lit stoves in the spacious porches and began melting snow for dinner, Mikhail explaining that not all snow tastes the same.

“Always collect freshly settled snow,” he advised. “Old snow that’s been sitting on ice for a long time is salty.” Who knew?

Dinner – a surprisingly tasty meat and potato hash – was finished all too quickly. It was barely 7pm – surely too early for bed – so a few of us popped out to stretch our legs above the campsite.

On that late March night, the craggy, other-worldly landscape was cast in an ethereal, luminous half-light that never quite dimmed; hard to imagine how, just over a month earlier, darkness reigned for weeks on end. By 8pm the temperature had plummeted and we retreated to our respective tents to sleep – or to try.

My own slumber was interrupted by bouts of bear-a-noia, though I must have slept eventually, waking to the hiss of the kettle melt-boiling snow for porridge.

Clear skies brought radically lower temperatures, and there was no dallying as we clicked into skis and headed north-west back towards Longyearbyen. I learnt two things on that 16-kilometre trek: first, that ski-sledding uses – nay, batters – muscles I never knew I had.

And second, that a landscape of almost consistent white can reveal a subtle kaleidoscope of almost infinite shades. I was dazzled, both literally and figuratively.

After powering our own way into the wilds and back, our final morning’s snowmobile safari seemed a little like cheating, as if scarring pristine snow with the tracks of a roaring Yamaha was a kind of betrayal. The guilt, though, lasted mere moments.

Hurtling along at 48 kilometres an hour was beyond exhilarating, the succession of vistas and -30C wind flurries providing a series of invigorating face-slaps. Some 35 kilometres north-east of Longyearbyen, we silenced our engines and crunched to the cliff edge at Elveneset, and to this dramatic island’s grand final flourish.

The land dropped away beneath our feet like a stage curtain, exposing the expanse of the ice-fringed Sassenfjorden and a striking tableau of granite bluffs and glacier-etched valleys. Beyond those mountains lay the polar ice cap and, not so much farther, the very top of the world.

Tempting? Well, perhaps one day. For now, my inner explorer was sated by the Arctic amuse-bouche served up by Spitsbergen.

This article was written by Paul Bloomfield from The Daily Telegraph and was legally licensed through the NewsCred publisher network.

On The Chairlift With James Blunt