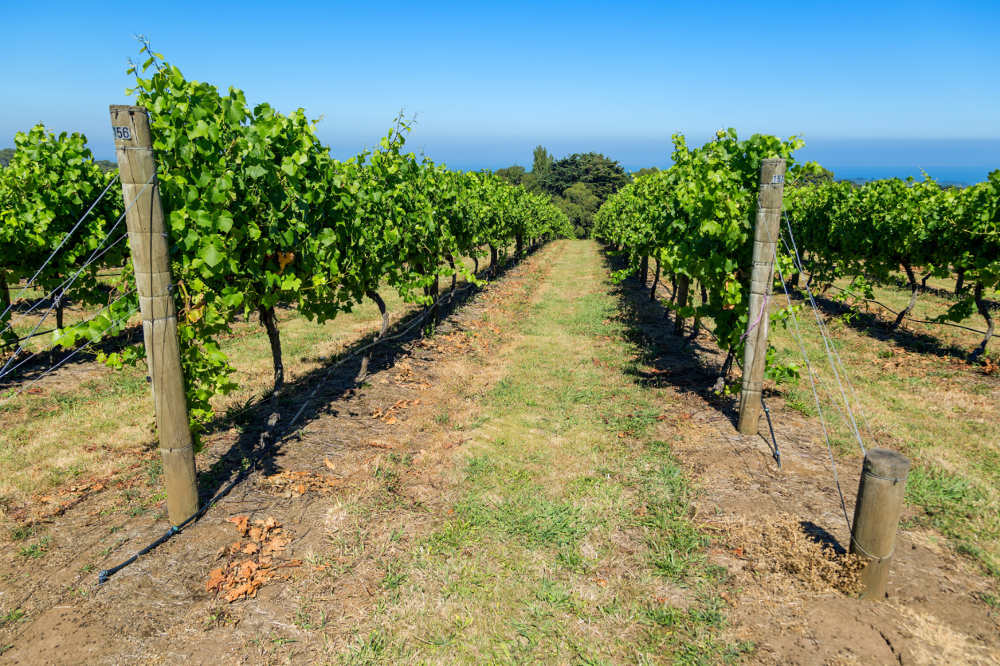 Lycra and good wine are two things that don’t usually appear in the same sentence. But why not? Especially in Australia, where people are not so hung up on formality. With this in mind, I decided to tour some of Australia’s up-and-coming vineyards by mountain bike, on the Mornington Peninsula south of Melbourne. The peninsula encloses the southeastern corner of Port Phillip Bay like a flexed arm.

It’s a stretch of coast that has a holiday air about it, but to the east, on the biceps and triceps if you like, is a bulging upland that has a burgeoning reputation for its wines. I pictured a leisurely wheel-borne meander, sipping from glasses with a hint of berry here and a flinty nuance there.

What I hadn’t reckoned on was the influence of a long-standing Aussie friend who had lent me his mountain bike. A member of the local Red Hill Riders, he appointed one of his more fanatical friends to guide me. I met Mark at Arthur’s Seat Park, where the club has built some downhill trails. An eighth of the way down Trail 4, I realised I needed to go warily. Following in Mark’s tracks, I inhaled an aroma of burnt brake pad. But a rhythm soon developed, and we switch-backed through the bush and flew among the trees. What goes down must come back up, and there followed a lung-busting kilometre of gravel track, with lots of leg-testing elevation. It was hot and hard going. The agonised limbs of gum trees reached across the track and birds cackled in the branches around us. Finally we made the summit road and from there it was a breezy, five-minute freewheel to Foxey’s Hangout – a vineyard with an excellent cafe, the Cellar Door.

This was more like it, I told myself. The cafe has a rustic wooden floor and hefty tables, with a blackboard announcing: “Wine and food.” The glass frontage gives on to the head of the valley, where neatly trained vines stand in taut lines. Sheltered by tall gum trees, it is incredibly pretty.

After early attempts that withered and died a century ago, winemakers began creeping back on to the Mornington Peninsula in the 1970s and '80s, most planting only a few hectares. They started with cabernet and malbec grapes, but the climate was unsuitable; with sea on two sides and 300 metres of elevation, the breezes here are cool. Nowadays the area is known for its pinot noirs and chardonnays. I had a sip of Foxey’s single vineyard pinot noir, recipient of many awards. The roadside verges here, often five or 10 metres broad, are useful for mountain-bikers. Isolated from the cars, we wove left and right among tree trunks and telegraph poles, and over bumps and ditches.

Next we turned on to McIlroys Road, a dirt track lined with copses, among which the tyres of mountain bikes had worn a snaking, gentle downhill track. Soon enough we reached the bottom but it was only a short climb to Polperro, another vineyard with a restaurant and rooms. Here I met winemaker Sam Coverdale. He took the estate’s name from the Cornish village where his father grew up. He talked us through the range of wines that he creates from vineyards on the peninsula and beyond, then we repaired to the dining terrace with its view over the north-facing vines. It was the veraison (the onset of ripening), so the grapes were starting to change colour – a subtle and beautiful scene. Then I looked down at my biking gear, like a scarlet slash on the easy elegance of the place. Marinated scallops and a salad of crunchy snow peas and cashews followed, accompanied by a glass of Coverdale’s single-vineyard chardonnay – a perfect pairing.

Back on the bikes, we headed back up the verges to the Flinders Road to an estate called Ten Minutes by Tractor, known for its single-vineyard pinot noir and chardonnay but also some younger pinot gris and sauvignon blanc, drawn from three vineyards on the peninsula. Mark said goodbye, leaving me to the Shands Road, which meanders through spooky glades of trees and emerges on the descending edge of the peninsula. There I visited Montalto, an estate that has cultivated olive oil and wine since the '80s. Simon Black, its winemaker, talked about the maturity of the viticulture on the Mornington Peninsula, and the region’s strengths.

Winemakers are now experimenting, creating wines with different grapes, including moscato giallo and friulano. These are interesting times. Montalto’s restaurant has a superb view over the estate’s 12 hectares under vines, dotted with sculptures and complete with walking routes and picnic areas. It’s an ideal place for a lie-down in the sun, before setting off down the hill once more and along the coast to Flinders at the southeastern tip of the peninsula. Lycra and wine-tasting may not go together often, but this was a novel way to explore the peninsula. In my view, another perfect pairing. This article was written by James Henderson from The Daily Telegraph and was legally licensed through the NewsCred publisher network.