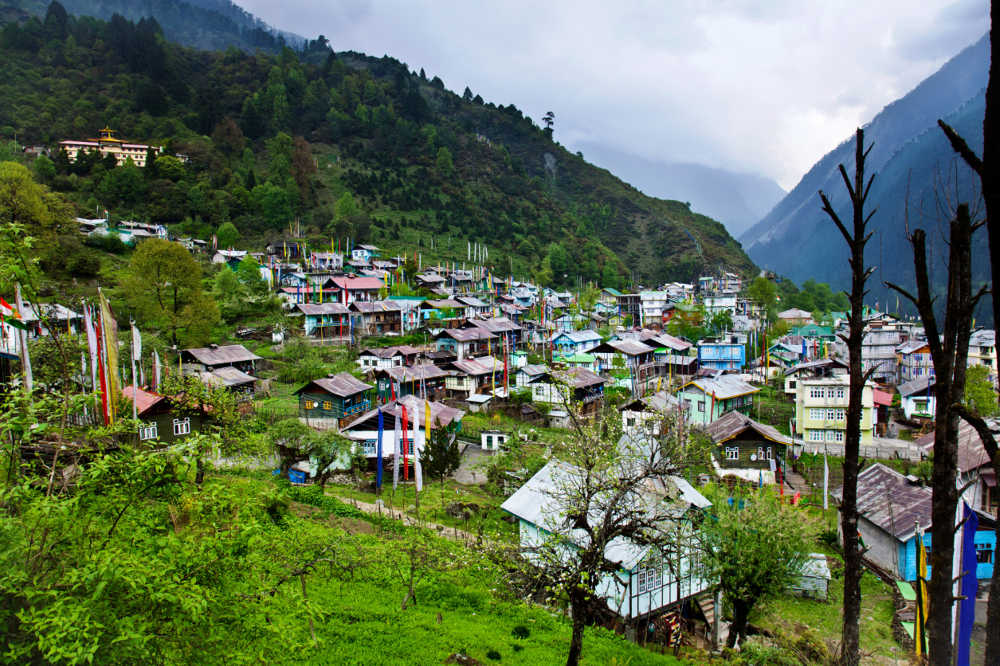 Frogs were drying over the open range in the kitchen, blackened by smoke. Their legs had curled sinuously and I tried not to look aghast when I learnt that these were destined for our consumption.

I sipped my cardamom tea and fixed my eyes instead on the iPad in front of me and the press coverage I had called up about Tenzing, my homestay host. When we had set out for this country farmstead the previous morning, we had no idea that we would be staying with an environmental activist and local hero.

We were in a remote part of Sikkim. Bordering Tibet, Bhutan and Nepal in the eastern Himalayas, this is India's second-smallest state (after Goa) and probably its most beautiful. Some years before I had spent a week or so on a trekking holiday here.

Now I had returned to explore an area newly welcoming tourists. Dzongu, to the north of the state, is the homeland of the Lepcha people, one of the original ethnic groups of Sikkim.

Small in stature, the Lepchas are a particularly vivacious lot who traditionally pride themselves on living in complete harmony with nature. British officials in the early 1900s rather patronisingly described them as real-life elves.

Today, there are Lepcha groups in Darjeeling and Kalimpong, as well as scattered communities across Sikkim and a concentrated population of roughly 8,000 in the Dzongu reserve. Covering an area about the size of Guernsey, this land was given to the Lepcha people by the king of Sikkim (the Himalayan state was taken over by India in the mid-1970s).

Only members of the tribe may live here. It is a spectacular place of waterfalls, jagged peaks, swathes of forest and abundant greenery.

The Lepcha people call it Mayal Lyang, which means 'hidden paradise'. Roads here are sparse and pot-holed; and the accommodation is limited to a handful of new homestays.

Tenzing's bucolic homestay is rustically comfortable and spotlessly clean. It has four newly built guest rooms, a large covered terrace where splendid meals are served, and a communal bathroom.

Guests are also welcome to drop into the kitchen for a chat. Tenzing Lepcha (the tribal name is frequently adopted as a surname) and his siblings speak impeccable English and translate for their elderly parents.

The homestay has no running water, no phone lines and is about 15 minutes' perpendicular walk from the nearest road. Our group of seven friends had arrived the afternoon before.

We made our way through a tall tunnel of gourds to reach the rambling farmhouse. Tenzing and his family greeted us with rice cakes and cups of tea before taking us on a tour of the little estate: cows and goats in bamboo byres, pigs in pens on stilts, chickens clucking around under orange trees laden with fruit.

The sense that we had entered an enchanted world had a bitter-sweet resonance because of the sad scenery we had passed on the way. From Sikkim's capital, Gangtok, our route had taken us through what should have been magnificent mountain terrain.

Yet near the outlying town of Mangan, much of the landscape by the River Teesta is scarred by hydroelectric dam construction and by the effects of a severe earthquake that struck in 2011. Many local people maintain that the two are not unrelated: some say that when the earth shook, the very mountains were fighting back against the dam development; others suggest that the seismic activity was exacerbated by all the blasting and tunnelling for the enormous hydropower project.

That evening, as we sampled local chang – a weird and wonderful brew of fermented millet – we talked to our Lepcha family about the disruptions. And the penny dropped.

Kerala: The Lake Cruise That Brings Out India's Colours

I realised that some years before I had read about Tenzing, first in The Independent. He is famous for the stance he took against the dam building.

It is, of course, one of the marvels of the modern age that you can access almost any information under the sun almost anywhere under the sun. Chatting in the kitchen the next morning, we whipped out an iPad and looked back over Tenzing's campaign.

"Hunger strike over India's lost paradise" ran the headline of a report by Andrew Buncombe, The Independent's Asia correspondent, on Tenzing's actions in July 2007. Tenzing, then 20, and fellow protester Dawa Lepcha were at that stage in hospital in Gangtok.

For more than a month they had sat, day and night, fasting outside a prominent government building in the city. By the time the article was written, the authorities had insisted they receive some medication.

We looked up the video of the two protesters that had been posted that month in 2007 on YouTube, showing them on drips and being blessed by Lepcha spirit priests. Save for the fact that the two men had survived and had eventually gone home, I hadn't known the outcome. Sitting across the kitchen from the drying frogs, cocks crowing in the background, Tenzing filled in the gap.

"We were on hunger strike for 63 days in total," he told me. "We called it off when the state government promised to make a series of concessions about the dams. But after a few months we realised these actually weren't going to happen."

So, he said, they went back to Gangtok and resumed their hunger strike. This time a small group of them fasted in relays.

They kept it up for 96 days. They were wiser this time, too. They had the help of a lawyer, and when they negotiated they got the agreed concessions in writing.

"In the end," Tenzing said with a smile, "we managed to stop the construction of four of the proposed dams."

Reconnecting with the land

And what now in this David-and-Goliath situation? There are still around 20 dams planned and at various stages of construction in the region. While the areas of Dzongu that we travelled through over the next few days were an Eden of lushness, other parts of the Lepchas' homeland have already been devastated, either by flash floods or lack of water.

Tenzing explained how he is running a grass-roots campaign. He aims to encourage the Lepcha communities, along with others in Sikkim, to reconnect with the land and not to be tempted to sell out to hydropower investors who are brandishing cash.

His farm with guest accommodation is intended as a model for others. The aim is that tourism will not only bring in money but will also help to protect the land and the way of life there.

And with that, he jumped up and announced enthusiastically that we should set about exploring that land ourselves. Over the next three days our Lepcha hosts took us on steep hikes through woods and terraced farmland to serene villages.

A consignment of metallic-painted wellies had hit the local market a few months before, and these have become standard footwear: the sight of little Lepchas farming in golden boots looked near-mythical. We walked over bridges festooned with butterflies – swaying dizzily along one traditional cane-and bamboo-structure strung over a gorge.

We visited sacred lakes and hot springs; we called in at a hilltop monastery; we passed large and lovely prayer wheels, positioned beside mountain streams so that they spin continuously, driven by water power. Vibrant birds flitted across our paths: scarlet minivets, iridescent sunbirds, jet-black drongos with great forked tails.

We gazed at gigantic cobwebs draping down from the tops of huge trees. We marvelled at branches thickly clad with tiny purple orchids. A walk with a group of Lepchas can be challengingly brisk, but mostly we moved at a relaxed pace as our guides stopped frequently to tell us about the special properties of many of the plants in the dense undergrowth.

Back at the homestay we feasted on the bounty of the land: breakfasts of buckwheat pancakes stuffed with spinach; lunches of millet bread and pork casserole with spicy tree-tomato pickle; dinners of nettle soup and spicy chicken. The frogs were served on our second evening as snacks with chang. And they proved remarkably tasty.

After these light bites, we were ushered downstairs from the farmhouse. Below the stilts, our hosts had arranged a show of Lepcha dances.

We watched a few demure and perfectly executed showpieces. Then suddenly things hotted up.

The cultural evening rapidly became a Lepcha night out: Bollywood music blared, the members of the outlying village arrived and everyone headed for the dance floor. The poignant sense of a homeland under threat vanished. The party spirit was tangible – and quite as intoxicating as the chang.

This article was written by Harriet O'Brien from The Independent and was legally licensed through the NewsCred publisher network.