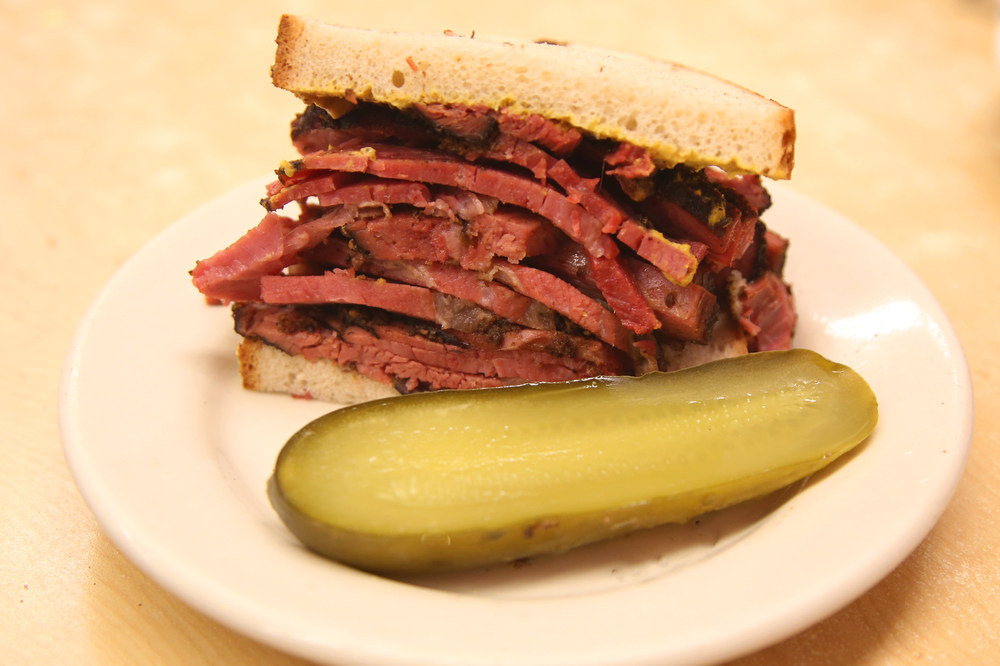 "It’s after three so we’ll have missed the lunch crowd!" I announce as we pound the wet pavements towards Katz Deli. It’s my first time in New York City and, as cinephiles, our sightseeing today has focused on movie-related locations.

So far, we've had lattes at Hugh Jackman’s coffee house in Tribeca and posed for photos outside the fire station from Ghostbusters. A rain-soaked walk through Chinatown and Little Italy leads us to our next destination: the restaurant in which Meg Ryan faked an orgasm in When Harry Met Sally.

"We're here!" I say, stuffing the damp map in my pocket. Salamis hang in the window like savoury Christmas baubles, above which a sign promises us the best sandwich in town. This isn't news to me.

I’ve read the reviews. Their pastrami on rye is legendary. Sally Albright certainly seemed to like hers.

Pushing open the glass doors, I fear we’ve wandered on to the wrong set. Crammed into a queue with other hungry, sodden diners, I feel less like the bubbly blonde from a rom-com and more like an extra waiting in a soup line from some film about the Great Depression.

A burly attendant hands us each a ticket as we’re corralled into an area facing the most confusing service counter I’ve ever seen. It stretches the length of the dining room and behind it an army of staff speedily carve meats and slap mustard on to sandwiches amid a chorus of yelling.

“Move down guys!” The door attendant hollers at us. Having congregated with other confused diners, we hesitantly move along the counter.

“Pastrami on rye!” a server shouts, before presenting the fabled sandwich to a nearby customer. It’s enormous. Gargantuan.

It almost puts the Chrysler building to shame. Intimidated, I reconsider and decide on a lox (brined salmon) and cream cheese bagel instead.

A week in a day: A Perfect 24 Hours In New York

Forget about sleeping: The Arts Scene In New York City

While a server barks at Ade to move along again, I circumnavigate the room hoping to grab us a table, but the place is packed. Opened in 1888, Katz remains one of the most popular delis in the city. Customers continually trickle through the doors, many of them tourists who pause at the counter, perplexed, while practised New Yorkers launch themselves at emptying tables.

Ade looks tense, like a squadron leader plotting his attack strategy. I follow his lead; some tourists don their coats and I hurl myself at their table.

They stare at me, alarmed. As I apologise, I glimpse Ade among the crowd getting yelled at again: “Move down! Move down!” There must be some system here that we’re completely failing to grasp.

Ade eventually emerges from the carnage with our lunch. Battle-worn and weary, we quietly eat our sandwiches. They are good.

I suppose, like in the film, it’s been a dizzying experience, but in a very different way.

This article was written by Sophie Sellars from The Daily Telegraph and was legally licensed through the NewsCred publisher network.

Only In The Northern Territory