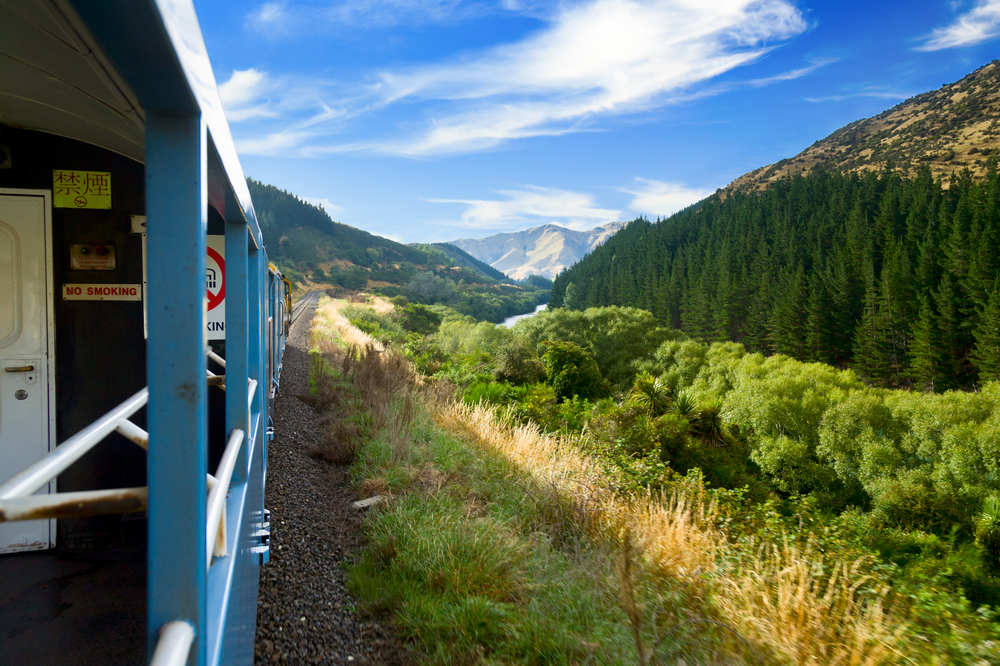 New Zealand is considered by many to be the most beautiful place on the planet. Although many believe that the best way of exploring it is by car (or motor home), there is much that can be enjoyed from the comfort of a train.

There are several shorter heritage railway journeys, such as that offered on the Taieri Gorge Railway, but visitors wanting to get a real feel for travelling through New Zealand by train have a choice of three main long-distance routes, two in South Island and one linking Auckland and Wellington on North Island. All the trains used for the journeys are kitted out with observation cars from which to enjoy the magnificent scenery and, for those really wanting to make a meal of it, all contain buffet cars.

Conversation in them at the moment might well be dominated by the recent triumph of the All Blacks – worthy back-to-back winners of the Rugby World Cup. And although that may still be a sore point for smarting Australian fans, help in the drowning of sorrows is always on hand in the form of New Zealand’s excellent wines.

And of course those remarkable, transcending views. They really do transport you to another planet (it is no accident that New Zealand was chosen as the location for the filming of both the Lord of the Rings and The Hobbit trilogies).

I recently journeyed on all three of New Zealand’s main rail routes. It was an exhilarating, wind-in-the-hair experience admiring the country's landscapes and snow-capped peaks from an open observation car in a train bowling along at 100 kilometres an hour. And there were many highlights.

My journey began in Auckland with the one train still used by many Kiwis as a straightforward means of getting from A to B – the Northern Explorer, which links the country’s largest city with the capital, Wellington. The train eases out of Auckland’s imposing Beaux-Arts station and crosses a causeway over a lagoon leading to a vast wetland; after that it climbs through craggy karst limestone hills with not a sign of habitation for kilometre after kilometre.

The observation car started to fill as we approached the spectacular horseshoe bend and Raurimu spiral that winds the train on to a volcanic plateau. Closer acquaintance with volcanic peaks is offered by the chance to break in the journey at National Park station and spend a couple of nights at one of those few New Zealand hotels that echo the monumental railway hotels of Canada.

Chateau Tongariro was modelled on Chateau Lake Louise and welcomed its first guests in 1929, just 202 days after work began; today it retains an old-world ambience, though dinner jackets are no longer required. There are other attractions here too, though, including many lovely walks to waterfalls and, for the more actively inclined, the 19-kilometre Tongariro Alpine Crossing, widely regarded as the best one-day trek in New Zealand.

Back on the train, moving one’s gaze from the classically shaped volcanic cones to the cutting sides, it’s easy to see why the silver fern was adopted as New Zealand’s national emblem. They flourish in the ash and pumice ground, and are to be seen along pathways where their glow in the moonlight helps to pinpoint the way.

Deep gorges are glimpsed from the high girders of hard-wrought viaducts in empty country, punctuated by lonely clusters of veranda'd bungalows roofed in red or green corrugated iron. A cloud of dust above a ribbon of gravel road marked the progress of a pick-up truck. The brilliant red flowers of rata trees provided a splash of colour and contrast to the ubiquitous gorse, introduced as a hedging plant from Scotland and now as much of a curse as the possums.

The final kilometres into Wellington were spectacular, the train clinging to the sheer cliffs overlooking Cook Strait and the rodent-free nature reserve of Kapiti Island. We passed through tunnels burrowed through the headlands as the train descended to run beside a vast marina and the harbour before arriving at Wellington station, the country’s largest building when it opened in 1937.

Transport choices: 12 Days In New Zealand And No Second To Spare

Do the locomotion: On Board The World's Extreme Railways

The three-hour journey across the Cook Strait between Wellington and Picton has been described as one of the most beautiful ferry rides in the world. The enchanting setting of Picton harbour at the end of a deep inlet of wooded hills is reason enough to make the trip, but it is also the start of the Coastal Pacific train to Christchurch.

Before leaving, board the waterfront’s main attraction, the Edward Fox, an 1853 full-rigged ship built in what was then Calcutta and the only surviving Australian convict ship. In the museum beside the ship, I was enthralled by the detailed stories of the transported men, some for an offence as trivial as pickpocketing.

Between Picton and Blenheim, the line clambers over a ridge of thick forest interspersed with densely stocked sheep farms. As the sunshine capital of New Zealand, Blenheim is renowned for its market gardening and fruit, but it’s also home to the Omaka Aviation Heritage Centre, where Lord of the Rings director Sir Peter Jackson’s collection of First World War aircraft forms part of the sensational sets created by his WingNut Films.

The climb out of Blenheim once elicited cannon-like sounds from steam locomotives as they dragged trains to the Dashwood Pass, discovered by Sir Edwin Dashwood of West Wycombe Park, who was a sheep farmer near Blenheim. Bright green vines stand out against the yellow-brown soil of the rolling vineyards that stretch for 10 kilometres to the sea, forming part of one of the country’s premier wine-making areas.

Suddenly there were gasps of astonishment from passengers – what was that vast area of pink? Those who had seen the Red Sea recognised the naturally occurring algae that turn pink in the crystallisation process. Seawater pumped into Lake Grassmere and sun and evaporation work their magic to produce 130,000 tonnes of salt a year.

Tussock grass covered the dunes along the pine-fringed shore as we cantered beside the sea on the last stretch to Kaikoura, where I was breaking the journey to go whale watching. It’s an exceptional place for seeing sperm whales, as well as dolphins and fur seals thanks to the seabed Kaikoura Canyon, which funnels nutrients. Many species of sea-birds find easy pickings in the schools of fish, especially delicious crayfish, which are sold at open-air beachside eateries.

No boats had gone out the day before and there was still a swell that made the shoreline disappear from view. Films and an absorbing talk about migration patterns and lifecycles filled the half-hour motor to the area where a sighting was most likely, and we were soon filling memory cards with pictures of porpoises and a sperm whale spuming and flicking its tail fin as it dived. As exciting was watching the 'running on water’ take-off of a Gibson’s wandering albatross whose wing span can reach four metres.

The journey on to Christchurch continued alongside the Pacific Ocean before a great loop inland took the train through hilly country on a tortuous course around the contours and through many tunnels. Farms here were delineated by lines of poplars and huge yew hedges planted as windbreaks and only possible thanks to irrigation systems; the dry soil speaks of desiccating winds. Gradually the train descended to the coastal plain and a succession of dormitory settlements for Christchurch, their houses gazing out across the Pacific Ocean towards Chile, almost 10,000 kilometres away.

The most popular of KiwiRail’s trains is the TranzAlpine, and no wonder. It races across the country’s breadbasket, the Canterbury Plains, to reach Springfield, where a phalanx of snow-covered mountains can be seen ahead. In steam days, locomotives with more muscle were attached here for the long climb to Arthur’s Pass.

Snow-covered mountains forming the Southern Alps were seldom out of view, but it was the gorge of the Waimakariri River that held everyone enthralled. The railway provides a grandstand view into the sheer-sided ravine with the braided waters far below. Viaducts leap across tributaries as the train climbs to a plateau of tussock, gorse and watercourses lined with crack willow, used to make cricket bats.

The straight track allows the locomotive to pick up its skirts and fly across the rough grass, startling the odd lonely sheep. It’s desolate country, with no sign of habitation for kilometres on end, until we reached Cass, a sprinkling of buildings known to many Kiwis because a 1936 painting of its tiny station building by Rita Angus is held in the same regard as The Fighting Temeraire in Britain.

A 20-minute stop at Arthur’s Pass allowed everyone to stretch their legs. Arthur was Islington-born Sir Arthur Dudley Dobson, who led the first party of Europeans over the pass in 1864.

The small settlement is the highest in New Zealand, at 739 metres, but the only passengers who might break their journey here would be walkers or photographers. Arthur’s Pass National Park was the first created in the South Island and offers more than half a dozen tracks through beech forest and rainforest.

There are hikers’ huts in the park and a much more comfortable B&B in a former railway cottage in the village. Arthur’s Pass was a terminus until 1923, when the Otira Tunnel finally opened after 37 years’ work. Waterfalls generated power for compressed-air drills but completion was delayed by shale and rotten rock combined with miserable working conditions – Arthur’s Pass gets almost four metres of rain a year.

Gingerly descending the steep gradient through the tunnel, when no one is allowed in the observation car, the train finally reached the broad Grey River valley. Only cattle are seen west of the Alps because it’s too wet for sheep but this area was once dominated by coal mining. Some relics of the industry can still be seen around Dobson, where the town’s electricity was once generated by four U-boat engines received as war reparations.

West of Ruru the railway joins an estuary and follows the water to the sea and journey’s end beside the old harbour offices. These now house a restaurant and microbrewery where those returning to Christchurch can have lunch among the copper vats.

Others take buses or hire cars to travel along the Tasman coast. But the TranzAlpine is a journey that looks quite different travelling in the opposite direction, by which time the light has swung round.

And since you can only look out of the window in one direction at a time, who wouldn’t want to relish one of the world’s greatest rail journeys a second time?

This article was written by Anthony Lambert from The Daily Telegraph and was legally licensed through the NewsCred publisher network.

5 Ski Resorts With Both Sea & Mountains