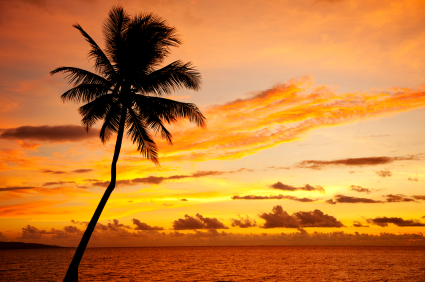 Fiji is a beautiful tropical wonderland, so it's no surprise it's caught the eye of many a film-maker from Hollywood and beyond. A number of movies have been set, or have had part of their story take place, in Fiji.

Why not have a holiday in Fiji with a difference by visiting some of these destinations? In doing so, you'll see some of the most spectacular parts of the country while also setting your sights on cinematic history.

Here are some of the most standout destinations to visit on your travels.

Some big films have been shot on the Yasawa Islands, dating right back to the 1930s. One of the most notable films, the 1949 flick the Blue Lagoon, was shot on the island of Sawa-i-lau. The story follows two children who are shipwrecked on a island. They grow up together and eventually fall in love amongst the lush tropical surroundings. Years later, a remake of this film starring Brooke Shields was filmed on Nanuya Levu in the Yasawas.

Indeed, the Yasawa Islands are renowned for their untouched beauty. There's less commercialisation here, making it an attractive destination for intrepid travellers.

One of the biggest films ever to be filmed in Fiji was Castaway, starring Tom Hanks. This was shot on the beautiful Monuriki Island, part of the Mamanucas group.

While many of the Mamanuca Islands are brimming with resorts and facilities for tourists, Monuriki Island is tiny and uninhabited, much like you see in the film. Surrounded by a gorgeous coral reef and lagoons, it's home to some pristine, white sandy beaches. It also hosts some incredibly rare wildlife.

You can take a guided tour to the island, where you'll be shown some of the most significant locations from the movie, and your guide will explain a bit about the 'making of'. It's interesting to hear how an entire film crew managed to get to the island and deal with the conditions!

You'll also have a chance to explore, swim and snorkel around the gorgeous islet.

In 1954, silver screen legend Burt Lancaster made his way to Fiji's main island of Vitu Levu for the film His Majesty O'Keefe. This shot in various locations around the island, such as Pacific Harbour.

This area is famed for its many adventurous pursuits, with activities such as shark feeding, off-roading and surfing popular. Natural, rugged beauty is abundant here.

The film Savage Island, starring Tommy Lee Jones, was also shot in this area, making use of its pristine waters and shores. Then there was even the 2004 horror flick, Anacondas: The Hunt for the Blood Orchid!

Suva has also been the backdrop for many films. Part of His Majesty O'Keefe was shot as the historic Grand Pacific Hotel, which stands on Victoria Parade. This hotel is now over 100 years old and is planning to reopen after extensive renovations and restorations this year.

The best of the rest

From Mr. Robinson Crusoe in the 1930s to the television show Survivor in the present day, a number of exciting things have been filmed in Fiji. With so much tropical wonder on offer, film-makers are sure to continue using Fiji's shores as a stunning backdrop.

Be a part of Fiji's cinematic legacy yourself by checking out some of these film locations, found in some of the most breathtaking locations in Fiji.

4 reasons to take a romantic holiday to Tahiti