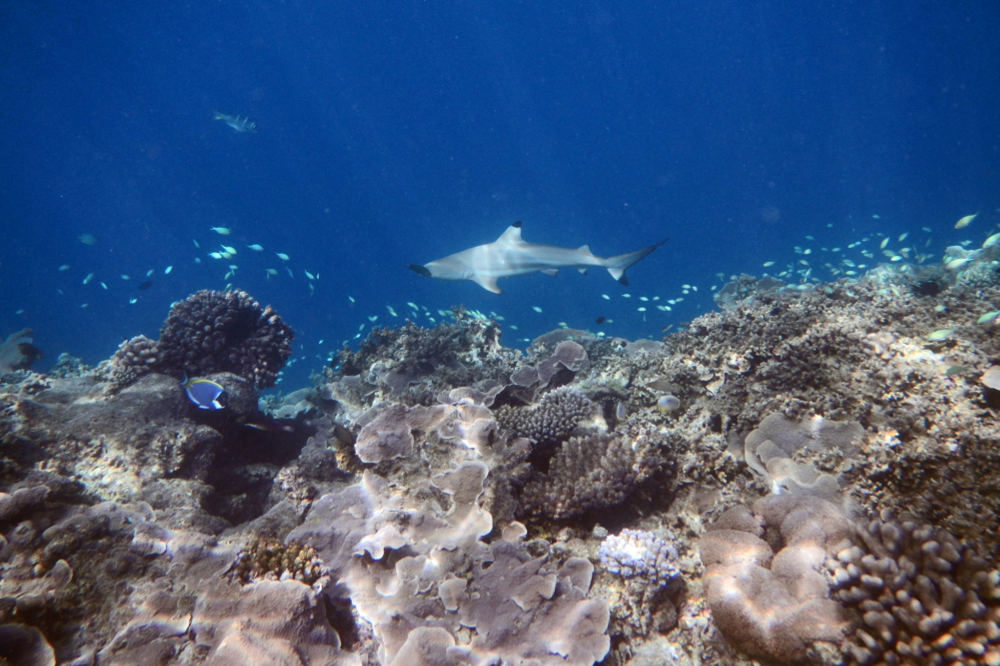 Shark Diving In The Maldives

The baby sharks that swam right up to the beach at Constance Moofushi were only a pre-show taster. What I was really there to see were the big boys, dozens of adult sharks in their natural habitat down on the sea bed.

As divers will know, it is not always easy to get down to certain patches of reef. Strong currents that stream through candy-coloured corals can blast you off course, leaving you pedalling alongside alarmed-looking fish, both of you hopelessly trying to get back to where you wanted to be.

Dive scooters can aid your progress and instructors at Constance Moofushi, on the South Ari Atoll, give lessons on using one. Non-divers might recognise them from James Bond’s Thunderball, where a gang of bad guys gives chase on larger scooters that happen to have harpoons attached.

Less cumbersome are the modern-day versions, which are light and torpedo-shaped, with a covered propeller at the back. I had a 20-minute practice session with one on the hotel beach, in shallow water marbled with confidence-boosting rays of sun.

Triggers in the handles set the rotor spinning at a constant, gentle speed. To be streamlined I needed to kick my legs back to allow the flow of water to wash beneath my body while controlling the scooter’s direction with my wrist.

Once I had a feel for it, it was easy. Moving forward smoothly, with my arms out in front, the scooter transformed my usual underwater profile – such poise, such grace!

It was time to go deeper. Shark Point is a dive site where sharks – 1.8-metre-long bruisers, some of them – congregate above a drop-off point, a kind of coral cliff edge. Using the scooters to pull us through a channel of strong current, there was not much to see apart from ever-deepening blues until an otherwordly formation of eagle rays suddenly glided by.

As the shadows cleared, beneath them were 10 to 15 reef sharks. Heads and tails twitching, they patrolled up and down the reef edge, on the other side of which lurked the gloom of an 18-metre abyss.

Cutting the propeller for a minute to watch, I counted about 20 sharks, jerking in and out of silver shoals of fish, their outlines smudging occasionally in the ribbons of current. The beauty of the site is that it feels like dropping in on a crossroads busy with all manner of marine life going about their business.

Eventually, we moved off, tracing the reef edge and watching over the hunt. As the traffic beneath thinned out, my guide, Christian, pointed out a three-metre-wide eagle ray spread casually across the sea bed, eyes flicking up at us through the sand, but otherwise motionless.

“Nothing to see here”, he might well have said, as we set a new course for the boat, gripping the handles harder so the scooters could power us back up to the sunlight.

This article was written by Natalie Paris from The Daily Telegraph and was legally licensed through the NewsCred publisher network.