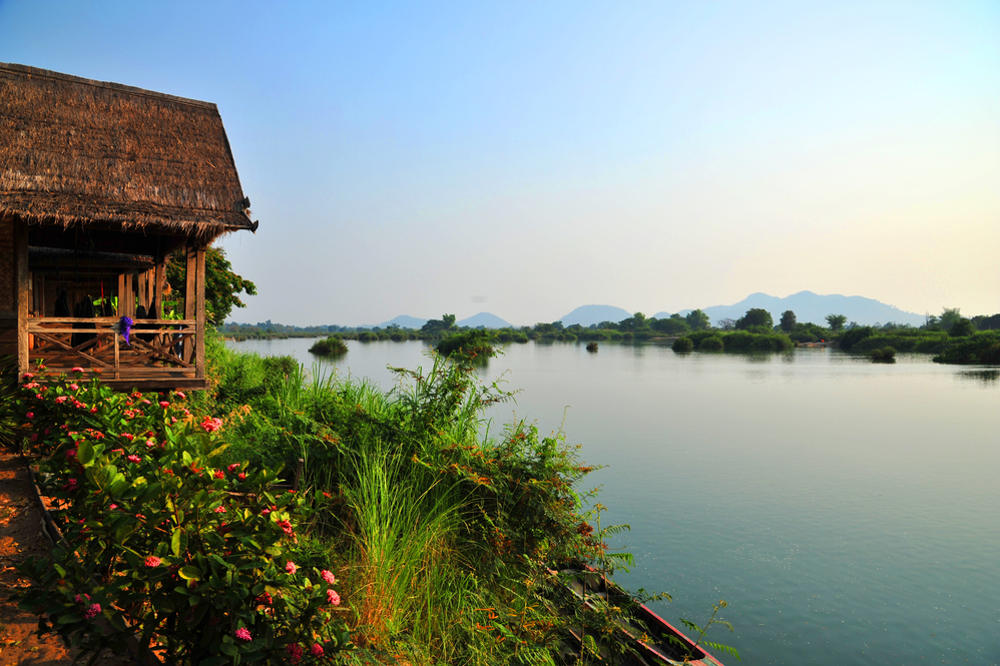 TRAVEL BLOG Southern Laos: Time Out In The 4,000 Islands

It is 6.30am and a bright orange sun is rising behind the mountains. The twin hulls of our boat cut through water that shimmers like glass. Fish jump and buffalo swim. Villagers brush their teeth at the water's edge.

It's another world, from another era, and I feel like Katharine Hepburn, except that my vessel is a raft strapped on top of two wooden canoes, on top of which, perching like thrones, sit two rattan chairs. It is a rather comical, W. Heath Robinson contraption, but that can't detract from the beauty of the scenery and the empty, peaceful atmosphere.

It would be nice to spend the day just sitting and floating but my destination materialises into view. Don Daeng is one of the many islands in the middle of the Mekong River, here in southern Laos where the river starts to widen.

It's February – hot season if I'm to believe my guide, who tells me that Laotian seasons are called rainy, hot and very hot. With every day already in the high 30Cs I'm just glad I'm not here in 'very hot'. But the island with its river breezes makes a very welcome break from the heat, and my delightful hotel, La Folie Lodge, has the only pool on the island.

Best of all worlds

I've travelled all over Asia but from the sanctuary of La Folie Lodge I almost wonder why I bothered. Here, in a relatively small area of southern Laos, I feel I've found a microcosm of the rest of the continent but without the crowds or the cynicism.

Here I've seen Khmer ruins to rival those in Cambodia, enjoyed the relaxed, beachy feel of Thailand, and learnt about a history that is just as brutal (if less well known) than that of Vietnam – and all this among the spectacular scenery characteristic of the lot – forests, waterfalls and mountains.

What I haven't seen, however, is hundreds of other Westerners, nor have I experienced the jaded, avaricious resentment of the locals that has come with the increasing development of those other countries.

In search of a 2,500-year-old mystery: Laos' Strange Plain Of Jars

Suddenly alone among the temples: Angkor Wat, Cambodia – How To Beat The Crowds

Time away from the mainland: Vietnam's Islands – An Escape To Peace

Grabbing a bike from La Folie's reception, I set off on a bone-rattling bounce around the island's dirt roads. Don Daeng has no motor vehicles, only a plethora of temples scattered among small villages where people live as simply as they ever did.

I pass fishermen flinging nets, farmers mending or manoeuvring tractors, and picturesque but rustic houses on stilts, which look like they've been tacked together using just panels of woven bamboo and a few sticks of wood. Hanging out in the shade below these traditional homes resides a muddle of pigs, chickens, buffaloes and children.

I found a similar raw naturalness everywhere I went in southern Laos, even in the towns. Pakse is the capital of Champasak Province, and the third-largest town in the country, yet remains laid back and relaxed.

It sits at the confluence of the Mekong and Don rivers and was founded by the French in 1905. There are a few colonial buildings left, some wonderful temples, and an incredible, huge market, but its main advantage is its location.

From here I enjoyed the varied delights of the coffee plantations of the Bolaven Plateau; an elephant sanctuary in a national park; and Wat Phu, a Khmer-era temple. This Unesco World Heritage Site gets a 10th of the visitors of Angkor Wat in Cambodia, and while it may not quite offer that level of grandeur, I nevertheless preferred being able to get a sense of the atmosphere without having to elbow my way through loads of tourists.

Further south, the Mekong expands to its widest – which in the rainy season can be as much as 14 kilometres across. This area is known as the 4,000 Islands, for self-evident reasons, and many of these islands are inhabited, and welcome visitors.

Don Khong (18 by eight kilometres) is the largest of all and is also a great place to spend a few chilled-out days. Here, on an early morning walk, I saw the wonderfully timeless sight of the local monks' dawn procession for alms.

Another bike ride revealed a scene that captured my attention for ages as I tried to work out what was going on. Family members were working together at what seemed to be a home-based factory production line, all in the shade of their stilted house.

One man was stirring huge vats of bubbling white liquid, another was rolling the sticky result out into a large flat white disc, while another was laying said disc out to dry on big bamboo mats. I thought it might be rubber and with no Lao, and they with no English, proceeded to enact a bizarre pantomime of trying to decipher its use, including me pointing to my bicycle tyre to see if my assumption was correct.

The reply to this was for one woman to break off a bit of the material and eat it. Not rubber then. I later discovered this was palm sugar, a staple export of the area. The casual, familial nature of the production line was delightful.

Stopping at a roadside bar for a drink, we again found no English spoken, and certainly no English menu. There are not many places in the world left where I've found that still to be true. Procuring a drink really was a case of going into the kitchen, opening the fridge, pointing, and hoping that the strange-looking bottle I chose wouldn't contain anything so strong as to preclude a safe cycle home.

Continuing my southerly trajectory, this time thanks to a local man who put his charming wooden boat at my disposal, I found myself on Don Khon, one of the livelier and more populated islands. I stayed just long enough to be impressed by its raging waterfall – the Li Phi Falls – before boarding yet another boat, this time a tiny canoe, on which I floated out to where a pod of the very rare Irrawaddy river dolphins are known to reside.

After a very short wait, the dolphins made their presence known by leaping and playing just metres from us. To celebrate this wonderful sight. we continued to the opposite bank and had a cup of tea in Cambodia.

This isn't an official crossing point, just a nice thing to have done – dear diary, today I canoed to Cambodia – but in fact one of the most striking things about Laos is how incredibly easy it is to get from here to any of its neighbours – Cambodia, Vietnam or Thailand. But then again, with so much here, why would you want to?

This article was written by Sasha Bates from The Daily Telegraph and was legally licensed through the NewsCred publisher network.

Freycinet Tasmania: Where Hiking Is A Luxury