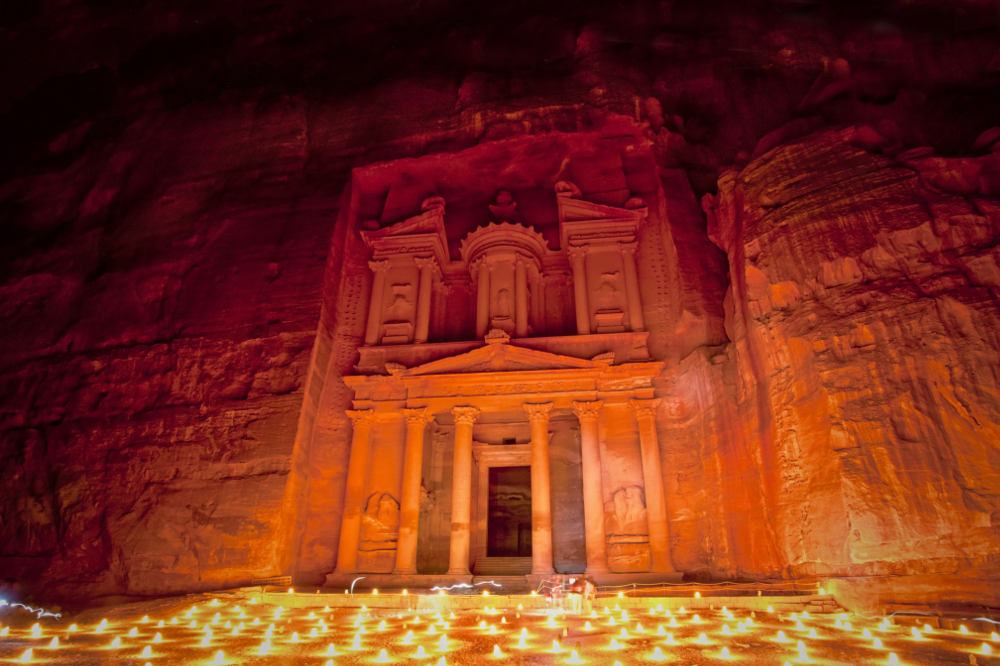 TRAVEL BLOG The Trip Of A Lifetime In Jordan

The Trip Of A Lifetime In Jordan

Sometimes, the name on the map is only part of the story. In the case of Jordan, it is barely a fragment.

True, this intriguing country has only been painted on to the global atlas since 1921, emerging as the Emirate of Transjordan in the wake of the First World War, before achieving full independence from British 'supervision' in 1946. But to view it as a 20th Century creation is to ignore the four millennia of civilisation that came before.

Every empire that has risen in the Middle East has, at some point, coveted and conquered the land east of the River Jordan and the Dead Sea, which makes up the modern Jordanian state. Egypt, Babylon, Persia, Greece, Rome, Ottoman Turkey – they all left their imprint.

The result, in the 21st Century, is a country as rich in heritage as any other not least because, for all the waves of invasion, the locals were gloriously productive. In the south, the Nabateans cut the city of Petra from the rocky Wadi Araba valley, possibly in the 4th Century BC.

And they were latecomers compared with the northerly Ammonites, whose key city, Rabbath Ammon, was in existence in 1200 BC, early enough to appear in the Bible. It is still there nowadays, as the increasingly vibrant Jordanian capital of Amman.

Add in the ruined Greco-Roman city of Gerasa, the desert vistas of Wadi Rum, the saline waters of the Dead Sea and the inviting Red Sea port of Aqaba, and you have a recipe for a holiday that mixes history and relaxation.

Nor do you need to cover epic distances to achieve this. At 92,300 square kilometres, Jordan is about the same size as Portugal. A drive from Irbid in the north to Aqaba in the south is a matter of 400 kilometres and five hours.

A glance at the map will show what every Egyptian pharaoh and Roman emperor knew – that Jordan is the crossroads of the Middle East. Its centrality is visible in its list of neighbours, sharing borders with Syria, Iraq, the Palestinian territories, Israel and Saudi Arabia, and being split from Egypt by just 13 kilometres of Israeli soil along the Gulf of Aqaba.

Sadly, in an era where the region has eviscerated itself, Jordan is a better and safer travel option than any of its neighbours.

Petra is Jordan’s A-list attraction, a 'lost' citadel whose prime landmark – the carved, colonnaded wonder Al Khazneh (The Treasury) – has illuminated countless documentaries and films. Familiarity does not diminish its majesty when you see it for yourself. Nor does the sheer weight of people who swirl around this surprisingly large ancient site.

The Nabateans’ finest achievement lies 240 kilometres south of Amman, within day-trip range, although Aqaba, 240 kilometres farther south, is also a solid base for a visit. A pretty port with a Mediterranean vibe, it takes up much of Jordan’s 25 meagre kilometres of coastline. It also deals in 5-star enclaves, such as the Movenpick Resort & Spa Tala Bay, which proffers a 150-metre private beach, massage treatments, scuba diving and double rooms with breakfast.

Aqaba has a place in British folklore thanks to the guerrilla heroics of Thomas Lawrence – Lawrence of Arabia – who, in July 1917, helped wrest the port from Ottoman control as the Arab Revolt brought the First World War to the ailing empire’s back door. Famously, Lawrence befuddled his enemies by sweeping into the city from the north, through Wadi Rum.

Further geographic splendour awaits on the country’s west edge, where the Dead Sea spreads its arms as part of the border with Israel. The lowest point on Earth, skulking at 427 metres below sea level, this lake of 34.2 per cent salinity offers reputed health benefits for everything from psoriasis to arthritis, although you may gain as much from a few days of stillness at one of its luxury retreats.

Amman is laid out across a series of hills. Slices of the past – Greco-Roman temples and an 8th Century Umayyad castle – await on top of Jabal Al Qal’a, the ancient core of the city.

Jabal Amman, the opposite 'peak', is rather more 21st Century, with restaurants and cafes strung along Al-Rainbow Street. Downtown Al-Balad is a haze of souks and shops, while Ras Al-Ayn has the new Jordan Museum, where exhibits include the Ayn Ghazal statues – doll-like human figures that may date back to 7700 BC.

Amman is also the gateway to Gerasa, 48 kilometres north in Jerash. This pocket of Greco-Roman antiquity greets visitors with the second-century Hadrian’s Arch and thrills further with its colossal Oval Plaza and Temple of Artemis.

Madaba, 32 kilometres south-west of Amman, is known for a 6th Century mosaic map that adorns the floor of the Byzantine St George’s Church and for the 817-metre Mount Nebo, from which Moses espied the Promised Land (modern Israel).

Eight Islands For Hire Around The World