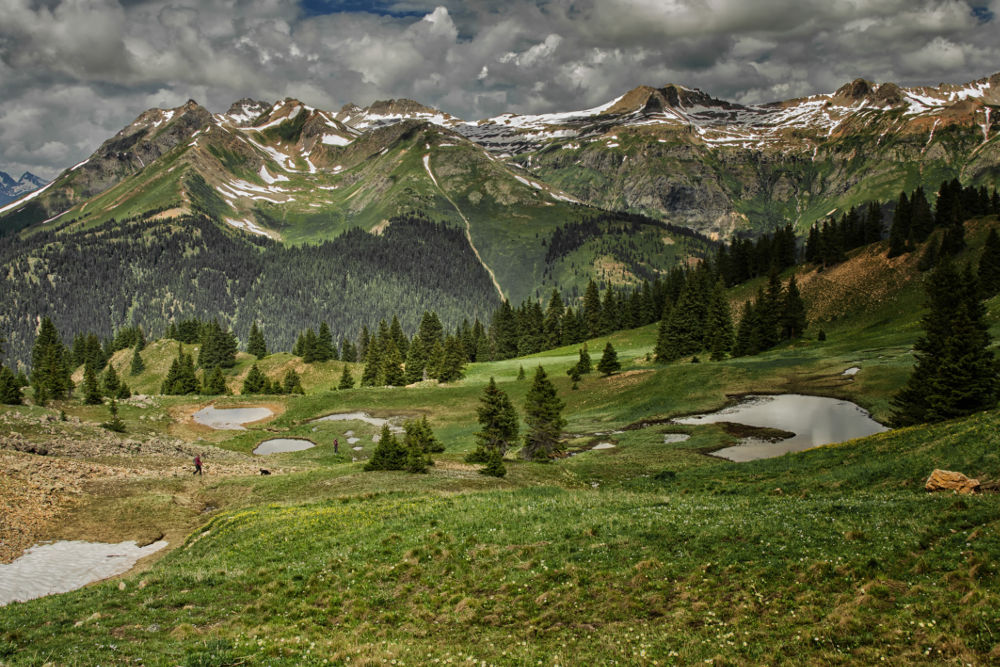 In 1873 – when Colorado was still only an informal 'territory' in North America – a 40-something British woman rode for 1,288 kilometres through the Rockies on her way home from New Zealand, consorting with pioneers, consumptives and desperados as she went.

The result was A Lady's Life in the Rocky Mountains, an instant bestseller at the time, and a classic of travel literature to this day.

In barely more than a week, I could hardly hope to match the adventures of Isabella Bird's timeless travelogue; and yet, emerging from the airport to catch the last sliver of pink sliding behind the darkening mountains, I was all set to try.

Comparing The Past To Now

Where the doughty Isabella had Birdie – "a bay Indian pony … with legs of iron" – my steed was a rather less picturesque Chevrolet Impala. And while Isabella arrived from Wyoming (courtesy of the train from far-off San Francisco), I began in Denver, no longer a "great braggart city" of the untamed West, but a pleasant metropolis.

The capital of what became the Centennial State was of little interest to the nature enthusiast Ms Bird. She dismissed it as tiring and confusing: "I would hate to spend even a week there." But I found the town well worth exploration, not least to get over the worst of the jetlag before heading off on the wrong side of the road.

Today's Denver seems to bear little relation to Isabella's descriptions. In fact, after two days of mingling with the promenaders on the 16th Street Mall, of wandering the sleepy suburbs of Highland with its clapboard houses and tree-lined streets, and of stumbling across live music and on-street art, I was smitten with the city's gently bohemian charms.

As a chance companion confided over an early-morning mimosa: "Colorado is like California, but with brains."

At first glance, then, there is nothing left of the place where, although "shooting affrays" were already rare, "the characteristic loafers of a frontier town" still abounded.

Scratch the surface, though, and perhaps the Old West is not so far beneath. Might Denver's profusion of microbreweries not be saloons reborn? Are the "purple" politics of the archetypal swing state – with its legal marijuana and optional motorcycle helmets – really so far from the early ranchers' ferocious independence?

It was the mountains, though, that were Isabella's primary goal. Even the vaguest approximation of her route must begin with Estes Park.

Now, the shallow valley is home to a buzzing tourist town, the gateway to the Rocky Mountains National Park. Back then, it was a Shangri-la so remote that it took Ms Bird several attempts even to find it.

"Never, nowhere, have I seen anything to equal the view into Estes Park," wrote Isabella when she finally made it. My own first impression was rather less edifying.

I was not unhappy to swap her "log cabin, raised on six posts... with a skunk's lair underneath" for the luxury of The Stanley Hotel. (It may have been the inspiration for The Shining, but I found it thoroughly friendly and comfortable.)

A stroll up the town's main thoroughfare, however, convinced me that nothing remained of Isabella's "perfection". What was once an escape from the world is now a riot of cars, crowds and tourist tat.

More epic treks in the world

On The Trail: 12 Apostles Lodge Walk

Tamed By The Rockies

There is no time for disappointment, though, with Longs Peak to climb. That Isabella made it to the top with no equipment and a long skirt is nothing short of remarkable.

Not being any kind of a mountaineer myself, it was a relief to find that, so early in the season, the 4,267-metre summit was inaccessible to novices. We would get as far as we could, though – my guide, Dan, assured me – and we would still see wonderful things.

And so we did, climbing steadily through sweet-smelling pine and out into a world of pink rock and stubborn snow that belongs only to the marmots.

On one side lay the peaks of the Mummy Range and the Continental Divide that slices all the way from Alaska to Tierra del Fuego. Ahead, the towering granite cliff of Longs Peak itself, less than a kilometre away.

It is a fearsome sight and looks laughably impassable. Yet now more than 10,000 people make the summit every year.

To hike Longs Peak is one thing. But to get right up close to A Lady's Life in the Rocky Mountains, only a horse will do.

"I live mainly out of doors and on horseback," Isabella wrote of her weeks in Estes Park. Much of her time was spent in the company of an infamous ruffian, "Mountain Jim" – a relationship that has been the subject of much speculation since.

It was quite a ride. From the high overlooks we could see over the forests and foothills to the plains beyond. And when we emerged from the trees it was into lush valleys with the weathered remains of homesteader cabins scattered amid stands of silver aspen.

"The scenery is the most glorious I have ever seen, and is above us, around us, at the very door," my predecessor wrote. It is as true now as it was then.

It was with a heavy heart that I left the following morning, retracing Isabella's route along what is now the US36 and, in five hours, covering a distance that took her and Birdie the best part of a week.

Influenced, perhaps unfairly, by her indictment of Colorado Springs – "To me no place could be more unattractive" – I stayed outside the town at Glen Eyrie, a railroad magnate's mock-Tudor "castle" which Isabella had also visited.

The baronial splendour of the house is certainly striking. But it is as nothing compared to grounds scattered with vast sandstone spires and ridges and inhabited by elk, wild turkey and bighorn sheep.

What I had not bargained for was that Glen Eyrie is no ordinary conference centre-cum-hotel; it is the headquarters of a Christian evangelical group, The Navigators.

Perhaps it should not be so, but to an avowedly secular person who has just driven for many hours on strange roads, two nights as the only unbeliever amid the faithful was a faintly intimidating prospect.

I skulked guiltily; I tried not to look sceptical. All of which proved unnecessary as no one showed any interest in either me or my views.

The purpose of my stay was a visit to the nearby Garden of the Gods, a 1,335-hectare geological spectacular left-over from some earlier Rockies long since eroded away. The park makes for impressive walking, the upended pillars, buttes and outcroppings like some great prehistoric spine sticking through the earth's skin.

Fresh from the cool trails above Estes Park it was all rather hot and crowded, though, and I had to concur with Isabella that it was a place where "were I a divinity, I certainly would not choose to dwell".

The final leg of the expedition was another grand drive beginning in Manitou Springs, a spa town still worth visiting for its weird-tasting mineral waters, hippie-ish shops and cog-railway to the top of nearby Pike's Peak. (It also offers the best crepe I have ever eaten – Coquette's somewhat unlikely, tuna- and wasabi-filled "Tokyo".)

But it is the journey beyond Manitou that will be my abiding memory of Colorado. Isabella made her trip alone, map-less, amid several feet of late-October snow.

Following the course of Tarryall Creek, she found the scenery "thoroughly wild" and only paused in her appreciation to note that when crossing one frozen stream the ice gave way, and by the time she found a cabin for the night, "my boots and stockings had frozen to my feet".

No such problems troubled my Chevy and me. But Tarryall Creek road is still off the beaten track through an out-of-the-way valley, some 60-plus kilometres of steadily climbing near-wilderness leading out into the astonishing loveliness of South Park, its horizons a ring of snow-streaked mountains.

By the time I hit the US85 – today's version of the old stage road back to Denver – my heart was as light as the thin mountain air. It was a fitting conclusion to more than 1,000 kilometres in Birdie's hoofprints.

Isabella wrote lovingly of Estes Park – "in the blue hollow at the foot of Long's Peak, I have found far more than I ever dared to hope for". For all the 21st-century bustle, travelling in modern Colorado is not so different after all.

This article was written by Sarah Arnott from The Independent and was legally licensed through the NewsCred publisher network.