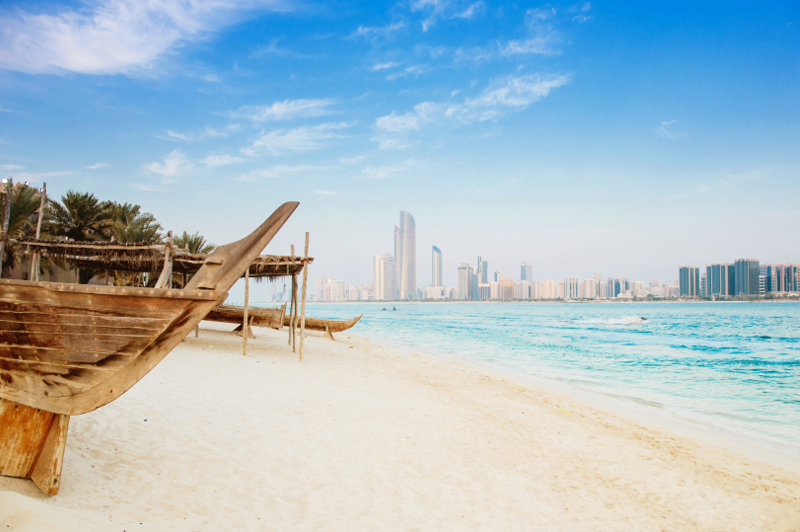 When thinking of Abu Dhabi, some may think of vast undulating sand dunes that stretch as far as the eye can see or the extraordinary green oases that magically appear. Others may think of the extremely luxurious hotels and resorts that are more affordable than reason would suggest. But it’s those in the know that think of the spectacular beaches and 200 majestic natural islands that line the 700 kilometres of Abu Dhabi’s coastline. With the annual average temperature of 28 degrees and virtually no rain, Abu Dhabi may just be the perfect luxury beach holiday destination. Who would have thought? Here are a few ideas to get you started.

Looking back to the Abu Dhabi skyline. Image: Getty

The private island resort of Zaya Nurai Island is like something you’d imagine in the Maldives with its spectacular white sand and shimmering azure water. And this is what’s so surprising about Abu Dhabi - there are so many of these secret gems. Zaya Nurai Island was conceived to provide a sanctuary for extremely discerning individuals. The founder sought to, and succeeded in, creating a truly nurturing living space to nourish the mind, body and spirit. Zaya’s ethos is to encourage guests to relax, enabling them to fully immerse themselves in enjoying the beauty of life and prioritising what really matters. 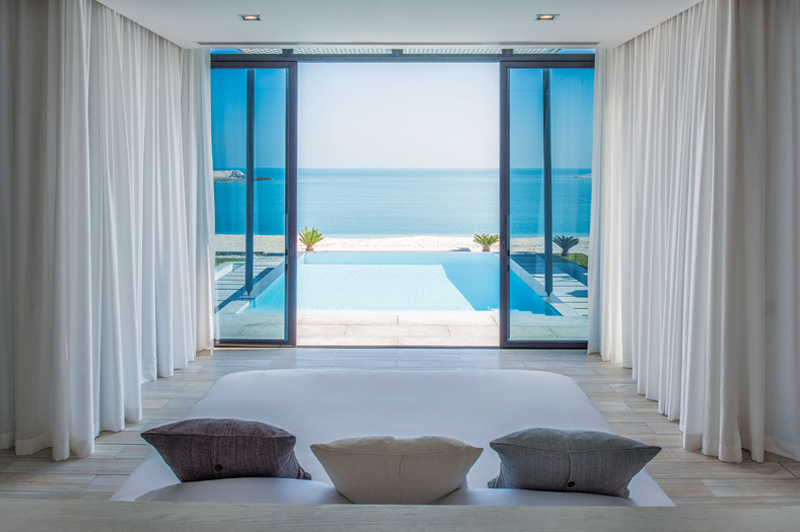 Zaya Nurai won Best Small Hotel in Arabia at the International Hotel Awards in 2016 and Zaya Nurai Island was recently included in Conde Nast Traveller UK’s list of The World’s Most Incredible Private Islands. As soon as you step onto the sand at Zaya, you’ll instantly understand why. The 32 beach villas, retreats and estates are impeccably laid out, the food is deliciously healthy and there are activities galore, such as yoga, snorkelling or personal training via your own bespoke gym program by resident trainers. Cap your day off with a magnificent evening meal in one of the fabulous restaurants or a movie in the open-air cinema. 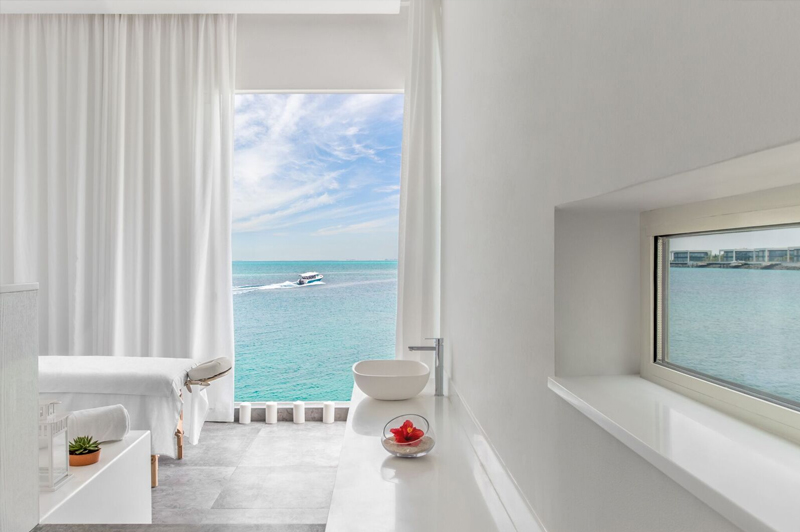 The 32 beach villas, retreats and estates are impeccably laid out, the food is deliciously healthy and there are activities galore, such as yoga, snorkelling or personal training via your own bespoke gym program by resident trainers. Cap your day off with a magnificent evening meal in one of the fabulous restaurants or a movie in the open-air cinema. Nurai Island is only a ten-minute boat ride from Saadiyat Island, which is only 20 minutes from the airport so your private island escape is remarkably close, despite feeling a world away.

If you plan on doing a lot in Abu Dhabi and would prefer being on the mainland, then Saadiyat Island can offer you a fantastic beach holiday. This stunning nine-kilometre stretch of natural beach boasts a number of seriously luxurious but affordable hotels and dining hotspots including the St. Regis Saadiyat Island Resort, the Park Hyatt Saadiyat Island and the enticing Saadiyat Beach Club. Saadiyat Beach is renowned for its gorgeous turquoise water brimming with fish and marine life. Dolphins and whales are regular visitors to the coast of Abu Dhabi, which are often visible from the shoreline as the warm, sandy shallows of the Arabian Gulf are favoured by the Indo Pacific humpback dolphin and the rare finless porpoise. 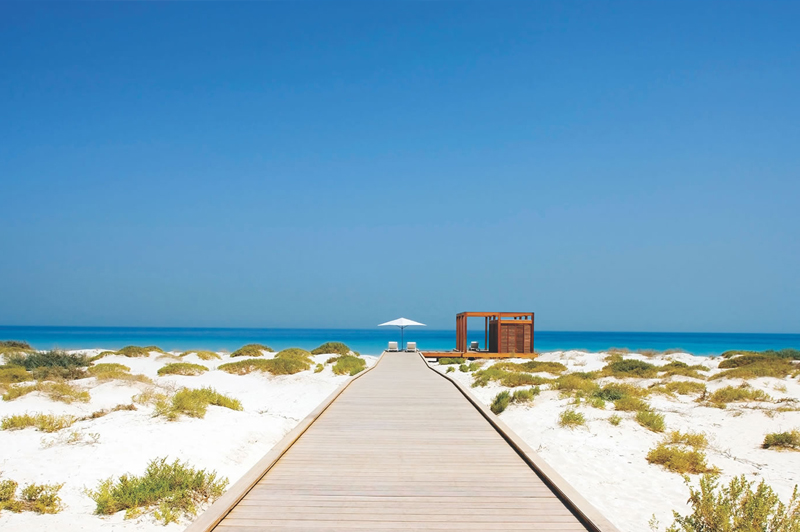 Saadiyat Beach isn’t just a favoured beach retreat for savvy travellers; it is also a chosen nesting place for the fascinating Hawksbill Turtle. The Park Hyatt and St. Regis both have resident Marine Biologists on staff to teach guests about these remarkable creatures that travel vast distances to nest on Saadiyat Beach. If you are lucky enough to be visiting during the turtle breeding season of April to August, you can get involved with the turtle program and maybe even witness baby turtles making their way to the ocean for the very first time! The Saadiyat Beach Club is a fantastic way to while away the jet lag either by dozing on one of the private cabanas that seem to float magically above the shimmering pool like miniature islands, dining in their exquisitely situated al-fresco restaurants or having a spa treatment in the luxurious spa. Popular with sun seeking Abu Dhabian’s, the Saadiyat Public Beach also offers all the trimmings of a luxury beach resort at a fraction of the cost. 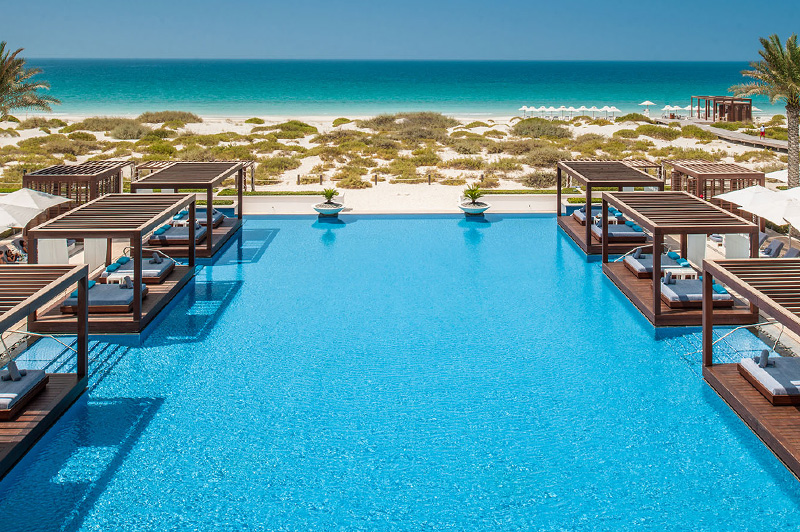