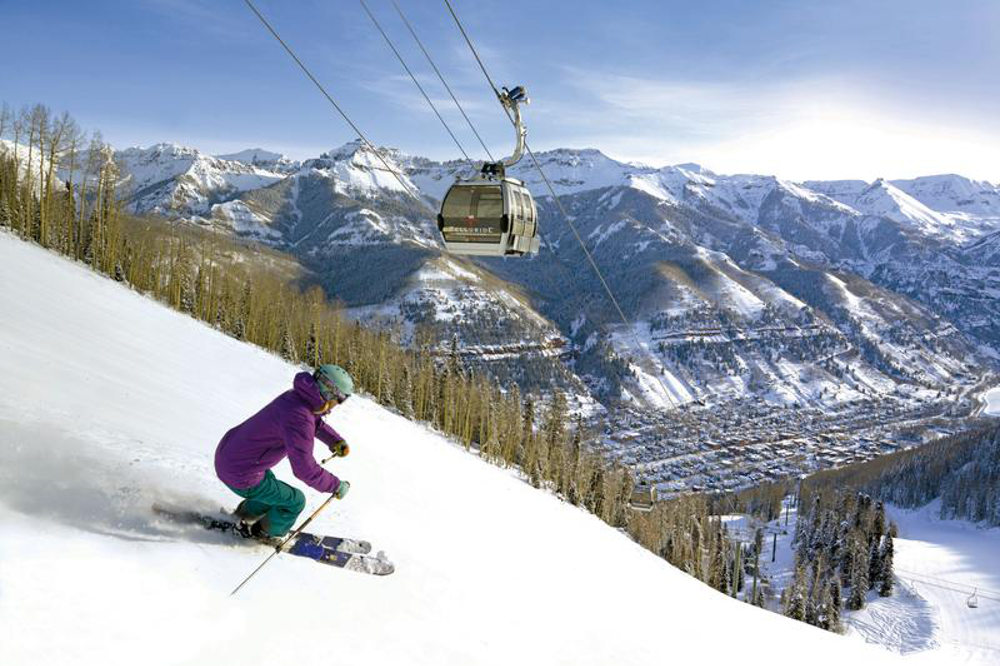 When people find out I'm a travel writer, the next question is almost always: "What's the best place you've ever been?" It's tough to answer because, obviously, any trip depends on the season, the reason and one's companions.

But if there's any one place I might call my favourite, it would probably be Telluride, a remote former mining town tucked in a majestic box canyon surrounded by 3,960-metre and 4,270-metre peaks in southwestern Colorado's San Juan Mountains. I first fell in love with this US town nearly 20 years ago, when a good friend who had just bought a place there invited me and a few others out for our annual girls' ski trip.

It immediately became our ski resort of choice, thanks to wide-open slopes, stunning views, lack of lift lines and often more moderate temperature and sunny skies than Colorado's more northern slopes. And while some of the women missed the more vibrant nightlife of Vail and Aspen, I love the more low-key, you-can-wear-jeans-anywhere atmosphere.

For me, as an intermediate to expert-level but admittedly fair-weather skier, Telluride offers everything I could ask for. Lots of sunny, warm days and diverse terrain, but never the crowds of sometimes out-of-control skiers who can dampen a day on one of Colorado's larger and better-known mountains along the crowded Interstate 70 corridor west of Denver.

In the years since my first visit, I have returned for much more than skiing. I've hiked the scenic mountain trails, attended an impressive line-up of outdoor summer music festivals that attract campers and luxury guests alike and learned to fly fish in the San Miguel River. I even got remarried there, in my jeans, next to a waterfall in a city park at the base of the canyon as a summer thunderstorm rolled in.

Of course everything has a tradeoff. And in this case, the tradeoff is getting there — unless, of course, you have a private jet to take you right into Telluride's general aviation airport. Telluride is a good five or six-hour drive from Denver or Albuquerque.

The closest commercial air service is to Montrose, which from many major airports still requires a commuter jet connection and then a one-and-a-half to two-hour drive, depending on weather. But there are shuttles to be had.

And once you get there, no vehicle is needed if you are staying right in the town or the adjacent Mountain Village. A free high-speed gondola connects these two very walkable towns.

Best of both worlds: 5 Ski Resorts With Both Sea & Mountains

What I like most about Telluride is that it's a real town, with real history and a genuine small-town feel, not a manufactured Alpine village full of pricey designer stores. Weathered mining ruins still dot the mountainsides.

And its many independent merchants, restaurants and art galleries help maintain its historic and funky vibe. There is a tasteful mix of condos and mostly small, independent hotels, including the historic Grand Sheridan on Main Street, which also houses a popular bar and Chop House.

But what really makes this town are the 100-plus-year-old Victorian homes that line the streets. Most have been tastefully restored and expanded to meet the demands of modern travellers and second-home owners.

Much of the ski resort and its more modern sprawling condominium complexes and multimillion-dollar homes are in the adjacent Mountain Village, which rises above Telluride to the southwest at an elevation of nearly 3,050 metres.

Despite the pet, ski and bike-friendly gondola connection, the village has struggled over the past decade to reach its full potential. From one year to the next, it has been a guess to see which restaurants and retailers have survived.

But the opening a few years ago of the luxury Hotel Madeline and its accompanying restaurants, bars, retail and adjacent ice skating rink has re-energised Mountain Village. New Telluride Ski & Golf Resort CEO Bill Jensen says the company, which still owns prime parcels of real estate in Mountain Village, is hoping to finally turn the corner on taking things to the next level.

Madeline, which has gotten some good press from top travel magazines, offers ski-in, ski-out accommodations starting in the $US300-500 ($A430-715) range nightly for winter weekends, is pet-friendly, has an onsite spa and is trying to encourage guests to check out summer and fall stays, too. Jensen says his goal is to tap into the momentum that the Hotel Madeline has brought and attract more retail, perhaps another luxury hotel and more condominiums while upgrading ski lifts, ski runs and making improvements to the golf course.

The resort recently also recently purchased The Peaks Resort, one of Mountain Village's original luxury hotels but one that has struggled like other local businesses in recent years. At the same time, he said, there is strong commitment to staying true to the unique character of Telluride while exploring new ways to create a niche here, perhaps through an expansion of Telluride's annual film festival or the creation of summertime programs to bring in leaders on various issues.

"We don't want to be a mega resort," he said. "We want to maintain the soul and the character of the place. I don't think our business plan is totally focused on increasing skier visits. It's on increasing the quality of the experience."

This article was written by Jeri Clausing from The Associated Press and was legally licensed through the NewsCred publisher network.

A Perfect 24 Hours In New York

How To Cycle Europe Without A Leave Pass