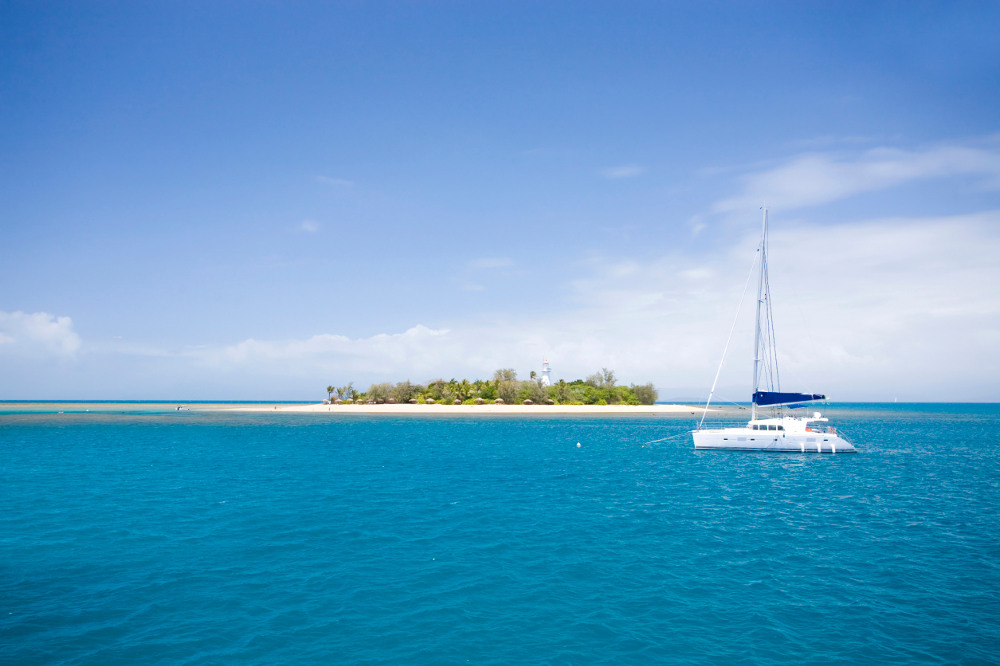 Arriving at the video facility near Cairns, Queensland, where scenes from Great Barrier Reef with David Attenborough were shot, I knew I was in the right place. There, behind Building E1 on the lush, tropical campus of James Cook University, a yellow sign bore the silhouettes of a shark, a crocodile and a poisonous box jellyfish – exactly the kind of line-up we have come to expect of the 89-year-old naturalist, whose latest series began last month. In a few days I would be out in the wild myself, following in Attenborough’s wake on a three-day diving trip to the Ribbon Reefs aboard Spirit of Freedom, one of Queensland’s most highly regarded liveaboards. This northern chain, beyond the reach of day boats, has some of the best dive sites on the Great Barrier Reef – a vast living structure the size of Japan, stretching for 2,250 kilometres and comprising 2,900 individual reefs.

Sharks, sea snakes and turtles would be likely sightings but first I wanted to learn more about the ecology of the reef on the underwater film set. Tank No1 looked like a swimming pool but contained “a living coral reef ”, including a leopard shark called Helga. "Riding a liveaboard is simply the most exhilarating way to go diving, packing in up to 26 dives in a week," said Richard Fitzpatrick, the cameraman and marine biologist who runs the facility. “Once animals are acclimatised, we can shoot them in the tank and it looks like they’re in the wild.” Part of the idea is to film coral spawning, sending fertilised eggs hundreds of kilometres to form other reefs – the “larval lifeboat” theory seen in the series.

Tank No2 contained mangrove roots, a nursery for juvenile fish, and even a baby crocodile. Next to it was a tub housing the crown-of thorns starfish, which is destroying the Great Barrier Reef by eating coral polyps – anemone-like creatures whose external limestone skeletons make up the reef ’s structure. Crown-of-thorns can grow up to 1.2 metres wide and weigh 75 kilograms, yet they can be scared off by a sentinel crab no bigger than a thumbnail, which attacks its soft undersides. Indoors were tanks housing wobbegongs, Nemo-like clownfish, mantis shrimps (capable of clubbing or scything small fish to death) and irukandji box jellyfish – the size of a grape but highly venomous. “And don’t mention seahorses,” Fitzpatrick groaned. For one sequence he sat by a tank for 72 hours to capture the moment a male gave birth to 350 young by squirting them from his abdomen. “I was exhausted but had to edit the footage – I passed out, fell off my chair and broke a rib.”

As further preparation for my trip, I headed to Reef Teach, an enterprise in Cairns that educates visitors about the marine life of the Great Barrier Reef. There, over tea and biscuits, a young English marine biologist called Abbie delivered a breezy talk packed with anecdotes. Passing around props such as coral, a stingray barb and a dried pufferfish, she told us to look out for the Barrier Reef ’s Great Eight: shark, turtle, manta ray, giant clam, clownfish, potato cod (giant grouper), Maori wrasse and whale – especially the dwarf minke whales that visit the Ribbon Reefs in June and July.

But the new series isn’t just about life underwater. The Great Barrier Reef also comprises 600 islands and 300 coral cayes, home to an extraordinary variety of bird life. Hence my day trip to the Low Isles, low-slung cayes accessible from Port Douglas via the 30-metre sailing catamaran Wavedancer III. Operated by Quicksilver, whose fleet of mini cruise ships deposits hundreds of tourists on the inner reefs each day, the yacht proved a stylish, if bracing, alternative as it surged along in a strong breeze under cobalt skies. Ashore, I met biologist Jenni Fox, who lives on the Low Isles with her husband, Wayne – sole human inhabitants, sharing a sandy islet with bridled terns, pied imperial pigeons and a pair of ospreys that have built their nest at the top of a Victorian-era lighthouse. As I toured the island with Jenni, first-time snorkellers in stinger suits (to protect them against jellyfish) circled the reef with a marine biologist.

Larger Quicksilver vessels are equipped with glass-bottomed boats, mini-submarines and bubble-like glass helmets fed by compressed air, for those who want to take an ocean walk on the reef without swimming. About 1.9 million people a year visit the Great Barrier Reef in this way, contributing more than $A5.6 billion to the economy and supporting 69,000 jobs. After a picnic lunch on the beach, I went snorkelling but saw virtually nothing in the turbid water, churned up by a week of storms. The highlight was a whitetip reef shark spotted from Wavedancer’s stern as we left.

On a mission: Australia's Best City Beaches To the Daintree! 10 Best Wilderness Holidays Castaway fantasy: 8 Islands For Hire Around The World

No pressure, then, on the liveried crew of Spirit of Freedom when I arrived by minibus from my Cairns hotel. Despite October temperatures in the high 20s, unseasonal storms had whipped up white horses, reducing underwater visibility. As the vessel left its mooring and headed for Norman Reef – where all 22 divers would complete a 'check dive' – the Coral Sea looked like the North Sea. For those unacquainted with liveaboard diving, this is how it goes: dive, eat, dive, eat, dive, eat, dive, eat, dive, eat and drink. On Spirit of Freedom, the day begins at 6am with coffee and a light breakfast served by the 'hostie', followed by the first dive at 6.30am. Kitted out by the crew and arranged in 'buddy' pairs, divers gather on the dive deck for a briefing by Rens, the trip director, before leaping off the stern and descending. After an hour underwater, they exit via a ladder, sign a dive log to show they are safe, ditch their gear and head to the saloon for a calorific breakfast cooked by the ship’s chef.

As they feast on bacon, eggs, sausages and hash browns, their air tanks are magically refilled by the dive crew, the most professional and safety-conscious I have met. Further dives take place mid-morning, followed by tea and Tim Tam biscuits; late morning, followed by lunch; 2pm, followed by afternoon tea; late afternoon, followed by snacks; and an optional night dive, followed by dinner (often an Australian barbecue of steak, kangaroo and crocodile) and the first permitted alcohol of the day – for me, a warming glass of shiraz. Divers retire to shared cabins and sleep while the boat steams into the night, arriving at the next reef by morning. It is simply the most exhilarating way to go diving, packing in up to 26 dives in a week (or in my case, 11 in three days) and living the life of an expedition diver, or indeed a BBC cameraman. At Norman Reef the dive was uneventful and the water choppy, but when we woke next day at a dive site called Steve’s Bommie, the skies had cleared and Queensland was looking more like it does in the brochures. Spirit of Freedom was anchored in pellucid aquamarine ocean at the edge of a reef fringed by a ribbon of surf.

Drama in the blue

Once beneath the surface, I was startled by the blueness of the water and the drama: a sleek grey reef shark out in the blue, surveying me with a beady eye; slow-moving shoals of trevally jack and barracuda; a cloud of golden goatfish, so vast – and so unfazed by humans – you could swim right through the middle of it; and the bommie itself, a coral pillar encrusted with Technicolor life, rising from the seabed below, which we circled as we slowly ascended in water so clear it induced vertigo. As the boat moved on, similar epic dives followed at Wistful Gardens, Flunker’s Folly, Gardiner’s Corner (where I dived at night, surrounded by barracuda and sparkling bioluminescence), Lighthouse Bommie (where a turtle surfaced at the end of our driftline and appeared to wait for divers) and Dynamite Pass (a fast drift dive, borne by a strong current through a channel frequented by sharks).

Whales eluded us, but the rest of the Great Eight were dutifully ticked off. For sheer indulgence, however, nothing could match the final dive: Cod Hole. Leaping off the dive platform, we were surrounded by dozens of red bass, muscular fish with snaggle teeth and a brusque manner. Below, a huge potato cod appeared, about 1.5 metres long, and nuzzled up to divers like a Labrador. Another giant arrived, followed by another – and then we noticed the whitetip reef sharks dozing on the sand before swimming off as we approached. Next came a pair of olive sea snakes, bewitching in their beauty, but venomous. As a growing cast of characters appeared, I didn’t know which way to look – and then, as we completed our first decompression stop, the friendly potato cod returned. It was a thrilling finale to my diving, but there was more to come. Leaving Spirit of Freedom, I disembarked at Lizard Island, a crucible of marine research featured in the series. There I boarded a Cessna light aircraft for the sunny one-hour flight back to Cairns. Flying low to prevent us getting the bends, our pilot set a course over indigo ocean, jade green reefs, surf-lashed headlands, golden beaches and sand spits where crocodiles basked. The documentary wasn’t over yet. This article was written by Andrew Purvis from The Daily Telegraph and was legally licensed through the NewsCred publisher network.