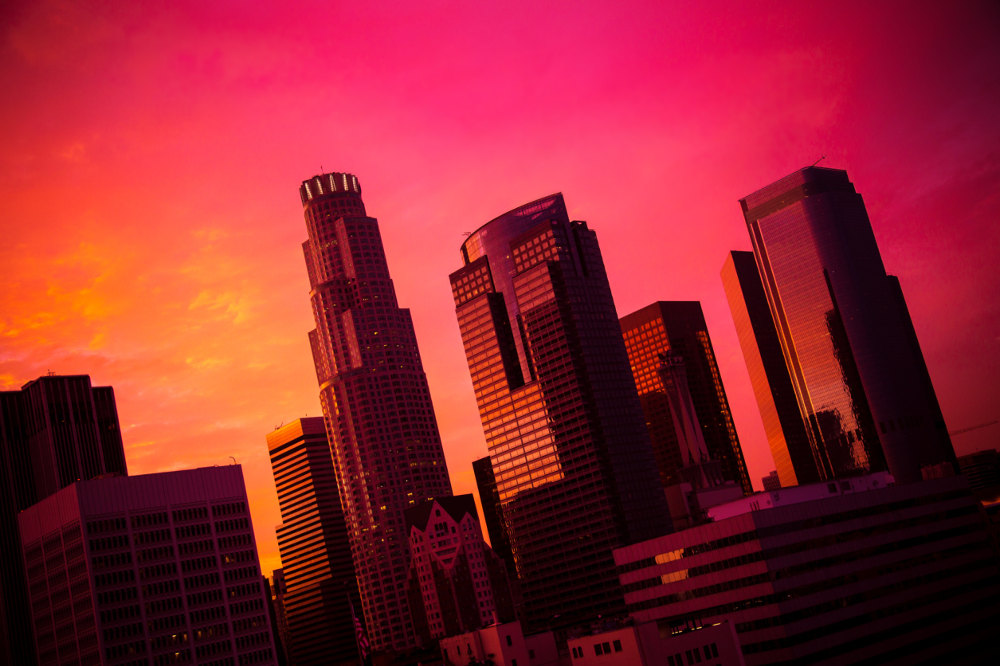 On the rooftop bar of the newly opened Ace Hotel in Downtown Los Angeles, I'm deep in conversation with Jesus. "Cocktail?" he asks, with deadpan delivery.

Without waiting for an answer, he reaches a hand into the folds of his flowing white robe to retrieve a black leather wallet. Kevin Lee Light (otherwise known as Jesus of Hollywood) has been dressing as the Son of God since 2005.

He was born here in the heart of Downtown – the oldest neighbourhood in LA – and is well versed in its noirish history. We talk about its Hollywood heyday in the 1920s and '30s, when Buster Keaton and Charlie Chaplin filmed here; about the grimy, crime-ridden side of Downtown, which captured the imaginations of Raymond Chandler and James M. Cain; and about its decline and virtual abandonment in the '60s and '70s.

"I had a loft space around the corner in the '80s," he says. "I would climb down the fire escape on to the sidewalk at night, and I would be the only person on the street."

Looking at Downtown these days, it's hard to imagine that it was once a ghost town. There have been more than 100 building projects in the past year, including The Broad, a vast new contemporary art museum. There are also plans for a subway station in the Arts District, a streetcar on South Broadway's burgeoning shopping strip and a light rail linking the city to the beach.

And it's not just new developments: Grand Central Market, built in 1919, has been lovingly refurbished, and many of the area's Beaux Arts and Art Deco buildings have been repurposed as loft apartments, restaurants and hotels. The Ace Hotel, where Jesus and I are busy swapping stories, is converted from the 13-storey former United Artists building, erected in 1927 by Chaplin, Douglas Fairbanks and Mary Pickford.

We've finished our drinks now, so it's time for Jesus and I to part company. There's a slightly awkward moment in the lift, when I can't think of anything to say.

"How old you are?" I ask, attempting to break the silence. Jesus laughs quietly, as if at some private, cosmic joke. "Eternal," he says.

Inspired by silent movie star Pickford's impression of Segovia Cathedral in Spain, the Ace Hotel  is a stunning piece of architecture in its own right, but it's the adjoining theatre that's the jewel in the crown. "We'd never seen another building like it," says Kelly Sawdon, the executive vice-president. "We were lucky that it was loved and taken care of for such a long time." Besides a busy music schedule, the Beaux Arts theatre also screen films.

"Bunker Hill is old town, lost town, shabby town, crook town," wrote Chandler in 1942's The High Window. Bunker Hill is just one of the noir-related neighbourhoods that can be explored on Esotouric's literary tours of Downtown and its environs.

Amid the glamour and gleam of Downtown's high-end development, it's easy to forget that the area is also home to some of the best dive bars on the planet. Take King Eddy Saloon.

Refurbished last year and decorated with murals of some of its most famous bar-proppers (John Fante and Charles Bukowski were regulars), this place has a lively clientele and a legendary jukebox. Talking over the pleasant din of Morrissey's Suedehead, I ask Frank, a local patron, if he ever met Bukowski.

This article was written by Edmund Vallance from The Independent and was legally licensed through the NewsCred publisher network.