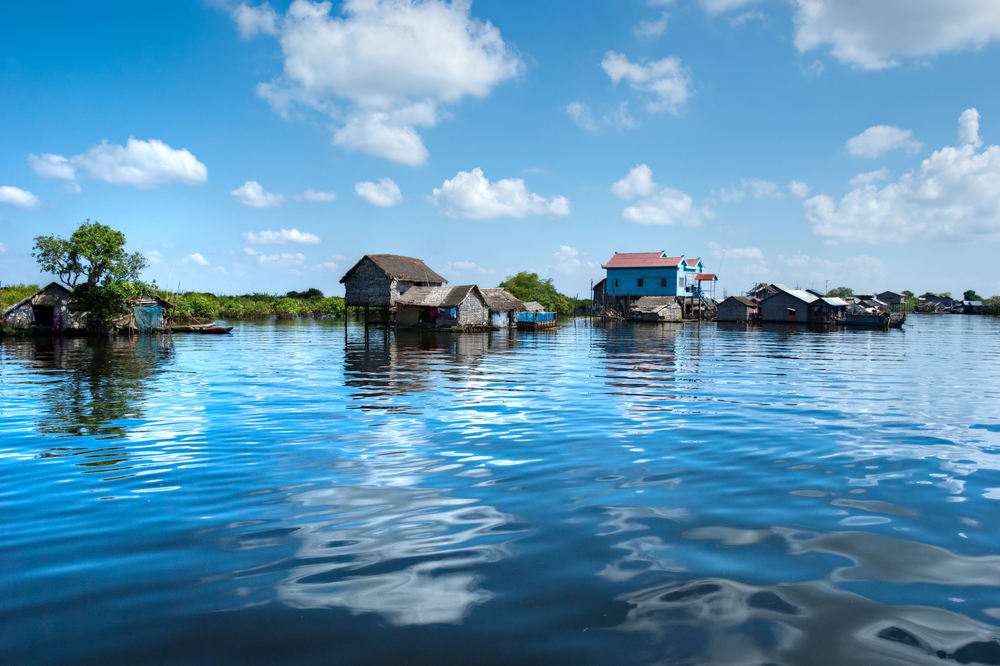 Exploring Cambodia & Vietnam From The Water

It’s hard to relax on holiday these days. There are any number of opportunities to pump iron on a boot camp, trek across the Gobi Desert or follow the latest app around a string of city museums.

But somehow, amid all this busyness, we seem to have lost the art of doing nothing. There’s one sure-fire way of switching off, though, as I recently discovered: sitting on the open deck of a boat travelling slowly downriver, listening to the chug of the engine, watching light play on the water and seeing life on the shores slip by.

I was on a Pandaw ship sailing down the Mekong river through Cambodia and Vietnam. While there were plenty of shore excursions, lectures and films to watch, I could quite happily have spent the full week of the trip just watching the world drift past, picking up a book from time-to-time, chatting to fellow passengers and sipping a cocktail as the sun dropped behind the palms and rice fields.

Most river vessels are built for optimum viewing. The entire top deck of the Mekong Pandaw is a wide, open veranda, shaded by large awnings, so you feel a part of the landscape as it rolls by.

Built in traditional style, the ship had varnished teak decks, white rails, wicker sofas and chairs, potted plants and 26 small but very comfortable ensuite wood-panelled cabins with shuttered doors opening on to river views. For modern comfort there were also sunloungers, mosquito screens, and – when aircon is necessary – glass doors to cabins and dining room.

It was a boat full of charm and restrained luxury, immaculately maintained by the delightful staff but lacking, thank heavens, the sort of in-your-face glitz that would have seemed so out of place on the Mekong. Our trip took us along the final stretches of the river, which rises high on the Tibetan plateau and coils down through South-East Asia until its great muddy delta spills out into the South China Sea.

Already, when we joined the boat at Kampong Cham, about three hours by road from Siem Reap, the river was beginning to sprawl, stretching to distant shores of low sandy cliffs, beaches, scrub and palm trees as it carved its way, fat and brown, through the countryside.

Eight days later, when we disembarked at My Tho in Vietnam, we were in the delta proper – the shores a distant green strip, the water stretching like a vast sea, flecked with white in the breeze. Barges chugged past, so laden with rice or sand that they were almost underwater, little islets of water lilies scudded along and there was a salty sea tang to the air.

But in between, as we sailed south to the Cambodian capital, Phnom Penh, the banks closed in around narrow channels. Children called and waved from villages and houseboats along the shore, small fishing boats phut-phutted past, the crew casting their nets.

Parents washed children at the fringes, farmers sluiced down their cattle and boys dived like porpoises. As palms gave way to lush jungly greenery, tributaries led off enticingly and the hazy mounds of hills rose on the horizon.

“This is like Heart of Darkness territory – or maybe Apocalypse Now,” said fellow passenger Rob, from Holland, as the sun slipped behind clouds and the Mekong snaked ahead of us in the silvery light. It felt as though we were travelling down a secret river – who knew what would be around the next bend?

All in all it couldn’t have been a more different scene from Apocalypse Now. Cambodia has come a long way since the dark days of the Vietnam War and the subsequent Khmer Rouge rule of terror in the late 1970s.

An estimated third of its population was killed then – chiefly educated Cambodians who were seen as a threat to Pol Pot’s regime. Teachers, doctors, artists, lawyers, diplomats – even those who could speak French or who wore glasses – were eliminated.

But the country has made a remarkable recovery – and nowhere is this more evident than in Phnom Penh. We emerged from a screening of The Killing Fields in the boat’s little cinema to find that we had moored up on the capital’s waterfront.

Lights from office blocks twinkled across the water and tuk-tuks veered around giant potholes on the promenade. Large black 4x4s sat outside sleek restaurants and hordes of self-conscious British gap-year students milled around aimlessly.

The next morning we were taken around the city by cycle rickshaws, feeling like potentates as we were peddled from the ornate Royal Palace, to some wonderful early sculpture in the National Museum and to the fake watches and bags being sold at the Art Deco central market. Central Phnom Penh seemed an atmospheric, good-natured place with some elegant if dilapidated streets of French colonial houses and parks busy with joggers, kick boxers and yet more groups of gap-year travellers.

Until this point our shore excursions had been gentle and low key – which suited us just fine as we’d started the trip in Siem Reap with some intensive sightseeing among the magnificent temples at Angkor, one of the greatest ancient sites in the world.

Our forays ashore had taken us to see Buddhist monks at hilltop Wat Hanchey temple and to the twin holy mountains of Phnom Pros and Phnom Srey, with panoramic views of the Mekong and surrounds. We’d had a beautiful early morning ride in an ox-cart through impossibly green rice fields to Kampong Tralach pagoda, accompanied by a posse of local children practising their English.

But at Phnom Penh the visits to the Killing Fields memorial of Choeung Ek and the S-21 Genocide Museum, a detention centre under the Khmer Rouge, were of a different ilk. Each place tells the story, movingly and horrifyingly, of the terrible Khmer Rouge years.

Not everyone on board felt up to joining this trip, but I was glad I went. It seemed important to learn about and acknowledge what had happened here just a few decades ago.

Back on board, the mood was lightened by children from a local orphanage who put on a show of traditional dancing for us. It was a skilful and charming performance – and the children seemed to be genuinely happy and well cared for.

Pandaw had taken great care to find a reputable, well run orphanage, our manager Neville explained – important since child exploitation is a problem in Cambodia. It is this attention to detail, seen in everything from the design of the boats to the delicious food, that accounts for the company’s high level of repeat business.

In fact the only fly in the ointment was our Cambodian guide, who worked dutifully but was almost impossible to understand. But then, we came to realise, he had been a boy when the Khmer Rouge seized power. There would have been no schools and no teachers for him; he was almost entirely self-taught.

A Vietnamese guide joined the ship as we crossed the border, and provided a fascinating insight into the country’s history, the Vietnam War, the continuing power play in the area – and the intricacies of Chau Doc floating market, our first port of call in Vietnam. There each boat hoisted its produce up a pole: so instead of an ensign, a water melon, sweet potato or bunch of bananas bobbed aloft.

He was on hand, too, at the delta town of Sa Dec, taking us to the busy riverside market selling lotus stalks, rose apples, neat little fillets of skinned rats (squeals of horror all round) and buckets of slithering eels. Sa Dec was our last port of call, and as we watched the evening sun cast a golden stream across the delta there was genuine sadness on board at leaving behind the gentle rhythm of river life.

By then our group of about 40 passengers – from Australia, North America, Thailand and numerous European countries – had become firm friends.

The staff put on a great farewell concert, we all danced under the stars, and when we came to disembark for the bus journey to Ho Chi Minh City, the nervous sideways glances of the first day had become hugs of genuine entente cordiale.

This article was written by Joanna Symons from The Daily Telegraph and was legally licensed through the NewsCred publisher network.