For a relatively small country, England packs a punch when it comes to tourist hotspots.

Thanks to lovingly preserved tradition and a history that dates back so far that it’s hard to comprehend, the English countryside is crammed with delights. An exploration down an insignificant backroad can reveal an ancient church just as easily as a whimsical English pub.

The following highlights should be on all backroads tours of England, so add them to your map and get ready for them to charm your socks off. 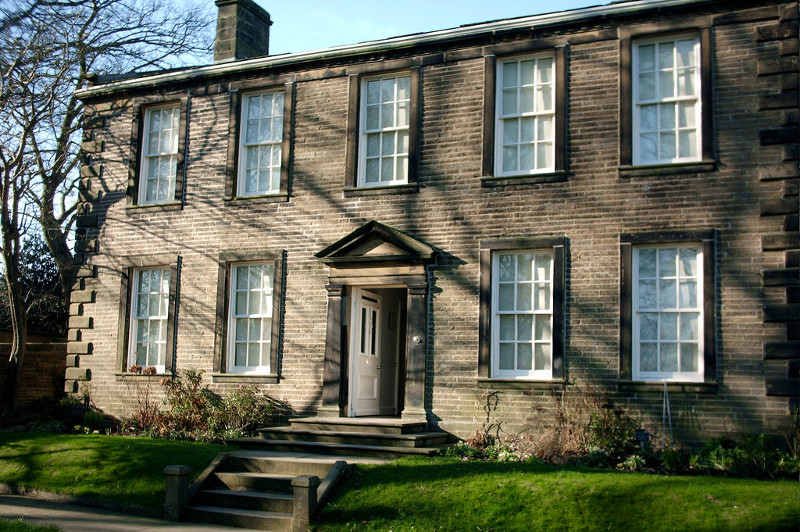 To create a museum, Sir James Roberts purchased the parsonage from the church in 1928 for 3000 pounds

If you were ever enchanted by the story of Jane Eyre or engrossed in the tale of Cathy and Heathcliff, then a trip to the Brontë Parsonage is a rite of passage on any backroads tour of England.

The home of the Brontë family between 1820 - 1861, this house-turned-museum is where Charlotte, Emily and Anne wrote their most famous novels. Fans of the sisters’ writings will not be surprised to learn that the house is set on the moorlands, an environment that strongly flavoured the Brontë’s writing.

The Brontë Parsonage Museum has the world’s largest collection of manuscripts, letters and early editions relating to the Brontë sisters work. The charitable society that maintains the parsonage hold regular workshops, concerts and exhibitions to help visitors of all ages connect with the magic literature of the Brontës.

The Pudding Club, The Cotswolds

The Cotswolds are a gorgeous tangle of historic hamlets, mist-shrouded hills and enticing country lanes. Could there be any better place to celebrate the indulgence of the English pudding?

The Pudding Club was opened over 30 years ago in an effort to preserve the great British puddings that were becoming increasingly hard to find on menus around the country.

A light meal is served before things get down to business, but only rookies fill up on savouries. The main attraction is the challenge, which is to eat all seven puddings on offer - but only one at a time. You can’t dish yourself up the next offering unless you’ve finished your current serving. If you are successful in devouring all seven, you walk away with a certificate, a true sense of accomplishment and a bursting belly, ready to continue your backroads tour of England.

From spotted dick to passionfruit charlotte, the menu is so mouthwatering that finishing all seven puds is a common occurrence. Arrive hungry so you can keep up with the locals! 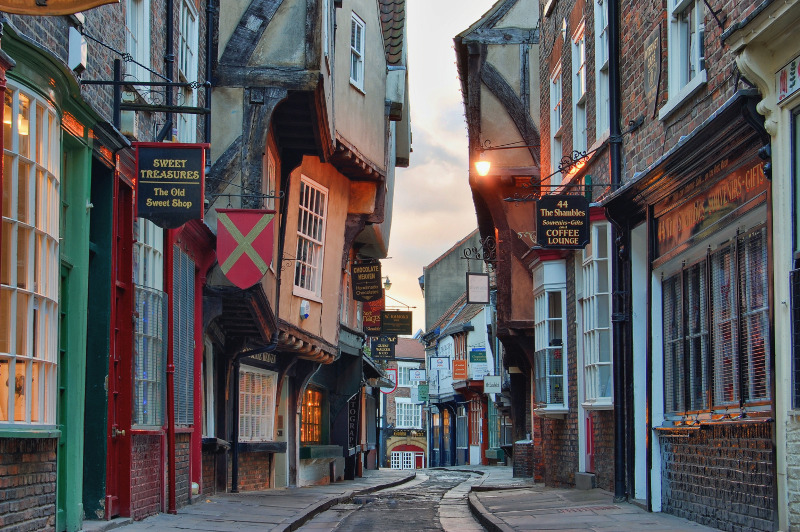 The name 'The Shambles' is thought to originate from Old English 'schamil', meaning table or stall for vending

Ancient, narrow and gloriously preserved, The Shambles is a poky lane in York that is overhung by timber-framed buildings dating back to the fourteenth century. It was once lined with butcher’s shops, but is now filled with quaint cafes, quirky boutiques and the occasional English pub.

In some parts of The Shambles you can reach out to touch both walls simultaneously, as the lane was designed to be as slim as possible to protect the butchers’ wares from the sun. A stroll down this picturesque remnant of Old England is a delightful way to spend an afternoon. 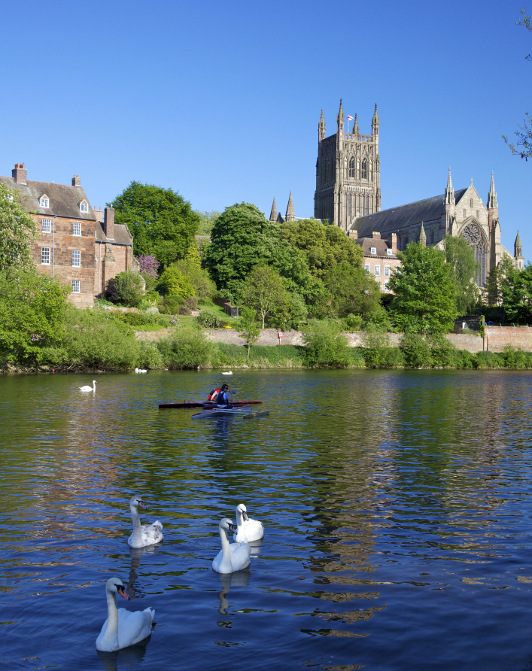 With origins that date back to 680 AD, Worcester is considered to be one of England’s most intriguing cathedrals. Not only does it house the royal tombs of King John and Prince Arthur, there is also a wealth of English Civil War history secreted within the hallowed halls. Explore a 10th century crypt and wander the medieval cloisters that were home to centuries of nuns and monks.

The library is a treasure trove of historical documents, and is especially famed for its ancient musical manuscripts. The soaring arches and magnificent stained glass windows are guaranteed to make your jaw drop as your eyes travel ever upwards to the exquisite paintings that adorn the ceiling.

Looking for somewhere to stay?: UK Castles Where You Can Sleep Like a King

More backroads tours of England: The Corners of Cornwall 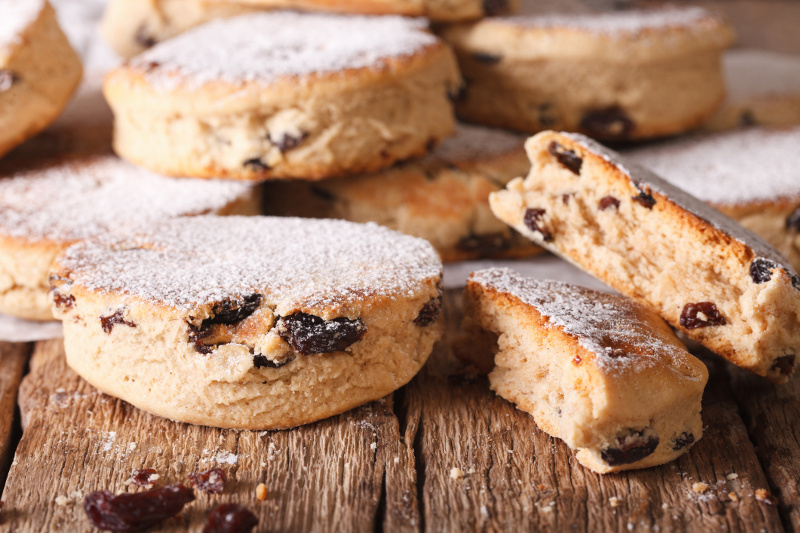 Once a lunch staple for workers in the slate mines, the Welsh Cake is now a signature dish of Wales

It's hard to stop yourself from dipping into Wales on backroads tours of England. Nestled in the world-famous scenery of Snowdonia, the Bodnant Welsh Food Centre is like a dream come true for culture vultures with foodie tendencies. Browse the farm shop, bakery or butchery for locally sourced, fantastically fresh goods, or get hands on with a cookery class or demonstration.

Of course, you can always sit back and let the food come to you. The Hayloft Restaurant prides itself on dishing up rustic Welsh food with a modern twist. Expect a profusion of delectable mussels, Welsh rarebit on sourdough and lamb Scotch eggs, but leave enough room for the famous Welsh cake. Hot off the griddle and sprinkled with sugar, it’s the kind of treat you can enjoy at any time of the day. 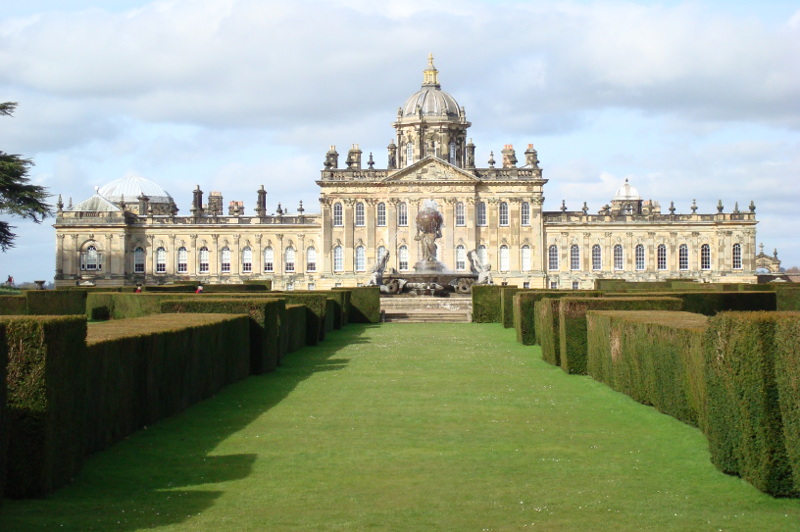 Fancy yourself as the star of a period drama? Castle Howard should be your go-to backdrop. Nestled in the greenery of North Yorkshire, this colossal mansion was the main filming location of the 2008 remake of Brideshead Revisited and also featured in the 2016 production of Victoria.

From sculpted gardens which meander to the shores of a mirror-surfaced lake, to the interiors preserved in all their stately glory, Castle Howard will fulfil every imagining you’ve ever had of the quintessential country palace.

Hill Top Farm is another literary gem that will enchant visitors with its irresistibly picturesque appearance. It’s easy to imagine Ms Potter penning the tales of Jemima Puddle-Duck while gazing out onto a verdant country garden where Peter Rabbit could pop out from behind a lettuce at any moment.

Hill Top was bequeathed to the National Trust, and the interior has been caringly preserved so that Potter fans will easily recognise touchstones from her stories, from the staircase and landing down to the coronation teapot on display in the parlour. 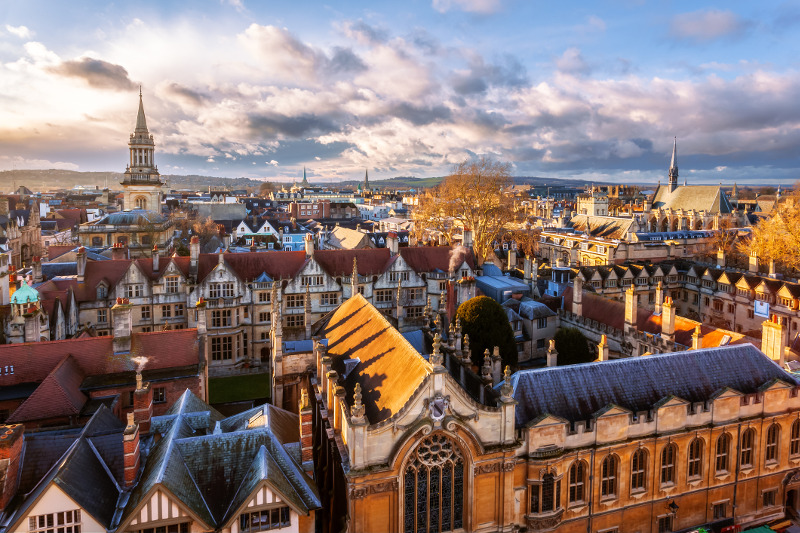 Hitler was intending to use Oxford as his capital, which is why it escaped bombing in WWII

With one of the world’s most famous universities at its heart, Oxford is rife with intriguing history. Walking through the ancient streets and wondering what secrets the majestic buildings might hold will never be as satisfying as hearing the juicy details from a knowledgeable guide.

For example, you’ll be curious to know the origins of the mysterious “no peel” that was burned into a door of the Great Hall at Christ Church in the 1800s. Legend has it that it was the manifestation of the students’ complaint against a supposed anti-plague diet of potato peels, but history has proven that it was a protest against Prime Minister Sir Robert Peel.

When strolling down town, look out for the cobbled cross built in to the centre of Broad Street. This marks the place where three Protestant bishops were burned at the stake by Queen “Bloody” Mary, a devout Catholic who sought to undo the work of her father, King Henry VIII. A guided walking tour is a must for anyone who doesn't want to miss the fantastic tales that this ancient town can tell.

These are just some of the stops on a Back-Roads Tours' Highlights of Britain adventure, designed to help you discover the true essence of England! Contact your local Travel Associates advisor to book backroads tours of England today.