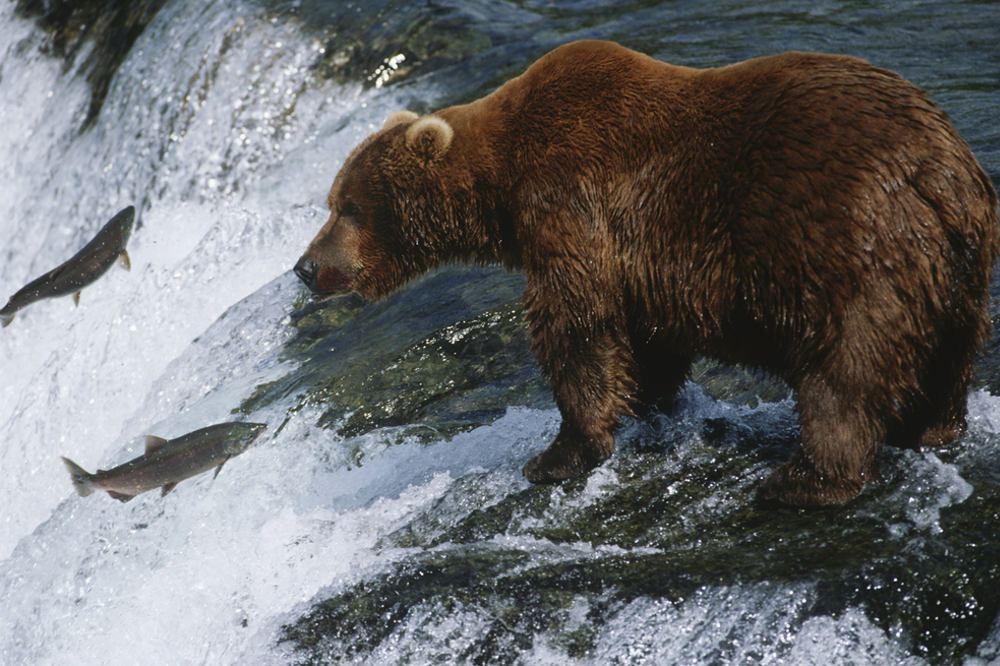 Winter comes early to Bear Cave Mountain. On the Fishing Branch River where the salmon spawn it is -14C. The ground I am sitting on is iron hard and I’m face-to-face with an apex predator – a mother grizzly bear with a yearling cub trundling behind her like a child’s outsized teddy.

Her broad back is white with hoar frost and icicles dangle from her belly. “Hi, Mrs Tucker, how’re you doing?” says Phil Timpany softly as she splashes past no more than three paces away, with hardly a glance in our direction.

Timpany, the resident guide at Bear Cave Mountain Lodge, is the bear-whisperer of North Yukon, Canada. He is to grizzlies what George Adamson was to lions and doesn’t even carry a can of pepper spray – the most popular bear deterrent. His weapon of last resort is a 12-gauge pump-action shotgun, but in all his 22 years at Bear Cave Mountain he has never had to use it.

Instead he lets the bears call the shots. “It’s so easy to deal with these animals,” he says, in his quiet voice with its warm John Wayne twang. “It’s very simple. Rule one is always let the bears decide how close they want to come. Rule two is never ever retreat. Grizzly bears are predators and will react immediately if they see you running.

“So I let the bears make the decisions. They are really intelligent animals and invariably will make the right decisions, which are the same as the ones they make when meeting other bears.”

Bear Cave Mountain lies within a snowball’s throw of the Arctic Circle in the Fishing Branch Protected Area, where the Vuntut Gwitchin First Nation and the regional government have joined hands to set aside 6,475 square kilometres of pristine wilderness as Yukon’s largest territorial park. Coming here is a rare privilege. In this land held sacred by the Vuntut Gwitchin, the importance of salmon and grizzly bears is paramount, and visitor numbers are restricted to no more than a handful at any one time.

Set in an area the size of Switzerland with only 350 inhabitants, the park is unbelievably remote. To get here I flew north from Vancouver to Dawson City, home of the 1898 Klondike Gold Rush, where the streets are still made of pay dirt and permafrost and the wooden buildings with their false fronts and boardwalks look like a spaghetti western film set.

From here, the only access to Bear Cave Mountain is a two-hour helicopter ride across a far-reaching emptiness of deep-frozen rivers and boreal forests bounded by range upon range of chaste white mountains rolling north to the Beaufort Sea. On we flew, across a desolation of snow-covered tundra known only to migrating caribou and the wolves that follow them, until at last we touched down on the stony shores of the Fishing Branch River to be greeted by Timpany and Smoky, the Norwegian elkhound who is his only companion for much of the time.

Remote and rewarding: In Search Of Polar Bears In Canada's Arctic

When bears and people mix: Living With Predators In Canada

Accommodation is backwoods basic. The only loo is open to the four winds – although at least it has a warm styrofoam seat; but you sleep soundly in snug log cabins with wood-fired stoves that guarantee warm-as-toast nights, and Timpany, who does all the cooking, is a dab hand at producing sensational steaks and casseroles.

But 5-star comfort is not what you come for. The real luxury is the best bear watching in North America, with a chance to get to know the animals as individuals in the company of the Yukon’s most charismatic guide.

The season is short – just six weeks in which the grizzlies gather to feast on the spawning salmon, piling on the pounds before hibernating in the limestone caverns that honeycomb Bear Cave Mountain – and the Fishing Branch River is the key to it all. Fed by underground springs, it remains unfrozen all year round, and every autumn 35,000 chum salmon make the 2,410-kilometre odyssey from the Bering Sea to spawn in its pure waters.

At times there are so many fish in the river you feel you could walk across it on their backs without getting your feet wet. The salmon in turn attract the grizzlies – as many as 40 every season – and as they wade through the river, an extraordinary transformation takes place. Within minutes their wet fur freezes in the sub-zero temperatures and they become ice bears – to the delight of wildlife photographers from all over the world who come to Bear Cave Mountain to witness this unique spectacle.

On my first morning I grab a hot coffee and step out into the bone-clenching chill of a North Yukon dawn. The sky is clear but sun-up is still an hour away as Timpany and I walk down to the river with Smoky at our heels.

The stage is set

The lodge is set on a bend of the river with Bear Cave Mountain and its limestone pinnacles on the other side, creating a natural theatre. Now the stage is set.

Locked in an all-embracing silence, we sit on a log at the water’s edge and wait for the first bears to arrive as ravens flit through the trees like souls. The river flows past us swift and shallow, its gin-clear waters an angler’s dream, alive with the outlines of spawning fish.

Some mornings, says Timpany, he sees moose by the riverside; caribou and wolverine, too; and at night when the aurora borealis swirls and flickers overhead he listens to the eerie harmonies of wolves in the spruce forests. Even when no bears are in sight, their spine-tingling presence is all-powerful; but we do not have long to wait.

Out of the mist hanging over the river looms a dark apparition. It’s the big male called Stanley, patrolling the riverbank with a rolling swagger as if all this wild land belongs to him.

Eleven years old and just entering his prime, he is the spirit of winter made flesh and bone, resplendent in his ice-armoured coat. Stanley has evolved an efficient way of fishing that Timpany calls snorkelling, wading with his head under water until he spots his prey, then charging after it in a welter of spray to emerge with a metre-long salmon in his jaws.

When Stanley has ambled on upriver, Timpany tells me about his life in grizzly country. In his early years he worked as a guide for trophy hunters from all over the world.

“And do you know what?” he says. “Whenever they shot a bear they would walk up and kick it and say: 'I got you, you sonofabitch’. They had no respect for the animals they killed and it still makes me sad to think I was responsible for their deaths.”

In the end he got sick of bloodletting and got a job studying chum salmon until he moved to Bear Cave Mountain in 1991. Today, at the age of 60, having spent more than 2,000 days in the company of grizzlies, he has come to know them better than anyone.

“They are such forgiving animals,” he says. “When you enter their world you realise what a peaceful coexistence they enjoy.”

His relationship with bears is based on mutual respect, exploding the grizzly’s fearsome reputation as a natural-born killer. “The whole ethos behind wildlife management involving bears is 100 years out of date,” he declares.

Every year in the Yukon, an average of around 86 bears are killed “for fun” as he puts it, and another 350 grizzlies are shot by trophy hunters in neighbouring British Columbia. “We are at war with the grizzly,” says Timpany, “and the grizzly is losing.”

Meanwhile at Bear Cave Mountain the grizzlies live on, unaware of the shadow hanging over the future of their species. Soon they will retire to their dens, and so must feed and fatten as fast as they can while the fish are still spawning.

Across the river another bear has appeared from the willow thickets. It’s Mrs Tucker again, with her cub at her side, close enough for me to hear the crunch of bones as they feast on the carcass of a freshly caught salmon.

This article was written by Brian Jackman from The Daily Telegraph and was legally licensed through the NewsCred publisher network.

The Best Tickets In Las Vegas