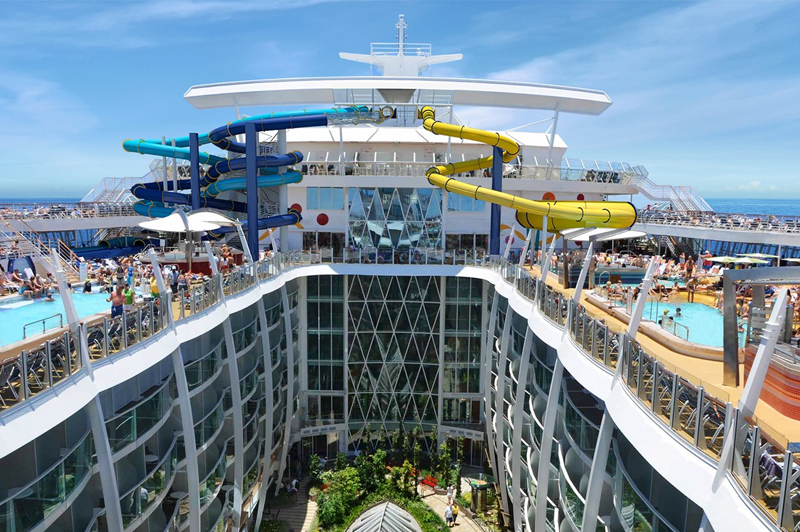 It's not every year the world's largest cruise ship and most luxurious cruise ship make their appearance. But that's exactly what we have to look forward to in 2016. Throughout the year – which is shaping up to be the most telling chapter in the evolution of cruise holidays for some time – almost every new oceangoing vessel launched will be first-in-class, largest-in-fleet, or both. Beyond the requisite flashy features we've come to expect (multi-storey water slides or the world's largest cruise suite anyone?) we'll also see thoughtful inclusions addressing the needs of the expanding and maturing cruise market – new culinary experiences, technological advances, and an emphasis on multi-generational and family offerings. Here we countdown the six most anticipated cruise ships taking to the seas next year in chronological order – just another half dozen reasons to consider a cruise holiday in 2016.

The aptly named ms Koningsdam ("Koning" means "king" in Dutch) will become the largest ship in Holland America Line's fleet when it launches next year, heralding the dawn of its new Pinnacle Class vessels. The interior design was inspired by the "architecture of music" – think graceful lines, dramatic textures, lighting effects and use of materials. An example is the three-deck, skylight-capped atrium, with its stainless steel sculpture reminiscent of a string quartet. Classic Holland America touches including the teak promenade and Culinary Arts Centre are a nod to the line's identity past and present, however the ship will debut some exciting features too. The new family oceanview cabins (room for five people and two bathrooms) and a dozen single oceanview cabins (between 127 to 172 square feet) will be music to the ears of family and solo cruisers respectively. Launching in April 2016, ms Koningsdam will accommodate 2,650 guests and sail the Mediterranean, Northern Europe and Caribbean during her maiden season.

In March 2016, the Ocean Princess will undergo a $40 million refurbishment over 35 days – rejoining the Oceania fleet as Sirena. As the elegant sister ship to Regatta, Insignia and Nautica, Sirena will bring together the most treasured elements of this celebrated fleet and – true to siren mythology – lure cruisers with a few highlights all of her own. The Owner’s and Vista Suites have been completely re-imagined and will feature custom furnishings enhanced with dazzling fabrics, rich walnut and stone accents. Gourmand's can take a seat at one of two fresh culinary offerings: the new specialty restaurant Tuscan Steak (serving Italian favorites, succulent steaks and fresh seafood) and Jacques Bistro (a surprise lunchtime transformation of The Grand Dining Room serving timeless French fare). Launching in April 2016, Sirena will accommodate 684 guests and sail the Mediterranean, including two voyages headed as far west as Lisbon and Seville, during her maiden season.

Viking requires little introduction when it comes to river cruising, however it's still the new kid on the high sea (the company's first foray into ocean cruising came in the form of Viking Star which debuted in 2015). As it turned out, the features borrowed from the line's innovative river Longships – clean Scandinavian design; an emphasis on green practices; signature indoor/outdoor dining venue Aquavit Terrace – translated extremely well to its oceangoing counterpart. Guests can expect more of the same with Viking Sea. Viking's second outing will be positioned alongside the smaller vessels sailing the world, however it's packed with features. Even the smallest cabins boast a king-sized bed plus a balcony. The line will also introduce complimentary beer and wine at lunch and dinner, in addition to some complimentary shore excursions. Launching April 2016, Viking Sea will accommodate 930 guests and sail the Mediterranean, North, Baltic and Norwegian seas up to the Arctic Circle, during her maiden season. Viking Sea will share many similar features to her sister ship, Viking Star. Find out more in the video below.

4. Harmony of the Seas, Royal Caribbean

How could we leave the world's largest cruise ship ever off this list? Royal Caribbean already holds the record – a title shared by Allure of the Seas and Oasis of the Seas – but will outdo itself again in 2016 with Harmony of the Seas. Measuring 362.15 metres (1,188 feet) from bow to stern with 2,747 cabins, the 16-deck leviathan will feature three multi-story water slides, robot bar tenders (as seen on the aforementioned Oasis class ships) and a "handcrafted" carousel. We could go on and on about the features... and we will. The floating city will be divided into seven neighbourhoods: Central Park, the Royal Promenade, Boardwalk, the Pool and Sports Zone, Vitality (spa and fitness), Entertainment Place and Youth Zone. In addition to its own Starbucks, two new culinary concepts will be debuted – Izumi Hibachi & Sushi and the Sabor Modern Mexican. The cruise ship will also bring Grease the musical to the high seas for the first time and offer "the fastest internet connection at sea". Launching May 2016, Harmony of the Seas will accommodate 5,479 guests and sail the Mediterranean initially, before being re-positioned to its permanent home of Port Everglades sailing the Caribbean for winter 2016/17.

From the world's largest, to the world's most "luxurious ship ever build" (or so says Regent Seven Seas Cruises of its first new ship in a decade). Seven Seas Explorer will be an all-suite, all-balcony vessel that is larger and even more contemporary chic than its fleetmates Mariner, Voyager and Navigator. The ship will be home to the Regent Suite – the largest cruise ship suite the world has ever seen at 3,875 feet – with two plush bedrooms, an expansive living space and a beam-to-beam private outdoor balcony. Seven Seas Explorer will feature the brand’s first culinary instruction centre, the Culinary Arts Kitchen, providing guests with personalized instruction at eighteen individual cooking stations. The line will also debut two new gourmet restaurants on board including Chartreuse, inspired by the finest eateries in Paris, and Pacific Rim which offers a gourmet dining experience celebrating Asian cuisine. Launching August 2016, Seven Seas Explorer will accommodate 750 passengers and sail the Mediterranean during her maiden season.

Seabourn Encore is being fashioned with modern design elements, contemporary interiors and innovations consistent with the Seabourn’s reputation for understated elegance. Seabourn Encore will be 26% larger than the line's three existing Odyssey Class vessels carrying around an additional 150 passengers. This allows for an additional deck, new expanded public areas, and private verandas in each of the 300 suites. Seabourn has advised that the architecture of the ship will not be radically different from other three, but guests can expect a noticeably bespoke aesthetic, design elements often found in private yachts, and "an impressive array of unexpected surprises". As Australians, we'll be among the first to find out what these might be. Seabourn Encore will sail our waters after her maiden voyage from Singapore to Bali (which sold out in just two days). So don't miss the boat... or ultra-luxury yacht. Launching December 2016, Seabourn Encore will accommodate 604 passengers and sail the Java, Coral and Tasman seas during her maiden season.